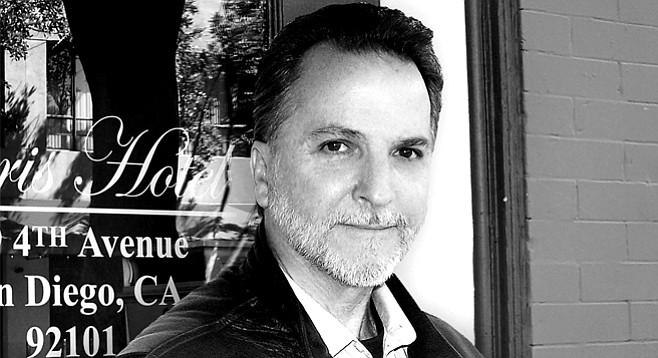 David Grant Urban was a fit 50something who had just finished hiking Mount Whitney when he found a lump on his neck. “I went through cancer treatment with three other people, and they all died,” he recalls. “I told myself, If I survive this, I’m going to get serious about my writing. And I did.” Fat Dog Books published his novel, A Line Intersected, on November 3rd of last year.

He started by studying his favorite authors. “Not just reading — studying. I followed Raymond Chandler’s advice: take a scene from an author you like and rewrite it. Do it from memory, and then compare them: your first sentences, your metaphors and similes, how you lead the reader, image by image. You start learning the craft behind the magic. I remember doing the awesome opening scene in The Big Sleep where detective Philip Marlowe first meets General Sternwood in that greenhouse full of orchids. I’m not going to come up with a better simile than when he described the orchids as feeling like the newly washed fingers of dead men, but I got to a point where I felt comfortable writing a scene like that.”

Local history provided his protagonist’s crisis. “In 1990, Cleophus Prince, Jr. committed a series of horrific murders here in San Diego. His first victim was a girl named Tiffany Schultz; he just brutally destroyed her with a knife. When her boyfriend Christopher James Burns came home, he discovered her dead. He called the police, and they promptly arrested him and threw him in jail for three days. Everybody thought he had done it — the papers, even her family. She had been a nude dancer and they figured it was a jealous rage. In interviews, he talked about what a horrible experience it was — first losing a loved one and then going through all that. I got to thinking that something like that could happen to anybody. My book’s title is about lines of good and evil and what happens at the point of intersection. I wanted to explore that, using Burns’s ordeal as a kind of basis.”

And San Diego provided his setting. “I love this town — it’s the biggest small town in America — and I know it so well.”

Urban was born in Mercy Hospital, grew up in El Cajon, and has spent time exploring San Diego’s homeless encampments, its monster mansions, and everywhere in between. The story ranges from the De Anza Angel outside Borrego to the (only slightly) less historic Gaslamp Quarter.

“I spent a lot of time looking at the plaques on the buildings. There’s a lot of history here that gets hidden away.” A lot of other stuff, too. “San Diego is light and bright and clean, but if you scratch the surface, you find it’s corrupt. No one seems to care until it affects them personally. My novel’s hero is a DINK yuppie with a beautiful wife and a promising career, and then this horrible thing happens and he’s just chewed up. He’s yesterday’s garbage, and nobody really cares except him.” That’s when the hero has to get serious.