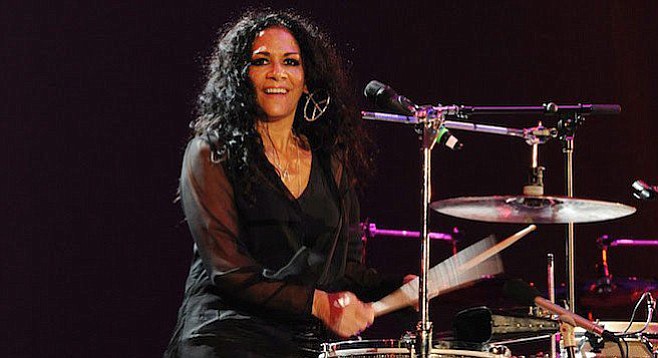 Sheila E. and her own drum

Latin percussionist/bandleader Sheila E.’s local connections are deep. Uncle Javier helped bring punk to San Diego when he launched the Zeroes in 1976. Uncle Mario has long been a vital part of the rock scene with his 14 years and seven albums with the Dragons.

“I remember stopping by my grandfather’s house in Chula Vista when we played with Ringo Starr [in his All-Starr Band].”

"The Glamorous Life" live in Oakland in 2011

And then there’s the Tijuana/Carlos Santana connection and her romance with him when Santana was 36 and she was 18. That tidbit is part of her autobiography, The Beat of My Own Drum, released last year.

In a recent interview with the Reader, Sheila E. was not apprehensive about sharing other saucy items, like how she left high school at 15 to tour with her father, the Pete Escovedo band.

But prior to the interview, it was made clear that she didn’t want to spend a lot of time on Prince. The two met when she was 21, became romantically involved, and toured together on his Purple Rain tour.

“It was not my desire to not talk [about Prince’s death]. I was asked by Prince’s family [to be the spokesperson]. I didn’t want to, but there was no one else there to do that. It was one of the most challenging things I had ever done.

“Loss is hard to deal with. It’s part of life. We’re all going to pass at some point. It’s not that I’m tired of talking about it. It’s just that it’s challenging. I lost a lot of people in the last couple of months. In family, when you lose someone, it takes a minute.”

Sheila E. returns to play her first local show since the passing of her ex-bandmate and fiancé Prince.

“I think it’s my first show in San Diego in four years,” she says.

Her current touring band “...is eight, including me. Sometimes we’ll go all Latin-jazz. Sometimes we’ll put in more pop or R&B. Our shows and the arrangements change weekly. By the time we play [Fallbrook] I don’t know if we’ll be on plan a, b, or c. I always try to involve the other members as much as possible when we put the show together.”