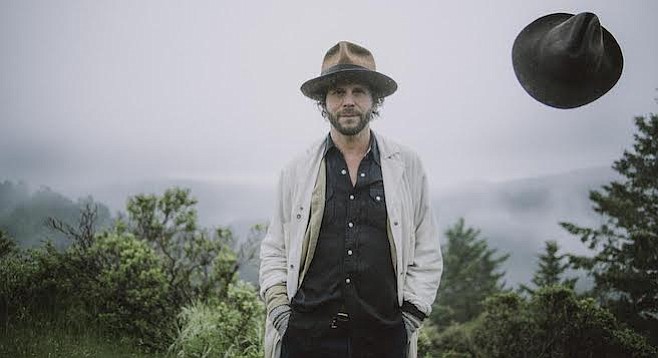 You can’t not look at Langhorne Slim

Don’t wait for a yodel. It will not come.

“Life is confused,” Langhorne Slim sings, “and people are insane.” Slim’s a 37-year-old singer/songwriter oft-branded as alt country. “Can we be happy for a while/ Can we just sit down and shut up and smile?” Slim favors acoustic guitar, string bass, and pedal-steel guitar. Those are sounds that take you to a place from which there is no escape. Beards and felt hats. Denim jackets. I keep waiting for the yodel that does not come.

Langhorne Slim & the Law, "On the Attack" (Live in Knoxville)

Then again, I don’t think of Langhorne Slim much as a country act. It’s a sound he wears, and it’s a good fit, and the show is captivating. You can’t not look at Langhorne; you can’t un-hear his voice.

So, who is this guy? His real name is Sean Scolnick, and he’s from Langhorne, Pennsylvania. He graduated high school and landed in New York for a little college and a lot of open mics. He worked out of the Sidewalk Café, one of those make-or-break places like Java Joe’s in San Diego. The Trachtenburg Family Slideshow Players dug his act and took him around the country, and Europe, too. After, Slim gigged as an opener for arena acts he had little in common with, like Grace Potter and the Nocturnals. He moved to Northern California. I wondered if Langhorne Slim was a character that Scolnick played, or if the two were one.

There’ve been nine albums since 2004. The rock press practically oozed love in their reviews, comparing Slim to Leadbelly or Dylan. Now out with a five-piece in support of last year’s Lost at Last Vol 1, Langhorne Slim is a headliner.

Some might complain that early Dylan was about social change, about ending a war, but no matter. The music industry continues to subsist by reliving the past, even if it’s without cause. There is not a thing wrong with good music done just for the heck of it.