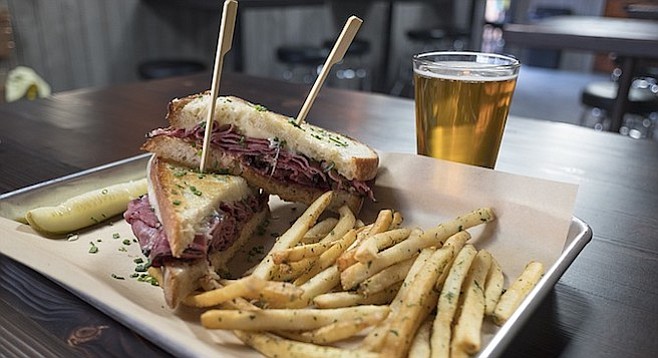 Even a sandwich snob likes a deal

Working Class beer combo gets it a second look

At the North Park street corner where Ritual Tavern sat for the past decade or so, a new, neighborhood-oriented bar and eatery has opened, refurbishing the space and offering a different interpretation of the gastropub concept. They call it Working Class, which seems like solid branding these days. In the event someone like me comes along to say it's not very good, everyone can just chalk it up to white-collar snobbery. Which it might well be.

But I'll start by saying this: there's plenty to like about Working Class. It's designed to be bright and wide open, giving the interior plenty of sunshine during the day. In the front, bright blue storage container siding meets the striking contrast of an orange-stained wood pergola framing a patio that feels connected to happenings along busy 30th Street. 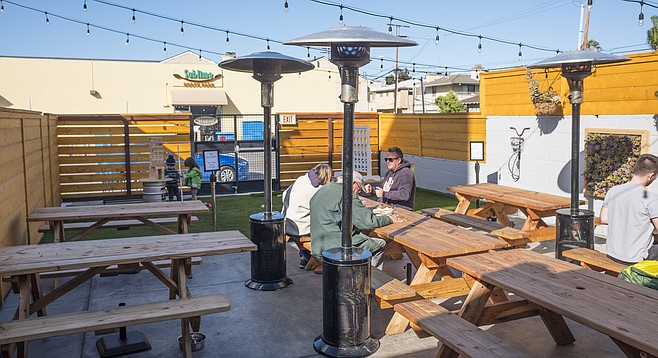 Kids and pets get the best part of Working Class: the back patio

Like the restaurant itself, these happenings usually involve food and craft beverages. Specializing in American-style comfort food, Working Class's prices are great for a table service restaurant, particularly by North Park standards. A menu of all-day breakfast and lunch plates start at $8, with dinners topping out at $12, and a three-hour weekday happy hour boasting $5 starters and $4 pours. The menu of brews gets handily divided into styles of beer (hoppy, malty, sour, etc.), with tags distinguishing not only which beers were produced in San Diego but which are local to North Park. 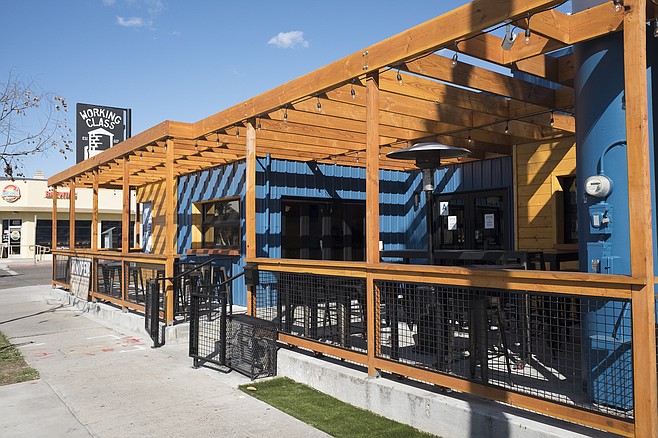 Beer and wine list aside, Working Class aims for a family and pet-friendly environment, to the extent it furnishes both kid and dog menus. However, nearly the entire front portion of the restaurant, interior, and patio is bar stool seating only, a fair amount of it belly-up to a long, wraparound bar.

Better for families and fur kids is the spacious back patio. It's a whole other world back there, made of bright green artificial turf and wood-bench picnic tables. Whereas the inside walls are dominated by TVs tuned to sports, out back there are living wall planters and heat lamps.

Even if nothing really stands out as distinctive, there's a little something for everyone, and it makes a solid addition to the neighborhood in that regard. There's only a problem if the lack of distinction carries over to the food. Alas, at first taste, I found myself struggling with a too-bland burger and a too-sweet (yet otherwise bland) fried chicken sandwich.

Disappointed with the sandwiches, I returned to try one of the working class themed dinner entrées. It was either going to be the Salisbury steak plate or the chicken pot pie, but somewhere in my deliberations I finally noticed a deal I had missed. For five bucks you can add fries and a half pour of beer to any sandwich order.

That brought the sandwiches back to my good graces. I decided to check out the pastrami Reuben, grilled on sourdough with sauerkraut and melted swiss, then added a favorite local Belgian style ale, the Lost Abbey's Devotion, to go with the crisp, parsley seasoned fries.

I enjoyed the meal, but like the burger patty before it, the pastrami itself didn't offer as robust a flavor as I expect form that most glorious deli meat. However, I enjoyed the diced scallions tossed over the crispy grilled sourdough, and it tasted like caraway seeds were added to some component of the sandwich as a creative sort of rye-bread reference.

That showed me, finally, that food here isn't entirely erring on the side of mild. I do view it as an accomplishment that Working Class's community-friendly amenities manage to add value to a neighborhood that wasn't exactly aching for a new beer-and-grub spot. But until I eat something more memorable, it won't be one of the first places that comes to mind when I want to eat in North Park, unless my dog is with me.

This place has changed a number of times, mostly being a cheap diner. So I'm not surprised it's nothing to write home about.