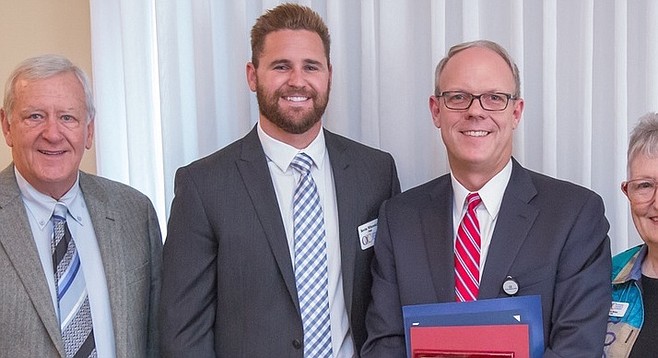 “Oceanside is a big city. But it’s just like a small town. You can’t keep a secret here.”

That’s from one of 23 candidates who applied for a vacancy created on the city council that became available when two council incumbents, Esther Sanchez and Chuck Lowery, ran for the same seat. When Sanchez defeated Lowery for the newly created District 1, it left her old seat, called “at large,” vacant. A replacement to fill the two years remaining on that seat must now be named by council appointment or by election.

That December 19 meeting was the first for Councilman Christopher Rodriguez, newly elected to District 2. “It was clear the only thing Christopher came prepared to do was appoint Kevin Witowich,” says one of the applicants who admits to having little chance at getting appointed, and who did not want to be identified for this article. “Witowich is the only name I’ve been hearing over and over from everyone in and around city hall," says the applicant. "Witowich was at that [December 19] meeting. And that was the first time I ever saw him at a council meeting.”

The applicant says this done-deal arrangement is wrong for a number of reasons. First, he says it violates the spirit of the Brown Act which is supposed to prevent council business from being done outside of city council meetings. “If he is already picked, it makes a joke of the whole process. If the council did a daisy chain communication on this and it could be proven, it would be illegal.”

The applicant says the appointment of Witowich would give the council a supermajority of pro-business/pro-developer members. In the last election, Carlsbad and Escondido both moved away from Republican majorities to Democrat majorities for the first time in recent memory. An appointment of Witowich or a like-minded citizen would create a four-member pro-developer/pro-business majority with the loss of Democrat Lowery.

Witowich is the immediate past chairman of the Oceanside Chamber of Commerce. A financial advisor, his business, BBVA Compass Investments, is based in Carlsbad.

Rodriguez was just elected with the help of L.A.-based California Real Estate PAC, and Illinois developer D.R. Quality Homes who gave his campaign $5,000 and $500, respectively. Rodriguez made it clear throughout the race he was running as a pro-business, pro-development Republican.

Rodriguez said by phone that he had heard the appointment of Witowich has been identified as a fait accompli by Oceanside citizens. “I’m seeing it over and again in conversation.” Rodriguez does not deny that he has in fact posted glowing reviews of Witowich, but that, “There are other outstanding candidates. I am meeting with everyone. I have not yet made a decision. To everyone who says there is a conspiracy and we are backdooring this, I say not true. I have not yet made a decision.”

Rodriguez says diversity on the council is a good thing and that he may use that concept in guiding his appointment vote. “We need to make sure that all members of the community and all viewpoints are represented on the council.”

Rodriguez says it makes no sense to spend between $500,000 and $700,000 on a special November election that would result in the winner spending less than one year in office for the at-large seat that would be phased out after November, 2020. Although he said at the December 19 meeting he was ready to make a decision then and there, Rodriguez now says it is better that the four councilmembers get to meet with each applicant individually.

He says the summertime appointment of Mayor Peter Weiss to replace Jim Wood who retired due to health reasons was made “on the spot,” and that may not have been the best way to make that appointment.

The applicant I spoke with, however, thinks the fix is in and that Witowich is the man.

“Plus, I want to know why Witowich who has a Carlsbad business, is with the Oceanside Chamber of Commerce and not with Carlsbad’s,” asked the would-be appointee. “Even though [Witowich] is coming in as this fresh new face, he is still running on the same old Republican/pro-business ideology. If you ask me he is Chris Rodriguez 2.0.”

A call to Witowich was not returned.

Witowich attended the December 19 meeting accompanied by Oceanside Chamber of Commerce chief executive officer Scott Ashton who regularly speaks before the council in support of new development. Ashton spoke at a May council meeting when supported the so-called “prison hotel” development on Oceanside Boulevard, a five-story development which was submitted by a business that was forfeited and was not allowed to do business in Oceanside. Every one of the 25 neighbors who spoke up said they were against the development while Ashton said he and the chamber were for it.

“Even if a Brown Act violation is not verifiable, the appointment of Witowich would diminish any faith that our council could act in a transparent an honest manner,” says the appointee.

This is the first year Oceanside district elections were phased in. Only Districts 1 and 2 were on the ballot this year. Districts 3 and 4 debut on the 2020 ballot. Due to the luck of the draw, Lowery was named as this year’s District 1 incumbent and Sanchez was to remain in one of two “at-large” seats. Sanchez opted to run in District 1. When she won, she tossed fellow Democrat Lowery out of office.

escondido has not had a left of center majority since Jerry Harmon got two like minded members elected in 1988. From what I have been told by people who know, Carlsbad has never had a left of center majority in its 66 year history as a city. until now. However there have been people elected here and there who didn't think developers should be able to do whatever they want including the late USMC Colonel Anthony Skotnicki and former asst. D.A. Mark Petine

Over many years, and no matter who was on the council it was a "snakepit" of rivalries and dysfunction, as described by many observers. In recent years it did seem that the councilmen/women were too often ignoring the desires of the electorate and beholden to developers. But there are other matters that should be of concern to Oceanside residents such as the police department and the fire department. Both have histories of citizen abuse and internal wrongdoing, all of which have cost the city $ millions. Is anything new going on in those departments? Maybe, but if there is, it seldom or never is reported. Look at the work history of the current chief of police; it is hard to imagine any city hiring or keeping anyone with his record in that office, but there he is. Party affiliation seems to have great importance these days, even in "non-partisan" city and other municipal elections. Yet those party connections generally are irrelevant to local matters. Calling anyone who is registered Republican as automatically lax on developer abuses denies some truly bad decisions that were fully supported by Democrats. "Pro-business" should be seen as a virtue, not as a sin. But pro-business doesn't mean that every unwise, cockamamie scheme is approved. If you want a prosperous city, it needs businesses and successful ones at that. It's all a matter of balance. Pay attention to who gets your vote, and then expect campaign promises to be kept. When an official strays from the announced path, vote him or her out. Simple.

Interesting that Chris Rodriguez today is now saying the article is an example of "poor reporting." Funny, when we spoke last week he admitted that he was aware that social media was in fact overrun with comments that said the Witowich appointment was a done deal. He denied that and said he had open mind. I quoted him correctly and he had no issues with how I quoted him when I spoke with him face to face two days after the article came out. So why now, a week later, is he saying it was poor reporting? Hmmmmm.... Could it be that maybe he is getting upset because IT WAS a done deal and that Witowich WILL get the appointment tomorrow. I find it odd that the OPOA endorsed Witowich without interviewing other candidates. I sent a question to Mr. Ridenour about that and am looking forward to his response. I also find it odd Mr Witowich did not bother to return my call. Hmmmmmm..... He wants the job but he wants to keep his background secret? That's what Victor Roy did.