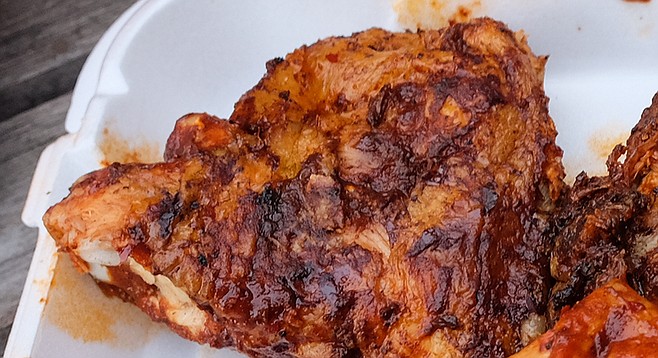 Give this pollo a good home

It must be what backyard barbecues in Acapulco taste like

In the parking lot in front of the Rainbow Farms Supermarket (4727 Federal Blvd., Chollas Creek) sit a grill and smoker, a back of mesquite charcoal, and flag sign reading: “Pollos Estilo Acapulco.” Chicken, Acapulco style.

What is Acapulco style? That question brings me inside.

It's not a reference to decor. Immediately to the left as I enter, I find the bare, white tile takeout counter called Jose's Pollo Estilo Acapulco. There’s no sign or menu on display, so I have to ask to make sure. 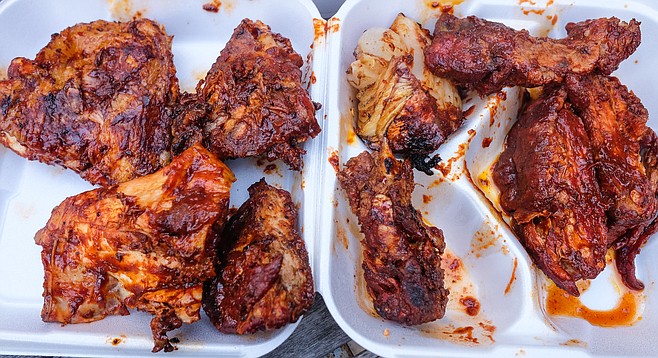 Order the 1/2 for $11 to receive this much grilled meat, plus sides.

I’m wrong about the menu, sort of. The woman working the counter calls my attention to a handwritten menu taped to the counter top. It’s a laminated sheet of ruled paper, torn from a spiral notebook, and at the top it reads, “Pollo o ribs,” followed by a list of fractional numbers and prices. The number 1 goes for $18.50, followed by ½ for $11 and ¼ for $8. 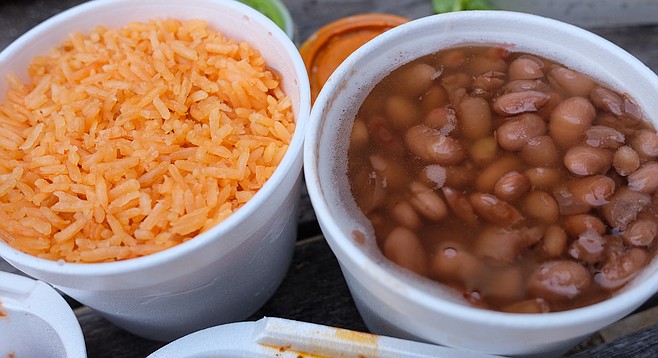 Tubs of beans and rice complete the Acapulco BBQ meal. 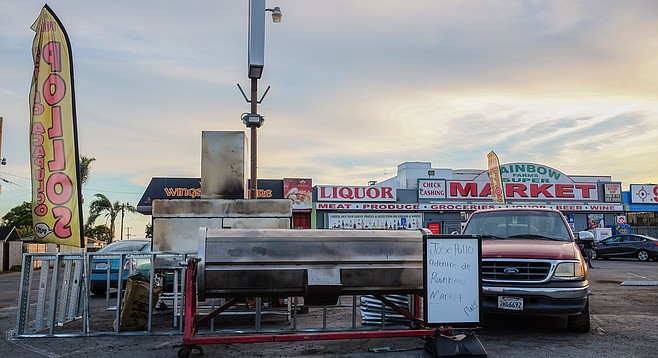 For BBQ in the style of Acapulco, look inside the supermarket.

However, beneath the “o” is written a “y.” So instead of “chicken or ribs,” you may view the menu as “chicken and ribs.” And the same prices apply. It’s a little confusing, but bottom line is, for eleven dollars I get about a quarter rack of ribs, and a quarter chicken. Beans, rice, and corn tortillas are never mentioned, but they are included: half pint tubs of the sides, about a dozen warm tortillas. There’s also half an onion, grilled into sweet translucency.

First thing to note: these aren’t the small chickens commonly cooked at rotisserie, so along with the sides, the estimated quarter chicken I happen to get — mostly breast and thigh pieces — would be enough to make a meal. Add in the ribs, and $11 here will amply feed two people.

The second thing to note is the sauce. The woman offers me a choice between BBQ and “Mexican” sauce, and because I’m seeking “estilo Acapulco” here, I choose the former. And I suggest everyone does.

It's takeout only, so a pile of grilled meats are served to me in styrofoam. Both chicken and rib pieces are slathered in a thick, smoky chipotle BBQ sauce. It’s savory, surprisingly complex, and though I initially think it mild, the spice creeps up on me. It especially lingers in the charry crisp edges of the chicken, which are delightfully loaded with sulfuric heat.

I’ve never been to Acapulco, but this chicken reminds me of just about every suburban backyard barbecue I went to while growing up. Except with better sauce. As to the question of “pollo o ribs” or “pollo y ribs,” I’d say start with the chicken. The sauce is the star here, the ribs are not.