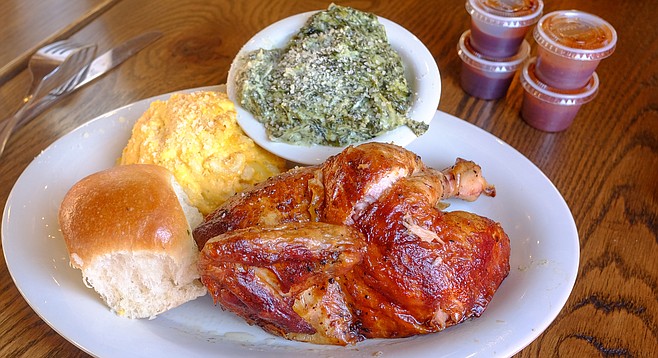 Hopefully, I’m not alone in confusing San Diego’s collection of ranch communities. We have Bressi Ranch, Scripps Ranch, and Carmel Mountain Ranch, plus lesser knowns Black Mountain Ranch and Fairbanks Ranch. Most are suburban enclaves clustered within the broad expanse between the 5 and 15 freeways in North County, making them easy for outsiders to confuse, even without the slew of adjacent Ranchos: Bernardo, Peñasquitos, and Santa Fe.

As of this weekend, though, I do have a more lasting impression of 4S Ranch. A good meal will do that. 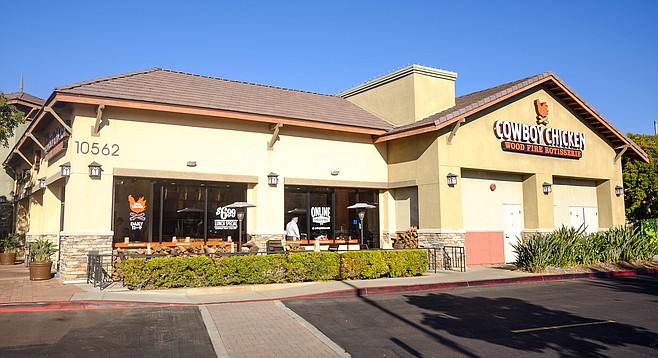 The unincorporated area sits roughly between Rancho Bernardo and Rancho Santa Fe, to the south of Lake Hodges. Histories of the place note it was part of a massive allotment of grazing lands granted English-born Joseph Snook in the mid-19th century. The most interesting thing about him is that San Diego was part of Mexico back then, so he became a Mexican citizen, and renamed himself Jose Francisco Snook.

He called his 17 thousand acres Rancho Bernardo, but after his death the whole thing was divided up, and 4S Ranch remained undeveloped agricultural land until the 1980s. And like most 80s developments, 4S Ranch has lots of stucco tract homes and shopping centers built around large parking lots.

It within one of those that I found Cowboy Chicken. It’s part of the 4S Commons Town Center, along with a Panera Bread and something called a Mathnaseum, though it’s most recognizable landmark would be the Karl Strauss Brewpub.

I’ve since learned Cowboy Chicken is part of a Texas chain of restaurants that’s been slowly inching its way towards California, “Proudly serving all-natural, hormone free chicken since 1981.”

I did like the sound of that, and especially the sight and smell of it. Stepping inside the restaurant, the first thing I noticed was a large brick rotisserie oven, with a window built into it where I could see two dozen whole chickens turning on rotating spits, in front of a wood-fueled fire. If the aroma of roasting chicken and burning oak doesn’t make you hungry, then you and I have little in common.

The place serves chicken sandwiches and enchiladas, but for $9.49 I opted for a combo of half chicken and two sides. Sides include baked sweet potatoes, ranchero beans, and corn fritters, which might have enticed me if there wasn’t mac and cheese or creamed spinach.

These sides honestly disappointed me a bit; the mac could have used a little more flavor, the creamed spinach less. But the main attraction didn’t fail me one bit. Rubbed with a light blend of salt, pepper, and cayenne pepper, the wood-fired chicken boasts crispy skin, and rich smoky flavor permeating into sumptuous light and dark meats.

Though a counter restaurant with a self-serve soda fountain, Cowboy Chicken operates a step above most fast casual joints, from a service standpoint. Employees continuously checked in to make sure I had any necessary silverware, barbecue sauce, and beverage at my table, and bussed my table when I was done.

It makes literal sense a business called Cowboy Chicken would choose a Ranch community to post one of its first California locations. I just find it ironic it took a Texas restaurant chain to help me find 4S Ranch on the map.

So it's like El Pollo Loco, but not "Mexican" influenced? And maybe a bit better?

FYI: 4S Ranch was owned by the Ralph's Family, the founders of Ralphs groceries. It was supposedly their family retreat and a working ranch.

Interesting about Ralph's, thanks. I believe El Pollo Loco is grilled, not rotisserie. A local restaurant like El Pollo Loco but better is Don Pollo in Poway: https://www.sandiegoreader.com/news/2...

Thanks for that reminder on Don Pollo, it's been stuck in my Yelp list forever! I'm anxious to try both places.