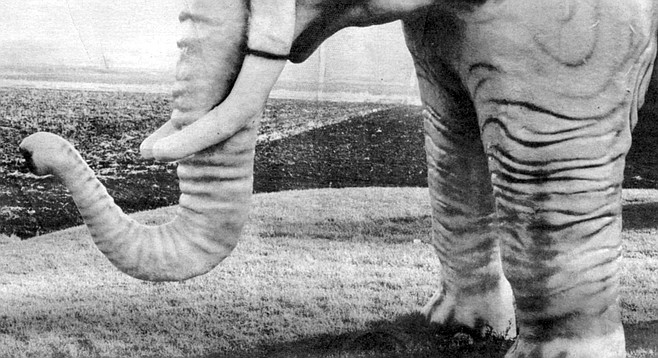 The San Diego animals worth watching for 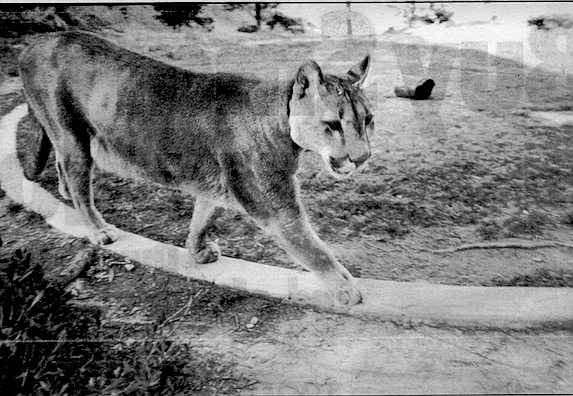 Shucks, who was born in Lakeside of a female from Paraguay, ought to be smaller than he is.

How much is that bobcat in the window?

“And if these animals are so happy and so tame, then why are they kept in cages?" asks Martha Hall, who runs a wildlife rescue center in Alpine. In the case of Mrs. Wolfs cougar, the cage protects the animal from people, not vice versa. But Hall dislikes all cages—especially the ones she must clean every day. 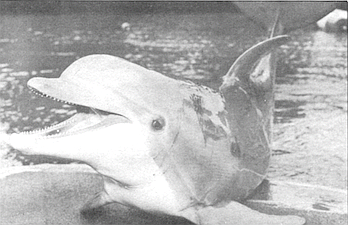 The secret life of dolphins

“Sure, you can say that the dolphin saw the human, realized he was in trouble, figured out what it would have to do, and then took appropriate action. But alternatively, you can realize that dolphins have a strong maternal instinct for keeping their own young in touch with the surface."

Phil Unitt: “There are six ibis that stayed all summer in this lagoon.”

Visitors on the wing

Wilson’s phalaropes fly south as early as mid-June, a time when willow flycatchers are just arriving in San Diego for the summer. Among the later fall migrants are some species of hawks, who don’t begin their migration until October. At that time they can be seen gliding high above coastal ridges like the one along Point Loma. 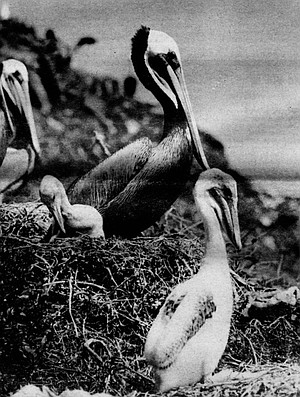 Brown pelicans on the Coronados. "If pelicans don’t breed now, it’s because people are going into the colonies and bothering them, or because their food supply has disappeared.”

The group raced back to the mainland and Jehl immediately headed south. In San Diego he grabbed a boat and motored out to the Coronados, where the scene was even worse than that at Anacapa: out of 350 to 400 nests, no young survived. Further south, on Baja's San Martin and San Benito islands, the toll was less dramatic, but still abnormal. Everywhere, Jehl found strange, deformed shells. 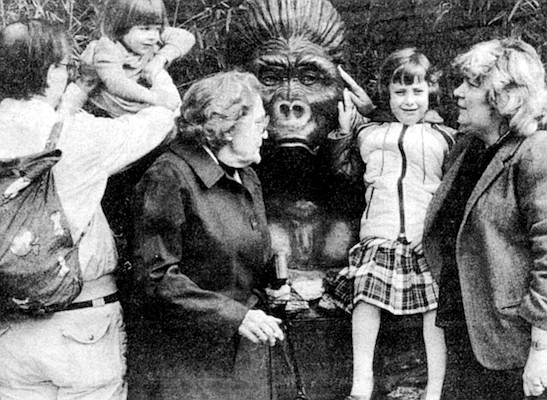 Family with gorilla statue. ‘‘Man is the animal who knows he must die.”

You tell me why, what, keeps my stub-toed Frye boot from kicking, jabbing the open-toed lavender sandals, nylon-encased toes; what stays the hand from grabbing the gray-suit lapels, from turning that wood-laminate table over; what keeps the mouth, tongue from yowling, screaming, howling; what holds a person back from breaking out, breaking up, breaking loose. 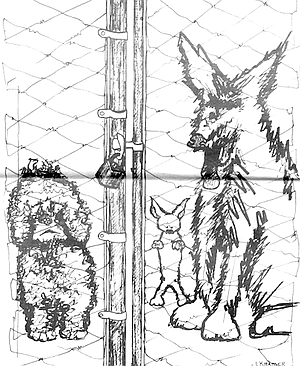 Because of its proximity to Mexico, San Diego County has been designated as a rabies area.

Going to the dogs

We had to appear before the judge. We had to wait with traffic violators, petty thieves, drunken drivers. You have the right to plead guilty or not. Since our dog had leaped the fence, we pled guilty. Result: a firm reprimand and a stiff fine of $50, twenty of which was suspended “until the next time.” 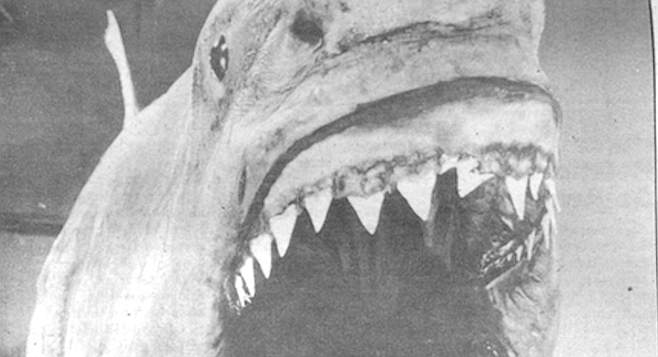 Of the 250 known species of sharks about 30 can be found in and around the waters of San Diego.

The better to eat you with my dear!

In 1959, the year Bob Pamperin was killed, there were dozens of sightings around La Jolla. City lifeguards, who set up a shark patrol that summer, pulled a number of Blues and Hammerheads out of the water. It was thought that a large female White must have “pupped" in the Cove early that summer since a number of “baby" White Sharks, four to five feet in length, were taken from the water.