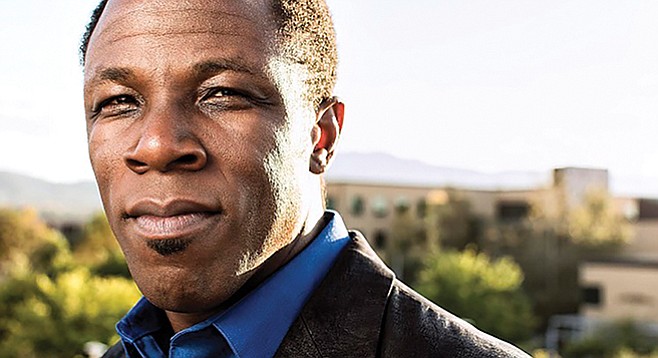 “I realized, I gotta keep this thing going. I’m not going to stop,” says vocalist Leonard Patton regarding the ups and downs of running his own performance space: LP’s Jazz Vibe. Patton started his project in response to an ever pressing need.

“We’re always having this conversation about places to play. The San Diego jazz community is thriving, but there is a definite lack of venues, which are usually tied to a restaurant, bar, or hotel. Those places are always at the mercy of management — which can change at the drop of a hat. Even if the music is really slamming and bringing in money — everything is temporary. I was looking for something that wasn’t tied to those variables, where the music was the first thought rather than the last one.”

So Patton kept his eyes peeled for an opportunity.

“I actually found a place in Eastlake. A little warehouse to sublet from a guy who was running a music school in the front. I started LP’s Jazz Vibe there, and we had two great shows featuring groups led by Joshua White and Curtis Taylor. All of a sudden, the owners sold the building, and we lost our part of the lease.”

“I already had concerts booked and I didn’t want to cancel, so I found other places to carry on the LP’s Jazz Vibe concept until I can find a more permanent home. One place we’ve set up shop is downtown in the East Village at Mission Brewery. It’s a nice little space and we’ve done a handful of shows there, primarily on Thursdays when there’s no Padres game, which makes parking more realistic, [Peter Sprague and Louis Valenzuela have gigged there.] The other place we’ve been using is Grassroots Oasis, which is in Old Town out by Point Loma. We’ve probably done five or six shows there as well.”

Patton is committed to the idea and he hasn’t given up on a permanent site.

“These opportunities keep opening up. We’ve even got a show coming up at the end of September at the Japanese Friendship Garden in Balboa Park. I’m so glad I didn’t fold when we lost the first venue. Next year, there are some options in terms of a permanent space opening up that I can’t talk about just yet. Ultimately, I want LP’s Jazz Vibe to exist on its own.”