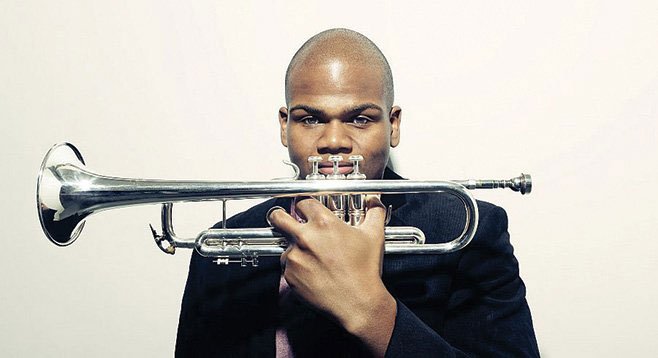 Curtis Taylor is a Grammy Award-winning trumpeter who relocated to San Diego from NYC/New Jersey in late 2013. Taylor visited San Diego in October 2013 to record the debut album of vocalist Mimi Klein, with UCSD professor Kamau Kenyatta, the same man who, as producer, brought him onboard for singer Gregory Porter’s Grammy-winning album Liquid Spirits.

“What brought me here is simple,” Taylor told the Reader. “Two words: Kamau Kenyatta. I came out here, man, this is the first time in Southern California, and my thoughts are really clear. A lot of people seem nicer out here, compared to the East Coast. There wasn’t so many people per square inch...I knew I had to get back as soon as possible. Since I’ve been here, some really great things have happened. I’m trying to plant here, or at least make this my base of operations. Ideally, I’m trying to travel and perform with any and everybody I can, as well as work on my own projects, but I specifically came here to team up with Kamau and focus on my own product to offer the music community.”

His album Snapshot, released in July 2019, was recorded live at the World Stage in L.A and features San Diego pianist Hugo Suarez alongside L.A. veterans Ben Shepherd on bass and Gene Coye on drums.