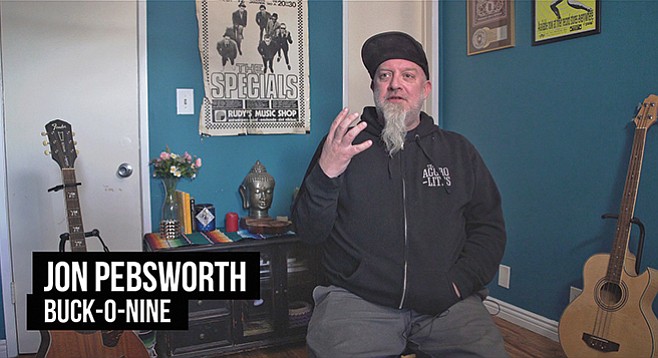 Documentary chronicles the “third-wave” of ska

Makers of the documentary Pick It Up! Ska In The 90s recently waged a quite successful Kickstarter campaign. The filmmakers set-out to crowdsource a rather modest $40,000 and (as of early August) have nearly tripled that goal with over $118,000 in funds.

The film chronicles what most have come to regard as the “third-wave” of ska. Bands that fall into this category include Reel Big Fish, Less Than Jake, No Doubt, Hepcat, and San Diego’s very own Buck-O-Nine. Lead singer Jon Pebsworth was interviewed for the film and appears in the trailer for the documentary.

After shuffling through a handful of musicians very early on, Buck-O-Nine’s core lineup was set by 1992. The band was notable from the start for being a melting pot for diverse musical influences. Founding bass player Scott Kennerly was a fan of the Dead Milkmen, while other band members gravitated towards either reggae or hardcore and skate punk. Perhaps due to this genetic makeup as a band, they found success within various scenes.

“It wasn’t just ska kids that liked us,” guitarist Jonas Kleiner explained. “It was surfers from South Mission, and skaters and kids from Tijuana. It just started growing and growing and it wasn’t just ska. We would play on punk rock bills. Back when Blink-182 was Blink, we would play on the same bills. The kids who loved Blink loved us and vice-versa. At the same time, there was a total ska scene here, and lots of history of ska music here in San Diego. We felt like we were a part of it, and also part of some other thing too.”

By 1996, ska had begun to take the airwaves by storm. No Doubt and the Mighty Mighty Bosstones had major success with radio singles as the movement once again caught fire. Buck-O-Nine rode the wave when they released Twenty-Eight Teeth in 1997.

“I won’t lie, it was incredible. It was huge. We were playing so much. At least 250 or 300 dates a year. That was the peak of our touring. The way it really impacted us was seeing more people in the audience, and more people buying our shirts. You notice more people showing up that weren’t there a time before. Then, all of a sudden, it’s way more people and they have your shirt and they’re singing songs,” Kleiner said.

By 1999, ska began to slip back into the underground, and the activity of Buck-O-Nine slowed down considerably. The band stopped touring full-time around 2001, but still averages, according to Kleiner, about 25 shows a year. They have a new album set for release in 2019 and will open for Goldfinger at House of Blues on August 31, for a bill that includes the Suicide Machines and Suburban Legends.

“The one thing about Buck-O-Nine is that we have a camaraderie,” said Kleiner. “The seven of us are incredibly close friends. So, to us, just the fact that we can continue and have our friendships evolve…we just never want to stop.”