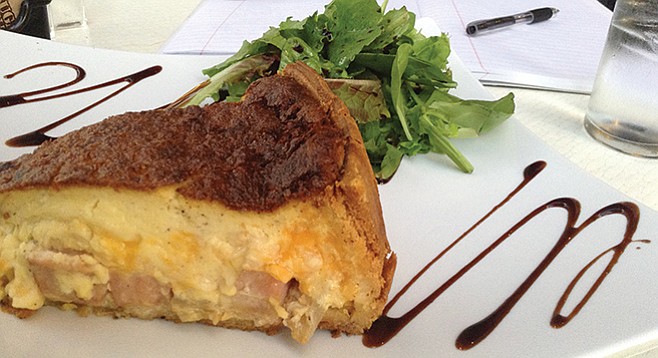 But she’s French. From Normandy, which should be named the Butter Capital of the World. They have black and red and white spotted cows there that deliver cream that makes butter you can only dream of. 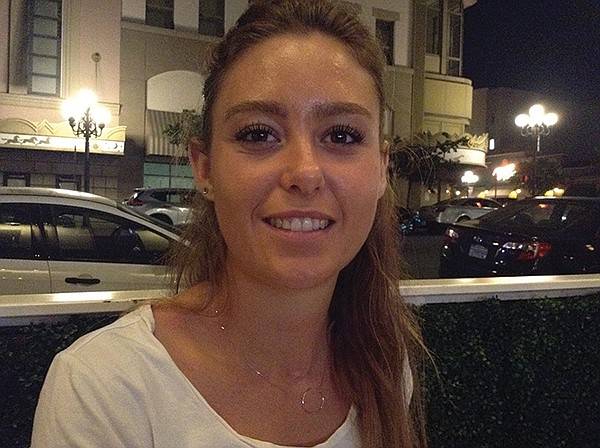 Agathe — from Normandy, which should be named the Butter Capital of the World.

And that’s what Agathe’s bosses do: import butter from Normandy to San Diego to make their croissants with. We’re talking Le Parfait Paris. They have a baking facility in Mission Valley and this café at Sixth and G. Carla got wind of this and ordered me off to round some up. 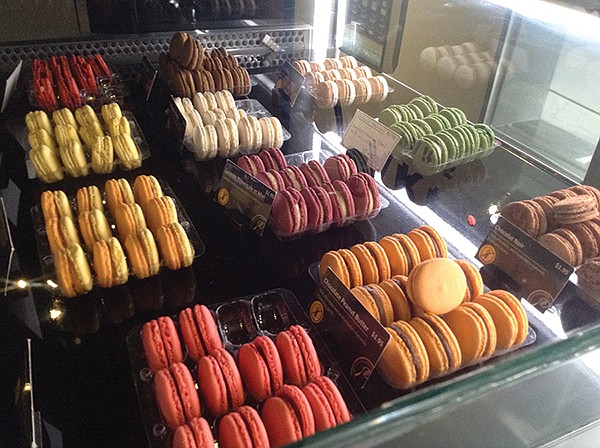 Macarons like “Provençale lavender and honey” and “chocolate peanut butter.”

When it comes to croissants, you don’t challenge Carla. She wants to taste the butter involved, see how flaky the pastry is, what chocolate’s best to stuff inside, on and on. And, okay, I love ’em, too. 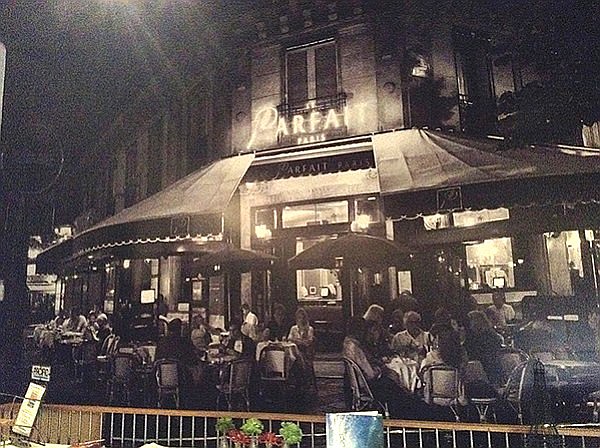 “That’s not really ‘Le Parfait. It’s some other Paris café. The owners photoshopped our name onto it.”

It’s in a new brick building almost kitty-corner to Buca di Beppo, the Italian place. You see the word “Parfait” above a six-table patio with a faux grass “hedge” all around it. 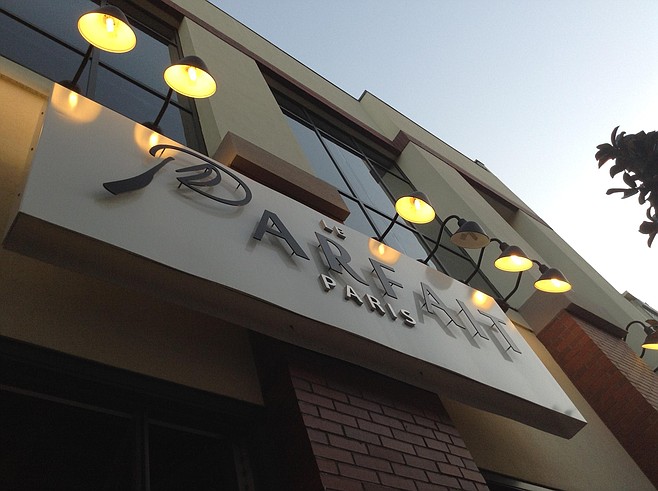 Sixth and G. They have a baking facility in Mission Valley.

Inside, first thing you notice is this wall-sized black-and-white photo of a Paris café with the same sign above: “Le Parfait Paris.” 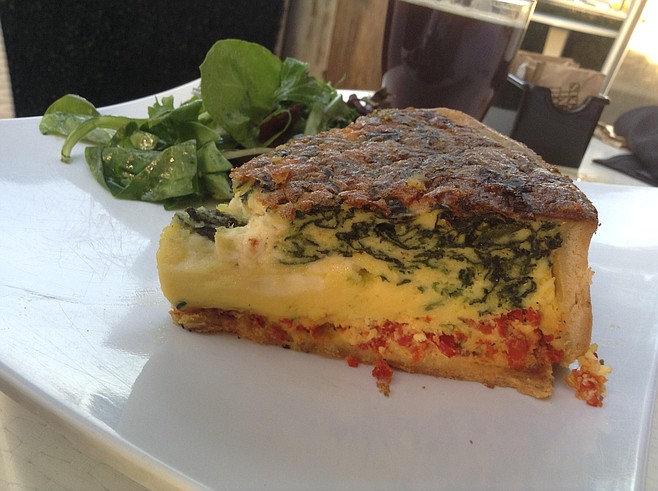 “That’s not really ‘Le Parfait,’” says Agathe. “It’s some other Paris café. The owners photoshopped our name onto it.” Whatever. It certainly sets the atmos up. They’ve got tables inside, but also comfy sofas with low tables where I guess you can sip a glass of wine and munch a macaron.

Because featuring heavily in the counter display are macarons of all colors and flavors, such as “Provençale lavender and honey” and “chocolate peanut butter.” Go for $1.95 each.

And I see the three cushions on the sofa are shaped and colored like giant macarons. Cool.

But now I’m reading a menu of savory dishes I could really get my teeth into, seeing I’m here, heh-heh. It’s quite a choice. Includes a croissant stuffed with scrambled eggs, cheese, and bacon called “L’Alsacien.” Costs $7.50. Or a Croque Monsieur with béchamel sauce, cheese, and “Paris ham,” plus organic greens on the side. It costs $13. Or $14 as a Croque Madame, meaning with a fried egg on top.

Benedicts go for between $13 and $15. A delish-looking Pain Perdu has berry sauce, honey, fresh fruit, and whipped cream and costs $12. (We call it “French toast.” French call it pain perdu — “lost bread” — because back in le jour, folks made it from stale bread, the bits that they’d normally throw away.)

So, reasonable, but not real cheap prices. Guess they have Gaslamp rent to pay. But hang on: that was the breakfast menu. Lunch has panini like Le Niçois, basically mozzarella, tomatoes, basil for $7; or with chicken, $8. Deal. And Le Corse sandwich sounds an interesting combo of salami, fig chutney, and gruyère cheese ($8).

I also see savory and sweet crêpes that are available all day, ranging from lemon crêpe ($6.50) to a Galette de la Mer ($11.50) with smoked salmon, lemon spread, cream, capers, and a poached egg. And, OMG: quiches. If Carla’s into croissants, I’ve always had this thing for quiches. Loved their squishy cheeziness. Here they’re $8.50. Cheap, compared with some of these other dishes.

They have a quiche aux Épinards — veggie quiche — with spinach, goat cheese, and sun-dried tomato; and the standby, quiche Lorraine, with caramelized onions, nutmeg, Canadian bacon, and mixed cheese. And you get organic green salad with each.

“They are so simple, and a staple for every mother or father to make,” says Agathe. Back in Normandy it was a regular thing for her to whip one up. “Just basically cheese, ham, eggs, onions, that was it.”

She says she came out here to study for an MBA in hospitality. Just finished last month. Started here as a barista, but now she’s through school, they’ve made her manager.

I get an Americano coffee — $3.50 for a midsize. Not cheap and no refills, but delicious. I take it outside. “No Woman, No Cry” is playing. Gal arrives with my quiche. Horizontal sun’s shining up G Street. Lights up the quiche, makes it shine golden with streaks of green and red flecking through it. And bursting out of the spinach, white, crumbly goat cheese. This is a major chunk of nosh. Not the inch-high babies you get at most delis. We’re talking three, four inches thick.

And it’s so easy to eat. Tender, lightly cheesy, but with that tang of goat cheese setting off the other tastes. But before I know it, it’s gone. Disappeared.

“Uh, Agathe, maybe one more quiche? The Lorraine this time?”

Longing for a glass of wine (about eight bucks, depending on the wine). Would so enhance this whole quiche-sidewalk-sunset thing going on here. Sigh. Working tonight again. I get a glass of water and sip away at the coffee.

Pretty soon, a giant wedge of quiche Lorraine’s sitting front of me, along with more salad, and a fresh couvert, as Agathe calls the black napkin and flatware. This baby’s a tougher mountain to conquer. It’s totally tender but it’s filled with really thick chunks of Canadian bacon. I plow on though. The sweetness of the caramelized onions helps, plus the nutmeg, and the beautiful solid, but not tough, pastry balances it all out nicely.

Oh, and the croissant? Carla allows me a minuscule nibble (they cost $2.80 each) when I get home. She’s practically rolling her eyes back in her head with pleasure.

“Normandy butter,” she murmurs. “Men are okay, but there’s nothing like the real thing.”