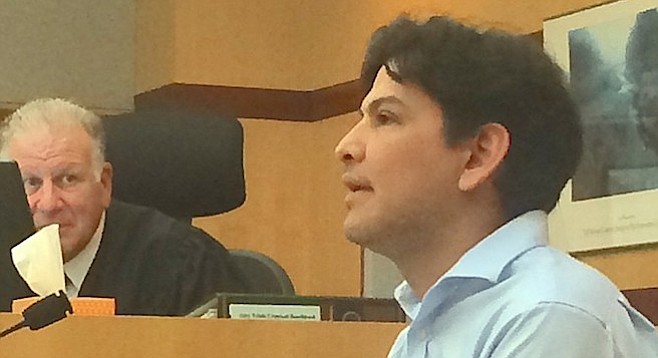 Blindsided by a lug wrench at the bus stop

"I bet you didn’t think I could sneak up on you like that, did you?”

Armando said he was seated on a bench, minding his own business the morning of February 22, 2017, when he was attacked. “I was waiting for the bus.” It was almost time for his regular ride to work, the 7:15 a.m. bus on Barnard Way near College Boulevard, when he noticed someone approaching, out of the corner of his eye.

“I was gonna move over,” Armando meant to make room for the other person. “Then all of a sudden I just saw blue.” Armando claimed that a strange woman struck him in the face with a large, blue, socket wrench. “A big metal one, for changing tires,” he told a judge in court on September 11. 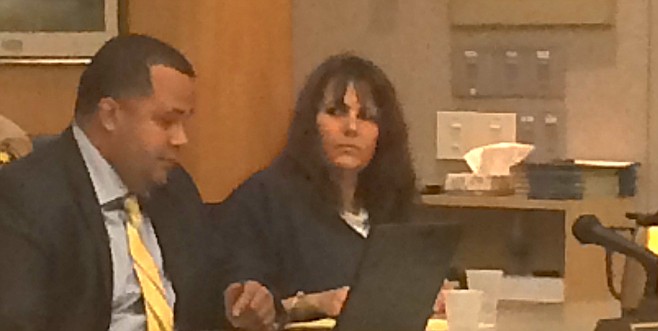 Immediately after he was struck, Armando said he heard the woman say, "I bet you didn’t think I could sneak up on you like that, did you?” And she cursed him.

Armando said he did not know the woman.

“I never seen her before in my life!” He was amazed and afraid. “She was talking to me as if she knew me!… So I ran to the middle of the street.” He was dialing 911 to avoid being hit again, and the woman continued ranting. “Everything else she was telling me was just gibberish!”

Armando said he got a deep gash on his left cheek, just below his eye, which required two stitches at the urgent-care center nearby, in Oceanside.

Suspect Sarah Marie Riley, 49, was booked into custody at 8:45 a.m. the same morning. Riley is described in sheriff’s records as 5 feet 3 inches tall, 135 pounds, a white female with brown hair and brown eyes. 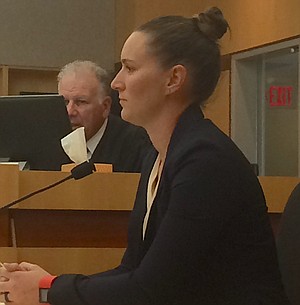 The following morning, at about 9:22 a.m., San Diego sheriff’s deputy Jessica Caporaso was monitoring the control room at the Vista jail when she noticed the women in Module Six “scattering and looking suspicious.” She immediately activated a lockdown for that area. When Caporaso and other deputies reviewed surveillance video, they saw one female detainee pick up a broom and strike another female over the head with it.

“It actually broke in half,” the deputy told the judge. Caporaso said that when deputies questioned the offender, Riley, “She said we needed to get sturdier brooms.”

Riley's attorney said she has a history of mental-health problems, and public records show that she has multiple mental-health cases since 1993, when she would have been 25. She also has had multiple civil and criminal cases over the years.

After a brief preliminary hearing, which lasted less than 20 minutes, judge Harry Elias ordered Riley to answer two felony counts of assault. She has pleaded not guilty to all charges, and her next court date is set for October 10 in San Diego’s North County Superior Courthouse in Vista.

2) Violent, crazy nuts need to be locked up, period. No matter how much liberals whine and cry, we have to either sweep the city clean of crazy transients and addicts, or we'll keep seeing more attacks, trash, filth, disease, etc.

Most homeless are bums. Most of the mentally ill are alcoholics or druggies. They, but for a few, are worthless human trash. Those that want help and want to be part of a productive society should receive the help they need. The rest are like stray dogs. The more you do for them the more of them you will get.

I stopped sitting on bus benches because several times I had homeless people startle me by rushing up to the back of the bus bench, I was waiting on, press close to the back of the bench and then take a piss. All you could see was the urine streaming towards the street. Modern times for transit riders.