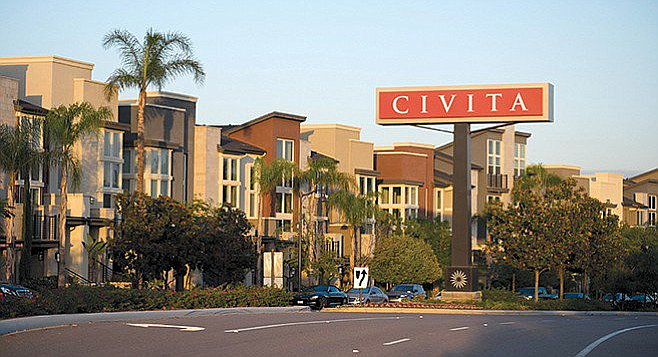 Bicyclists vs. Civita residents re road

About 35,000 vehicle trips could roll through Mission Valley development

Circulate San Diego, a local nonprofit whose mission is to remove people from cars and increase pedestrian and transit-oriented travel, is lobbying city officials to build a controversial freeway connector through the master-planned community of Civita north into Serra Mesa.

The group submitted a lobbyist disclosure to the City of San Diego on October 20 revealing their support for a "street connection between Phyllis Place in Serra Mesa and Franklin Ridge Road."

For years, as reported by the Reader, residents of Civita, a transit-oriented master-planned community near Highway 163 and Friars Road, have spent years lobbying against the road. They say they moved to Civita to get closer to transit and to live in a more sustainable, pedestrian-friendly community. They claim that the road, which is estimated to serve 35,000 vehicle trips per day, will destroy the community. In regards to bike and walking paths to Serra Mesa, residents say those will be there with or without a road connection.

In addition, residents of Civita and Serra Mesa say that even the project's environmental reports show that while the road connection will be a shorter distance to travel, traffic at the new on- and off-ramps to Interstate 805 will have significant delays.

Despite their efforts, the city and Civita developer Sudberry Development — a major donor to Circulate San Diego — are moving forward.

And, as seen in the recent lobbying efforts, bike-advocacy groups are also jumping onboard in support.

Cindy Moore, a resident of Civita, said she and another member of a Serra Mesa planning group subcommittee attempted to meet with Circulate San Diego to discuss the potential impacts but their requests were denied.

One month later, Moore learned that Rosas and Circulate San Diego had enough time to lobby city officials to get the road approved.

"The road connection creates a direct route to the I-805 freeway," says Moore of the group's lobbying efforts. "In advocating for the road connection Circulate San Diego is encouraging auto-dependency and is not promoting the use of transit and bicycling. A tremendous increase in traffic from the connection will increase the risk for pedestrians and bicyclists in both Serra Mesa and Civita."

As for Sudberry and other developers donating to Circulate San Diego, Parent says their support, as well as the support from others, is "because of our longstanding advocacy for smart growth and transportation choices. Our positions on policy matters are based on their merits and our organizational mission, which does not always align with the desires of our donors."

The city council will decide whether to amend the Serra Mesa Community Plan on Monday, October 30, which will give final approval for the road to be built.

Some opponents have expressed their willingness to seek legal action if the road connection is approved.

San Diego city councilmembers approved the road connection through Civita. District 1 representative Barbara Bry was the only one to oppose the road. It is unclear whether Civita residents will challenge the road in court.

"Our positions on policy matters are based on their merits and our organizational mission, which does not always align with the desires of our donors."

Thanks, Colin—I needed a good laugh.

But seriously, he can't name one instance where Circulate has acted against its developer donors. Because in fact, that's the only reason Circulate exists: to be their astroturf front group to counter actual grassroots opposition.

Colin Parent, a current La Mesa City Council member. I wonder if he if the genius behind the transformation going on in La Mesa on Spring Street? What a mess they have created to make a bike lane; eliminating two lanes of car traffic (to one), lowering the speed limit from 35 to 25, and making deadly head-on collisions more likely to happen.

I have always tried to avoid Spring Street because of its time-wasting, unsynchronized, schizophrenic traffic lights. Now I am avoiding the mess altogether and finding businesses in San Diego and Coronado to patronize.

As far as Civita goes, if this lobbying Trojan horse “Circulate San Diego” were legit, they would just support a bike trail from Serra Mesa into Civita.

Time to wake up SD and realize that Circulate is the 900 lb gorilla in the room. They won't stop until all cars are banished - all in the name of the climate plan - but really just to give their members lanes to ride in on the weekends.

"...while the road connection will be a shorter distance to travel, traffic at the new on-and-off-ramps to Interstate 805 will have significant delays..."

Do you know why? It's because our politicians turned 805 into a parking lot twice a day by allowing big-ass developments around Otay Mesa without planning for traffic.

Same as it ever was...and we keep electing people who don't have San Diegans' best interests as their top priority. So now, downtown has a reputation of being a center of fecal-born diseases, which will surely attract conventions to the center downtown.

Maybe we should hand out free plastic shoe protection to tourists, since our mayor and council tried to ignore the problem until it went from low profile to a full-on Hepatitis A epidemic.