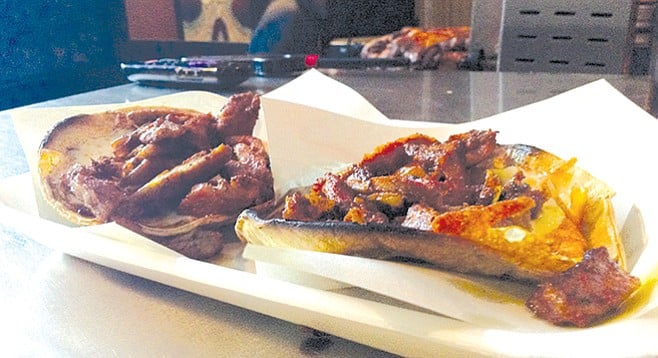 From Mexicali to Logan Heights to L.A.

Erk! Suddenly strikes me: Halloween’s around the corner. And seeing I’m here in Barrio Logan, my mind starts gravitating to vampire tacos. Tacos vampiros. Always wanted to try one. Never had one.

Only problem: the timing. It’s seven on a Sunday night. Streets are empty when I jump off the #11 bus at National and 30th. Big dogs hurl themselves against their metal gates in the dark. In the big silence after that, somebody starts practicing a trumpet a few blocks away. 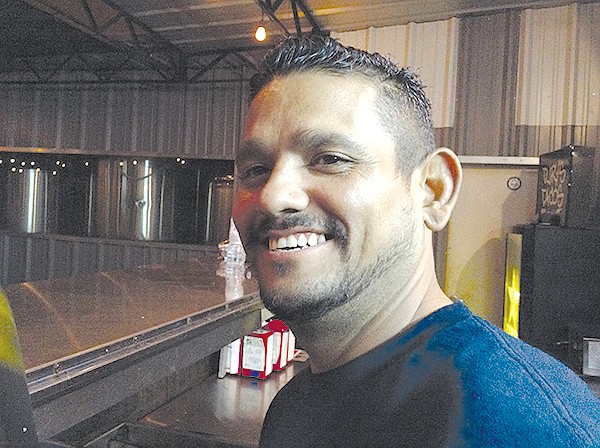 Tury: “Mexicali's where I grew up. I was cooking tacos at age five,”

Near Sampson Street, trumpeter’s close by. Ah. He’s lounging in an easy chair inside a little storefront. Sign above says “Mariachi La Barca.” Guy says their group charges $400 an hour. “We’re eight in the group,” he says.

Then I’m outside this warm saloon. It’s comfortably crowded, even now, on a Sunday night. Straightaway you’re looking at graffiti art with messages such as, “Who’s the illegal alien, Pilgrim?” and “Mayahuel, goddess of the maguey and brew, loves Border X!” 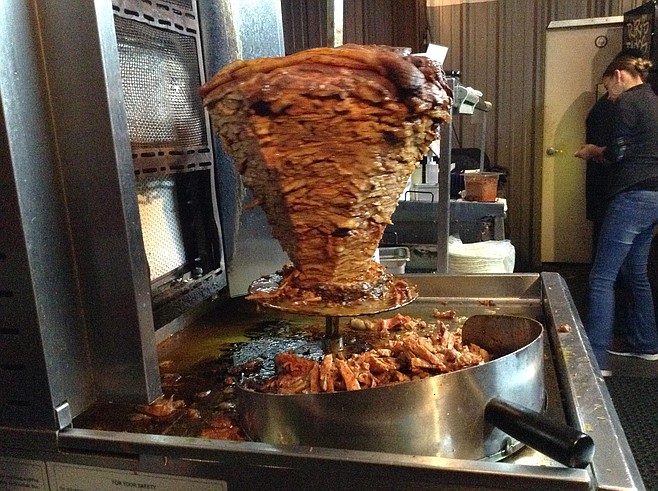 The trompo of pork al pastor. Hour and a half to make, six hours to sell out.

Oh, yeah. Border X. They brew beers right here in back, usually with a Mexican take. When I come in, they have beers on the board like Gran Jefe (for a wheat hefeweizen) and a Golden Stout with about 10 percent horchata, and Abuelita’s Chocolate Stout, with cinnamon and chocolate. 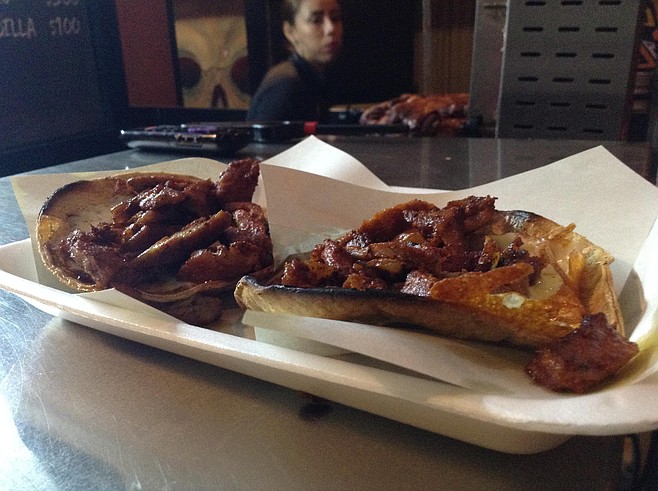 My vampiro before fixin's.

The bar guy recommends a mix of the chocolate Abuelita and the Horchata Golden Stout. Six bucks. Hmm... Yes. A big, generous cerveza. No sign of San Diego’s usual hoppiness. 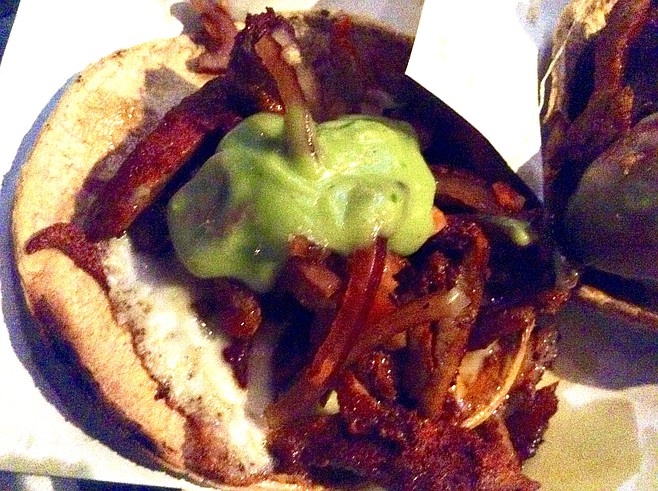 But I’m here for the spooky food. I follow a sign that reads “Beer Garden” and another that says “Tury’s Tacos.” And then I’m out in a totally different area, open to the night sky, with booths, strings of lights, plank tables, cornhole boards, bamboo walls with art on them, and some excellent graffiti involving the “X” name. Like, one says, “Borders Can’t X’ist.” 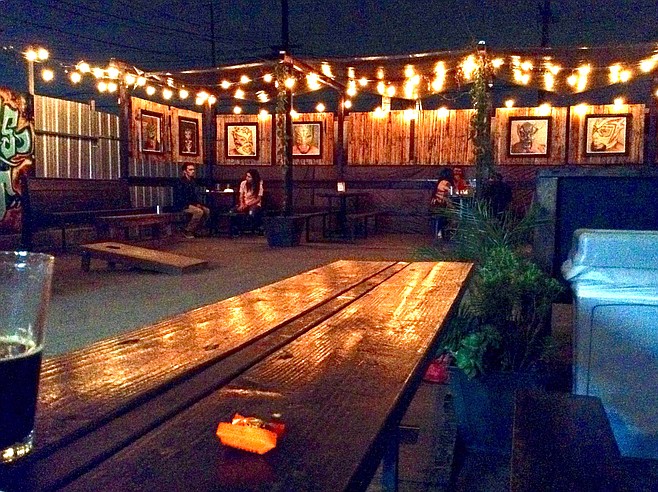 On my right, I feel the heat of a spit with al pastor pork glistening golden as it turns. The trompo, the vertical spit, is Lebanese immigrants’ great contribution to Mexican cuisine. And beyond, a couple of guys are slapping corn tortillas onto a plancha — griddle — hot plate, scooping up others, and plunking meat and cheese and other stuff on top.

But the best sight is a blackboard menu. All tacos are $2. Asada, pollo, pastor, vegetales, chorizo-and-asada, and chicharrón. A specials board has a ceviche tray for $6, and a reminder about their Taco Tuesday — 4 tacos for $5. Deal. 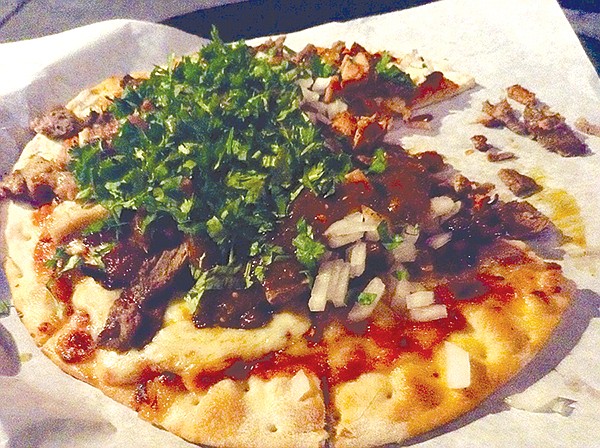 I order that. Then I’m thinking of a couple of others. Am ordering al pastor and chorizo tacos when this guy behind the counter starts piling meats onto a ten-inch pizza. And keeps on going. Man. This ain’t your average pepperoni-and-tomato-paste pie.

“It’s the meat lover’s,” Tury says. “Nickname for ‘Arturo,’” he says. He points to a card on the stainless-steel counter. It lists the Meat Lovers pizza at $9, a veggie one for $8, and a combination for $11.

So I order the meat lovers’. Couple of slices plus the vampire tostada should be enough. Then Carla and I can polish off the rest later. Sunday-night picnic.

Have to say, the pizza delivers. It’s packed with carne asada, chicken, and pork al pastor. One of the cooks, Uriel, helps me choose salsas to put on top. A hot, a habanero, cilantro, onions, and a kind of liquidy guac. It’s a tongue-prickling treat, and it’s a lot, and it’s a real deal.

But the best moment comes with the vampiro. For starters, watching Tury make it. The corn tortilla’s kinda baked on the plancha till it’s like a tostada. Then he takes stretchy Mexican cheese and grills one side till it’s crispy underneath, with the stretchy top still gooey under all the meats. Looks like the white of a fried egg. The heat comes with the hot-hot salsas they have.

Why call it vampiro? There are a thousand theories. Maybe it’s because the tortilla’s griddled till it’s dried and crunchy and looking like a batwing. Or like Dracula’s cape. Or, because they have lots of garlic, they scare away zombies?

Tury says vampiros come from Mexico City. Oh, yeah. Reminds me of the Volcán tostada I had at Villa Nueva bakery in Coronado. They’re Mexico City folks. Said the Volcán was a chilango thing. Except that one cost about five bucks, plus two more for the meat; seven, instead of three here.

Whatever, Volcán and vampiro are exactly the same tostadas.

But Tury says his food here’s Mexicali style. “That’s where I grew up. I was cooking tacos at age five,” he says. “It was a hard life there.” But he finally shifted to San Diego, got a job in a Hyatt here. He came in to Border X one night, didn’t think the food was right for a Mexican-style pub, spoke to the owner. “He started off giving me the kitchen Sundays,” he says. “Then Saturday and Sunday, then one day he said, ‘The kitchen is yours.’ Now he’s opening a second Border-X in L.A., and he wants me to open there with him. I said yes. My dad will look after here.”

Tury says he’s had two days off in three years. “There are no shortcuts,” he says. “Like, one of those trompos takes one and half hours to build, and before that we have to get the flavoring right.”

“You are everything, and everything is you.” It’s the Stylistics, singing as I leave. Across the road, Mexican dance music’s blasting out. People are dancing in a packed hall. Québradita, looks like. Mexican break dance. Oh, man. Need to bring Carla back here, share a couple of spooky vampiros, then go dance it off across the street. Maybe on Halloween — la noche de brujas.