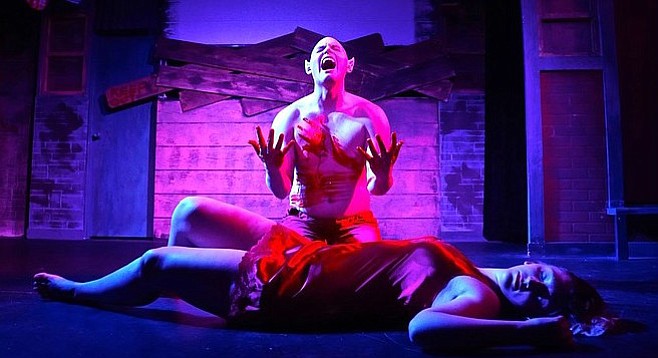 The ambiguous morality of the herd

Imagine Dracula meets Beauty and the Beast meets Frankenstein meets Footloose, and then add some music which has something of a Rocky Horror Picture Show vibe (but isn’t near the quality) and you’ve got Bat Boy.

The show was inspired by a tabloid headline regarding a half-boy half-bat found in a cave. One might be tempted to think that this a comedy, but it is deadly serious, especially as the bodies begin to pile up. That isn’t to say that the show isn’t funny, but the themes run in a grave direction.

The Bat Boy is discovered by the children of the Taylor family while they are exploring a cave outside the fictional town of Hope Falls (double entendre). The Bat Boy attacks but is captured and eventually ends up as a guest of the town veterinarian Dr. Parker. Dr. Parker’s daughter, Shelley, hates the Bat Boy but the wife of Dr. Parker, Meredith, has compassion for him and names him Edgar.

Cattle begin dying around town and the suspicions of the closed minded citizens are aroused. What would we do without closed minded townsfolk? The herd mentality, so expertly expressed by Nietzsche, is an unfortunate reality in our culture which by some metrics is picking up momentum.

Regarding the morality of the herd, Nietzsche observes, “It is not the ferocity of the beast of prey that requires a moral disguise but the herd animal with its profound mediocrity, timidity and boredom with itself.”

In other words, the morality of the aggressive elements in a society are not disguised. It is in the herd that moral ambiguity begins because of their “profound mediocrity, timidity, and boredom...."

That Edgar has learned how to read and write and has achieved his GED do not lend him any merit in the eyes of the town. On the other hand, the Parkers have all but adopted Edgar when things go wrong, so very, very, wrong.

The town is constantly judging Egar based on his bat-boy standing which makes him vulnerable to being scapegoated. It’s a theme which runs through several classic stories such as The Hunchback of Notre Dame. When people start turning up dead who are you going to look at first? Why the Bat Boy of course.

The timing of this production could not be more perfect, and it fits OB to a tee. Bat Boy runs at OB Playhouse through October 29.