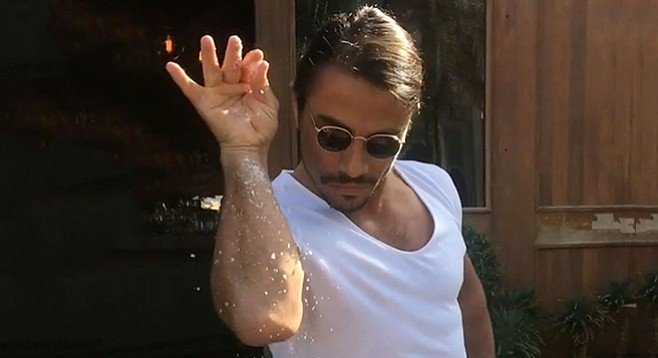 Salt Bae, the Eclipse, IT, Cuphead, the Mooch — look for them Halloween

2017 superstars — even if you hated them

Dear Hipster: What are your top selections for Halloween costumes this year? — Sandy

He captured our hearts, but not with his John Lennon glasses, or his borderline translucent shirt and high-waisted ’90s black jeans. No, in the end, his delicate salt-sprinkling technique, the likes of which the world has not since seen, catapulted Salt Bae to whatever passes for superstardom in this jaded world of ours. Of all the A.J. McClean (circa 1997) lookalikes to captivate the goldfish-like attention span of the average 2017er, Salt Bae undoubtedly reigns supreme.

Since last Halloween, humanity’s relationship with the natural world has taken a turn for the savage. High-profile natural disasters have ruined lives for people across the globe. Hurricanes pummeled the Gulf Coast and Caribbean nations with the unremitting force of 150 m.p.h. winds, and a series of earthquakes in Mexico dominated the news reels. Less publicized disasters in other countries have shown no mercy.

And yet, the natural world graced us with the wonder of the Great Eclipse of 2017, which delighted so few and frustrated so many who had the miserable luck to live beyond the path of the ecliptic.

I’m not sure how one dresses as an eclipse, all I know is that it must happen.

More appropriately, Pennywise the Clown. I predict a 20:1 ratio of crappy Pennywises to good, downright scary ones this year. Do yourselves a favor and, if you’re going to do it, do it right!

People generally talk about Cuphead from the standpoint of the game’s extraordinary difficulty, but that 1930s animation style has given the little platform shooter that could an undeniable visual appeal. There are sure to be some great, creative Cuphead costumes blasting their way through this year’s Halloween.

Mix two parts spray tan with one part fuhgeddaboutit, add a dash of pinkie ring, then bake in the crucible of public opinion for six days, et voila! Even if you hated him, you secretly want to be him for six hours this Halloween.