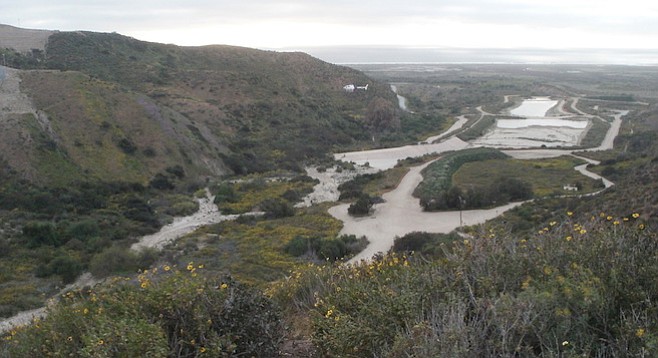 “Our goal is to divert solid waste and sewage from entering the river valley."

With the governor’s signature late Monday (October 9th), $2.1 million in state funding is on its way to the Tijuana River Valley — some of it earmarked to deal with the sewage, trash, and sediment that enters the U.S. along the border.

Senate Bill 507 allocates $500,000 to update the feasibility study for capturing, controlling, and treating the waste and water that currently enters the river valley from Mexico. State senator Ben Hueso and assemblyman Todd Gloria promised to seek the funding in May. 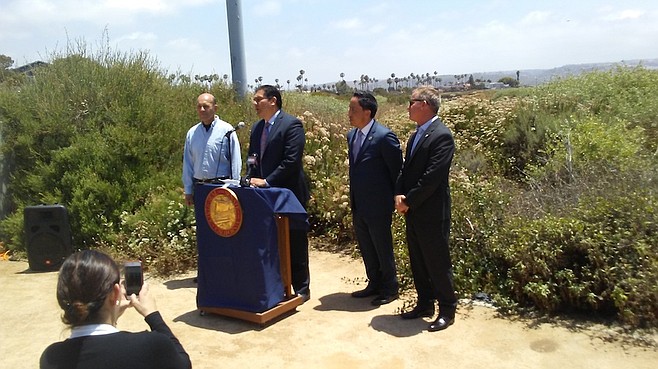 Local officials have been increasing the pressure on the federal agencies that have the authority — but lack the funding — to manage the longstanding problems. (The remainder of the money is slated for other county uses in the river valley. It was meant for acquiring property to expand the parks and open space, but the bill notes no land is available.)

The state Regional Water Quality Control Board is working with the International Boundary and Water Commission toward building earthen basins on the federal right-of-way where the Tijuana River enters the U.S., according to water-board executive director David Gibson.

“We are studying the use of earthen basins at the first point of interception for the sewage, trash, and sediment that enter the U.S.,” Gibson said. “Our goal is to do real things to divert solid waste and sewage from entering the river valley, its parks, and the [Tijuana River] estuarine reserve.”

The best response would come from Mexico in the form of a commitment to fund the major wastewater system improvements in Tijuana, but the infrastructure has not kept up with the city’s explosive growth. So, U.S. officials and the public want to proceed with projects on the U.S. side to at least control and reduce the damage caused by the sewage spills.

While there are regular, relatively small untreated sewage flows, especially after rainfall, a dump of sewage occurred in February, spilling an estimated 143 million gallons of raw sewage into the river — which flowed into the county and state parks river channels and remained there for weeks. The stench carried into Nestor and Imperial Beach before subsequent rains pushed the crap out to the ocean. Beaches in I.B., Coronado, and along the Silver Strand were closed for weeks because of the sewage contamination.

The massive flow was caused by Tijuana sewer-system workers working on a series of collapsed 48-inch pipes, according to a federal report. While the repair was underway, sewage was diverted directly to the concrete river channel. The U.S. side wasn’t notified, despite a series of agreements that federal water officials would be notified.

In 2012, the Tijuana River Valley Recovery Team (led by Gibson and members including a dozen local, state, and federal agencies) drafted the study and plan to be updated with the new allocation. The updated plan will bring the agencies closer to building earthen-bottomed basins much like those in Goat Canyon, Gibson said. At the same time, the water board is working on a proposal to help fund the capture basins, which Gibson estimates will cost between $8 million and $10 million.

“We are trying to get matching funds for the federal dollars needed to build the basins,” Gibson said. “If we provide a plan to design, build and operate them, we think that completion could be as soon as two and a half years away, where it would normally take a decade.”

In August, international agency commissioner Ed Drusina sent a letter to the mayors of Imperial Beach, Coronado, and Chula Vista as well as about 40 other officials that describes the agency’s plans and efforts to construct basins north of the border and east of Dairy Mart Road. The plan laid out in the letter is consistent with the recovery-team plan. The IBWC received no response from any of the elected officials it was sent to.

“We have been working with them for a very long time,” IBWC spokeswoman Sally Spener said Tuesday (October 10). “We have been very active in seeking viable solutions and we are trying to be responsive to the concerns and address them in a concrete way.”