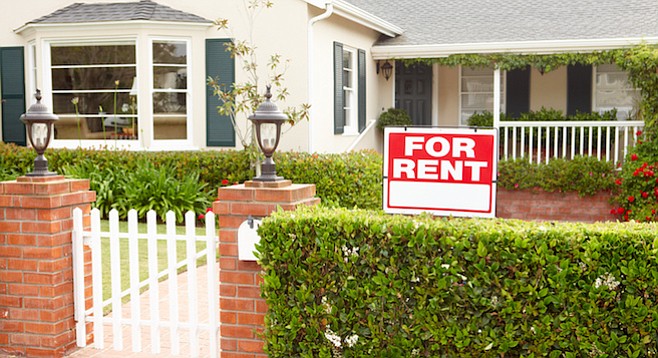 Of the 35 largest U.S. markets in this year's third quarter, residents of only three other markets — Los Angeles, Miami, and San Francisco — paid more than 40 percent.

During the third quarter, San Diego homeowners saw a slight rise in the percentage of incomes they shell out for mortgages — from 34.1 percent in 1985-2000 to 34.4 percent.

In the nation, the percentage spent on mortgages dropped from the 1985–2000 period — to 15.4 percent this year from 21 percent in the pre-bubble years. This was true in many markets such as Las Vegas, Philadelphia, Dallas, Phoenix, and San Jose.

They have everything you’d expect, including my latest fave taco, octopus
Next Article

The Guardian of Memory: brokenhearted at the border

Carlos Spector stacks the grain in a neat pile for the birds to fight over.

Of the 35 largest U.S. markets in this year's third quarter, residents of only three other markets — Los Angeles, Miami, and San Francisco — paid more than 40 percent.

During the third quarter, San Diego homeowners saw a slight rise in the percentage of incomes they shell out for mortgages — from 34.1 percent in 1985-2000 to 34.4 percent.

In the nation, the percentage spent on mortgages dropped from the 1985–2000 period — to 15.4 percent this year from 21 percent in the pre-bubble years. This was true in many markets such as Las Vegas, Philadelphia, Dallas, Phoenix, and San Jose.

Sushi plus Mexican equals vegan at The Village

The pinnacle of automotive coolness

I'm willing to bet that percentage of income spent on rent here is higher if one is talking about single occupant renters. That 40% number describes most of those I know who have roommates, so the situation is even worse than this indicates.

Cassander; Roommates can share in the cost. For years, San Diego has been harmed by the "doubling-up" phenomenon: more than one family will occupancy a home or apartment. Best, Don Bauder

Hi Don, and landlords/property mgmt. kind of companies, will often penalize a tenant to the nth degree for any new occupants who are seen living in the dwelling. A single tenant may rent a place for $1,500 a month, and once mgmt. discovers a roommate or extended visitor, often you can see another $500+ added on to the rent. I do not know if this is fair or not, I just know greed is embedded into the models.

Darren: I am not surprised by this. Landlords are afflicted by greed, too. Best, Don Bauder

I live in Coronado and own a property, where my mother lived in Lemon Grove. Now my mother is in assisted living and I am looking into renting out or selling that property. One thing I have noticed about Lemon Grove is the increasingly trashy looking appearance of the residences. I have no idea of the owner/rental ratio but I would suspect property ownership is very low. The streets are clogged with parked cars. On the streets and on the lawns. There are multiple families living in residences so there are in many cases 5 cars to a house.

I understand that I can probably collect $2500 a month or more for a 3BR 2BA 1200 square foot home. I might rent it but I feel it would be better to cut bait and sell so I don't have to collect rent from tenants. The community is in a major decline and the city has no path to improving the community. Crime is on the rise and the city has limited law enforcement resources. It is a recipe for disaster because as the crime rate rises and the revenues stagnate, the marketability of single family homes will decline. The Zillow website illustrates declining rent rates. There are also many families fleeing the community as real estate listings are at all time highs.

At what point is the rent worth the effort of living in a community where the future is more density, traffic and crime?

Ponzi: Lemon Grove has been in decline for a long time. Apparently, it is hitting bottom, or nearing it. Best, Don Bauder

Affordable housing is proving to be one the great challenges in recent. Not really certain what the answer. Govt incentives and zoning may ultimately have to the answer.

A ghetto is created by raising cost of housing to a point where it takes more than one family to afford the rent. In a declining area more and more people are required to pay the ever increasing rent. Like Ponzi indicated Lemon Grove is one of the areas that is in decline and the quality of life is impacted by more and more people moving into apartments and single family homes. All in all there are more declining neighborhoods in San Diego City/County than improving neighborhoods.

Lemon Grove is in decline because of demographics. When I grew up in Lemon Grove I walked to school. I walked to high school through a celery and pepper farm. There was a big nursery (Hunter’s Nursery) now reduced in size because of the I-125 freeway. We used to have a dairy (Miller Dairy) and could smell the cows in the summer.

We had a veterinarian a block away (Dr. Burns who became the mayor of Lemon Grove). We had dentists, doctors, lawyers, stock brokers and attorneys. Now we have a ghetto. A city where the traffic and parking laws are not enforced. It’s like the Wild West in Lemon Grove. You could literally drive through the city running red lights and running stops signs without any consequences.

With just two to three deputies on duty at any time, the law enforcement resources are consumed with the trolley troubles and various property crimes that are on the rise. The city of Ferguson Missouri has a similar population with 55 sworn officers. Lemon Grove is a ticking time-bomb.
The city incorporated in the late 1970’s by a clan of local proponents of independence from the county. They did not realize that the community was too small to grow into a tax creating entity that could be independent. Lemon Grove is not Del Mar. Now, the city gains its revenues by falsifying the sanitation district needs and transferring millions of dollars from sewer taxes to the bloated and mismanaged city government.

Lemon Grove has become Encanto North. Businesses are closing, storefronts are vacant and the community is becoming a food desert. That is what happens when the deputies have to visit Home Depot daily for petty theft. When the deputy resources are consumed with the crime at the two trolley stations (mobility for the homeless and gangs).

I predict the city will eventually have to consider being returned to the county or annexed by the City of San Diego. Both of which do not welcome that outcome. Why should they rescue a civic ship wreck? Jerry Jones, the longest serving city council person is behind most of the city’s troubles from his support or a myriad of bad decisions and kicking the can down the road. He covers for the sewer taxes that are now the highest in the county. When I asked Jerry Jones about active business development and incentives he gave me some vague answer that that was not the city’s business but a problem with the business community not considering investment in the city.. or something. Cont.

The major problem is that the city is a major suburb managed by transient city executives that use Lemon Grove as a springboard for seeking higher and more prestigious assignments elsewhere. Lemon Grove is ripe for “intern” type management. Yet our “city manager” earns more money that Lieutenant Governor Gavin Newsome. I could go on and on. But I am just baffled at how a city can be hostage to such poor leadership and management and the people continue to vote for these idiots. They have a street project that has gone on for 3 years and may not be completed for another 2 years. It’s a simple project that any other municipality with decent leadership would have demanded an on-time completion within budget. But not sleepy Lemon Grove. They built the Golden Gate Bridge in 4 years. Lemon Grove can’t even keep the streets clean yet make them driveable.

As the crime rises and the revenues decline, keep Lemon Grove in mind as one of the biggest follies in self-governance that California has ever witnessed.

AlexClarke:On the other hand, San Diegans moan that the median home price is $550,000. But the medians in Silicon Valley and San Francisco are more than $1 million. Maybe we have some latitude before becoming a slum, but you could be right that in the county, more neighborhoods are declining than improving. Best, Don Bauder

Thomas Weller: If you were both entertaining people separately, I would guess there could have been some confusion, and possibly embarrassment. Best, Don Bauder

Mike Murphy: I don't know if these data include cable and cell phone costs. My guess is neither. Best, Don Bauder