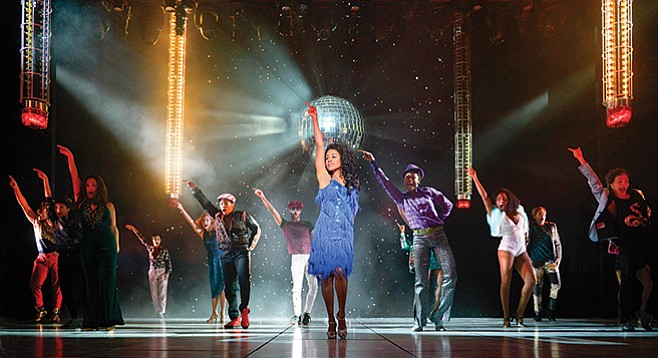 The most dazzling show ever staged at the La Jolla Playhouse

Summer — disco in a jiff

"Toot, ahhhhh, beep-beep... Toot-toot, ahhhhh, beep-beep.” People of a certain age will recognize Donna Summer’s “Bad Girls” from its first few notes. These may also conjure visions of glitter balls and strobe effects — timed to jack up the pulse — and claustrophobia-inducing Surround sound. But they might not know that the song’s about prostitution and that, in verse three, Summer includes herself: “Now you and me are both the same/ But you call yourself by different names./ Now your Mama won’t like it when she finds out/ Girl, is out tonight.” They may not remember because a full-bore synthesizer and a relentless beat, like a metronome with a bullhorn, often smothered the lyrics, and one of the finest voices of her era.

The La Jolla Playhouse’s Summer: The Donna Summer Musical, has a similar effect. This may be the most dazzling show ever staged at the playhouse (surpassing even Around the World in 80 Days and its wave after wave of knock-out technical wizardry). Summer literally turns the Mandell Weiss Theatre into a disco. The decibels max out just short of deafening. The lighting — as antsy as it is effective — is brighter than bright and often gunned at the audience. But the story, about an emotionally complex woman with at least 12 sides, is CD thin. Impressionist daubs — here this happened, there that — ultimately raise the question, “Of course, but who was she?”

Throughout, Summer says she’s “boxed in”; she’s more than just “the Queen of Disco.” She and her remarkable voice are emotionally extreme, impossible to cubby-hole, etc. Many popular music artists came to loathe the image that made them millions. Elvis Presley longed to do opera. Bob Dylan jumped genres with each new album. Summer wants to break through the fourth wall.

Scenic designer Robert Brill (UCSD grad and mainstay of Sledgehammer Theatre back when) may have taken his cue from Summer’s sense of confinement. The stage has an old-fashioned box set-structure: three tall walls with the fourth open to the audience. There are few, if any, corners. The floor’s a pale white checkerboard. A near-endless stream of squared projections slide down, adding key visual details. In effect, Brill turns the white box set into a hyperactive Rubik’s Cube. Props, furniture, actors, and dancers (doing Sergio Trujillo’s brilliantly kaleidoscopic choreography) materialize in a jiff. Every technical effect moves a consistently frenetic pace, as if to the beat of, say, “Hot Stuff.” You could almost say Brill has created the visual equivalent of disco.

I don’t know if it’s a first for world theatre, but it sure is for San Diego. Summer has a three-car chase scene. Headlights blink on in the darkness. It’s Summer driving with a lot on her mind. Then another pair trails behind her, swaying from side to side, either to pass or terrify Summer. Then two more headlights pop in. All move with a desperate urgency.

But then again, just about everything runs at top speed. And just about every song gets framed like a finale. Until late in the show, the audience has few chances for a time-out: to catch their breath and recoup for more pizzazz.

To account for her public and private lives, the musical has three Donna Summers: young “Duckling Donna” (Storm Lever); superstar “Disco Donna” (Ariana DeBose); and “Diva Donna” (LaChanze, the oldest, who looks back at her life while doing a concert. Each episode, she says, will be a “fragment.” And she will try to make them cohere. By calling them “fragments,” the script self-consciously acknowledges its many flaws and slender glimpses.

Each scene resembles a one-point speech: conflict with her “book-strict” father; touring with Hair; marriage, a child, and divorce; abuse; meteoric rise to “sex goddess” (thanks to the smash hit “Love to Love You Baby”); cancer scare; born-again Christian. Scenes make their one point with little (often cartoonish) development of character. The musical collects these “fragments” like merit — and demerit — badges. Summer had everything she dreamed of as a child, and everything else. As she shifts from saint to sinner and back, Summer keeps implying, “Be careful what you wish for.”

The clashing of extremes works in one instance. Summer may have been an early feminist, demanding equal rights and control of her art. And amid shirts unbuttoned to the navel, hot pants, and acres of bling, disco became a haven for marginalized gays, lesbians, Latinos, and African-Americans. Then, in an incident the musical glosses over, she made a demeaning remark about gays that went word-of-mouth viral and all but shot her down.

If fans of Donna Summer just go for the music, the rewards are many. In a big production number, Ariana DeBose (“Disco Donna”) struts and flat-out nails “Hot Stuff.” This comes late in the 1:45-minute show (it must be a comfort to know solid gold’s waiting in the wings). Young Storm Lever (“Duckling Donna”) belts influential songs, of several genres, from Summer’s childhood.

The musical has three numbers that halt — nay, stop — the pace: when Tony Award–winner LaChanze (“Diva Donna”) grabs the mike and sings “MacArthur Park,” “Hard for the Money” (“so hard for it, honey!”), and, with stark simplicity compared to everything else, when she’s alone onstage playing a piano and singing “Friends Unknown.” Remove all the bells and whistles and LaChanze is the heart and soul of Summer.

Des McAnuff, director emeritus of the La Jolla Playhouse and director of Summer, has often showcased popular musicians: Roger Miller’s Big River, Randy Newman’s Faust, The Who’s Tommy, and Jersey Boys among them. Compared to the others, Summer is more explosive and shy. The music pays a blaring-thumping tribute to the great artist. But along with being skimpy, the book feels tentative and holding certain truths back, especially when compared to her 1979 Penthouse interview where with courage and frank transparency, she reveals much, much more.

There is a car chase in the Broadway production of Groundhog Day. See: http://ew.com/theater/2017/04/17/groundhog-day-broadway-review/

I'm waiting to see "Bullitt--The Musical" hit a regional theater. ;-) Not sure how they could present that legendary Mustang car chase, though.