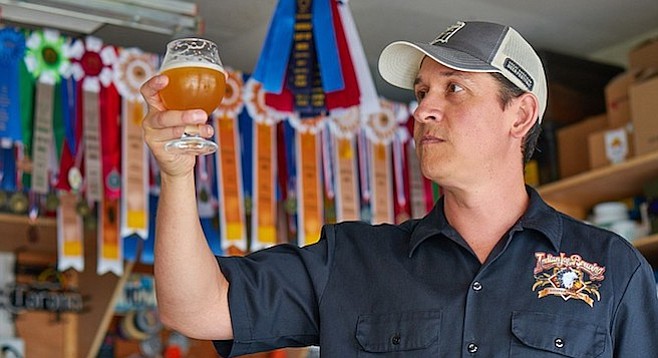 "It's not like I'm trying to trick the judges or anything," he laughs.

A local homebrewer has added another accolade to a growing list of them. On November 4th, San Marcos resident Nick Corona was named the Sierra Nevada California State Homebrewer of the Year.

An active homebrew competitor, San Diego beer fans may recall Corona was named national homebrewer of the year in 2016. However, he's missed out on the opportunity to earn the state achievement. "I found myself in second place the last couple years," says Corona, despite only competing in two out of the three contests. "I hadn't entered the third leg of it."

That would be the State Homebrew Competition, which takes place each fall in the San Francisco Bay Area. Corona says the logistics of getting beers to Northern California has prevented him from entering the contest those past two years. However, when he realized he was tied for first going into the final competition, he made the effort. "After the first couple of qualifiers I saw how well I was doing and decided to enter the third qualifier," he says.

Helping Corona's point total in the last competition were gold, bronze, and silver medal wins in the strong ale, IPA, and pale ale categories, respectively. As Corona points out, he entered the same beer in each category. "It's not like I'm trying to trick the judges or anything," he laughs, "but when I brewed it, I did brew it to fit all three styles."

Because each beer is judged pursuant to style guidelines, this beer (which he calls an IPA) tasted correct within the overlap of all three categories, each time blindly assessed against other beers in the category by a panel of certified judges. The same beer has been successful in numerous contests.

"It's actually the same recipe that I brewed recently at Green Flash, Corona points out. "We named it ‘Searching for Clarity.’” Also the winner of this summer's Treasure Chest Homebrew Competition, an IPA contest judged by Green Flash brewers and members of local beer media, Corona won two tickets to this year's Great American Beer Festival and the chance to brew and serve Searching for Clarity at the Green Flash brewery.

Corona is a member of the QUAFF homebrewers club, and like many award-winning QUAFF brewers ahead of him, he hopes to see his homebrew contest prowess translate to the successful launch of his own beer company. He's in good company, for sure. The last San Diegan to be named California homebrewer of the year, Paul Sangster, cofounded Rip Current Brewing the following year. And that went on to be named the Very Small Brewery of the Year at the 2015 GABF.