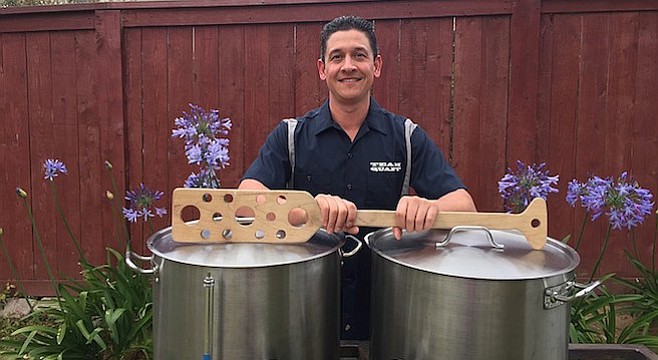 Professional brewers aren't the only ones who amass medals in San Diego. At the National Homebrew Competition held in Baltimore the second weekend of June, several local brewers came away winners. San Marcos resident Nick Corona earned the homebrewer of the year distinction, leading a group of six San Diegans to earn medals in 31 style categories.

Five of those winners belong to San Diego homebrewing club QUAFF, aka the Quality Ale and Fermentation Fraternity. This showing earned the club the coveted homebrew club award. QUAFF has not won this accolade since taking it five years in a row between 2002 and 2006.

According to current QUAFF president Dominic Fountain, QUAFF has more than 330 members countywide. He says that following its dominant run in the early 2000s, several members have been determined to return the club to prominence in national competition. Headed by members Travis Hammond and Doug Brown, the brewers rallied around a subgroup called Team Quaff.

"It's really through their efforts that they've rallied the best brewers in the club to showcase their beers at the national level," Fountain explains.

According to an unofficial history compiled by QUAFF president emeritus Greg Lorton, since 1997, QUAFF members have accumulated 103 medals at the national competition, 33 of them gold. Nick Corona, however, is the first to win homebrewer of the year.

Corona got the title when the hefeweizen he entered won gold in the German wheat & rye beer category, then bested all the other gold-medal-winning beers in a final round of judging to be named best in show — the contest's top beer overall.

The casino manager has been homebrewing since he first tried craft beer in 2012, drinking a Maharaja imperial IPA made by Boulder's Avery Brewing Co. "I fell in love with the taste," he says, "and I went from looking for 50-cent cans to looking for 10- to 15-dollar bottles of beer."

Corona joined QUAFF in 2013. He credits the club for building his confidence and helping refine his award-winning recipe, which has also won ribbons in local homebrewing contests.

"To win a national medal was one of my goals," Corona recalls. "To get a national medal really means you're competing with the best of the best across the country." Although he insists, "To win best in show was the furthest thing from my mind." Another of his goals is to go pro. "The finish line for me is to own and operate a brewery," he says.

It would definitely not be an unprecedented move. Too many QUAFF members to mention have found success in the brewing industry. AleSmith founder Skip Vergilio was an early member, as was current owner Peter Zien. So were Paul Sangster and Guy Shobe, founders of reigning very small brewery of the year Rip Current Brewing. QUAFF's most prolific medal winner, Jamil Zainasheff, won 25 medals before founding Heretic Brewing in Northern California. Six-time medalist Kelsey McNair hopes to open his long-anticipated North Park Beer Co. at the end of this month.

Curt Wittenberg of Encinitas won gold for Other American Ale