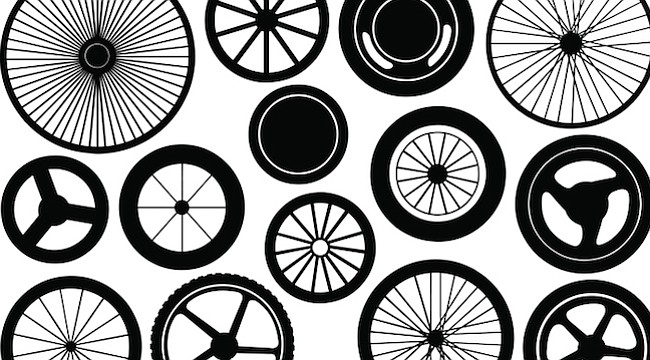 A cabbie’s life, treacherous bike riding, RVs are some people’s heaven, the trolley at night, big rigs near Rosecrans, why we drive freeways, a bus driver’s day, and this skateboarder knows San Diego

Did Somebody Call a Cab? 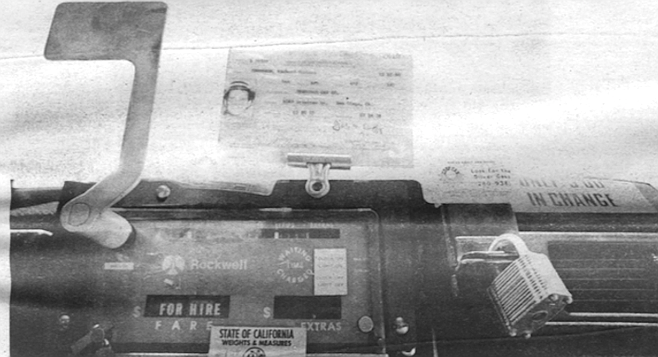 There was a strike. Yellow Cab drivers walked out in August, 1976, and by October they were crossing their own picket line. The strikers burned some Yellow Cabs, assaulted some drivers. Meanwhile, they organized their own taxi service and petitioned the city council to end Yellow Cab's monopoly of the business. The council then created the one-cab companies, each of which, in turn, created two jobs for drivers. The owners promised changes, some of which came true. 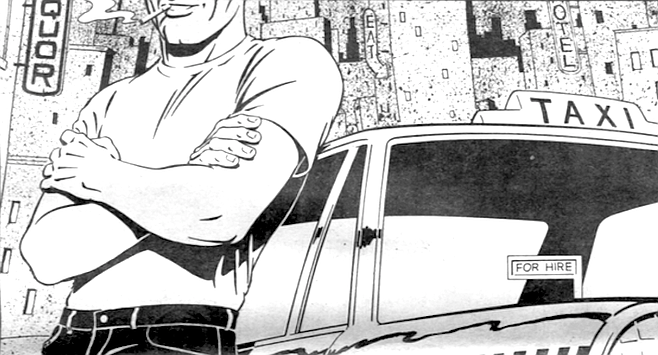 I finally came upon my taxi. It was beautiful, the most beautiful thing on four wheels I had ever seen! I climbed inside and kissed the wheel.

Around the Town in Seven Years

About halfway between Clairemont and Del Mar, the beer, bologna, and the two loaves of bread were weighing heavy on our stomachs. It was time for some music. Mexican, of course. We were right in the middle of “I Love El Rancho Grande,” the song blaring out of both sides of the cab, when up ahead on the right side of the freeway was the border patrol, with a car full of Mexicans pulled over. 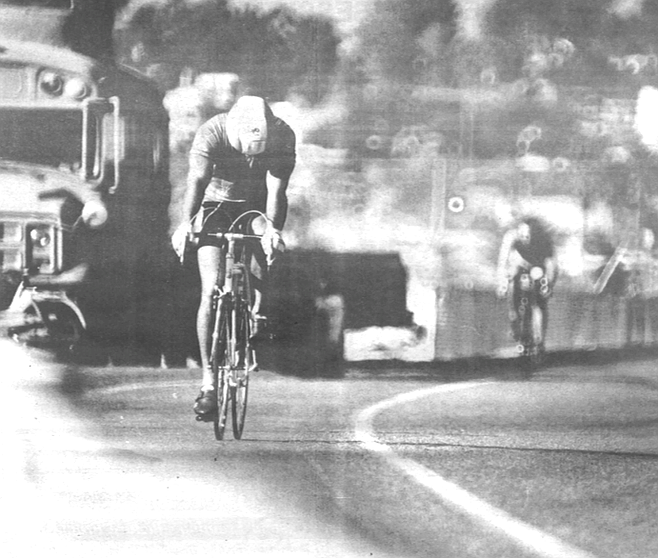 The Coast Highway bike route between Los Angeles and the Mexican border is the most heavily traveled cycling route in the United States.

In 1983 an active young triathlete was riding his bicycle from Poway to Mira Mesa. By auto, that trip is made on I-15, but bicycles are not allowed on the freeway. This cyclist was descending a hill on a frontage road, going about twenty-five miles per hour, preparing to turn. At the same time, a moped, going about thirty-five miles per hour, was coming up the bike path, preparing to turn onto the frontage road. 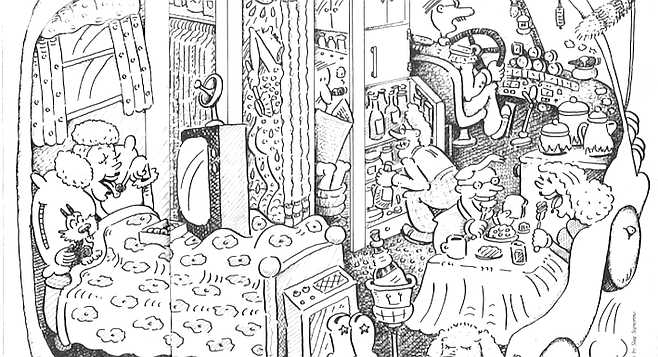 The Classic made every other RV look like a movable slum. It had real oak cabinets and parquet floors, leather power-adjustable chairs, a VCR and TV both fore and aft.

Like most people, I'd spent my time on the road stuck behind some land whale creeping along at twenty miles per hour up a forty-mile hill. I’d tried falling asleep in campgrounds listening to the drone of an RV generator while its owner watched re-runs of Gilligan's Island on TV and mixed strawberry daiquiris in the blender. And I’d seen and smelled the road turnouts where RV’s stopped to dump their waste water tanks. 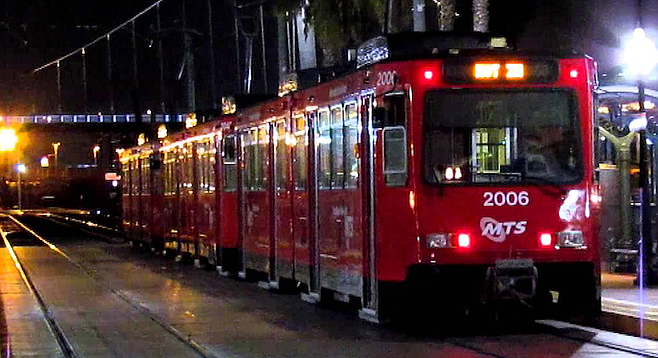 The security guard slipped out his can of mace, but in the struggle he sprayed his partner’s face, the whole rear of the car, and at last his opponent.

At the Palm City station, a female ticket inspector and a male security guard swing aboard. They work the aisle with a cadence and rhythm like a kind of dance. When they reach the end of the train where I sit, I recognize them from the fight earlier. “I could tell he was gonna rabbit,” the ticket inspector says of the man she and her partner fought. “He rabbited earlier, and I could see it coming again." 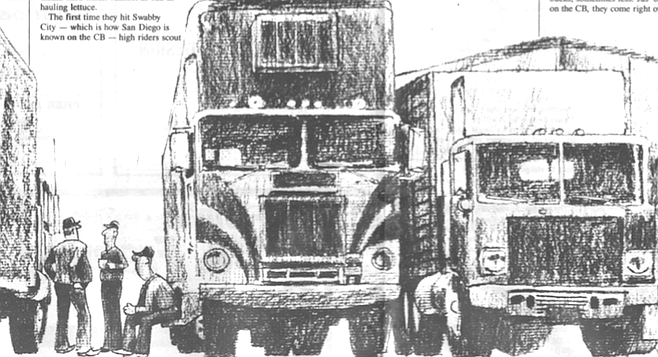 Carriers are charging 1980 rates and paying 1987 operating expenses, and for many drivers, the ride is over. At Perry’s Cate, truckers say the big money is going to the shippers and brokers. “There’s a long waiting line for the good driving jobs, and you gotta know someone. You gotta have connections. You gotta pay the brokers under the table. It’s easier to starve at home. Every day I sit in this lot, it costs me money.” 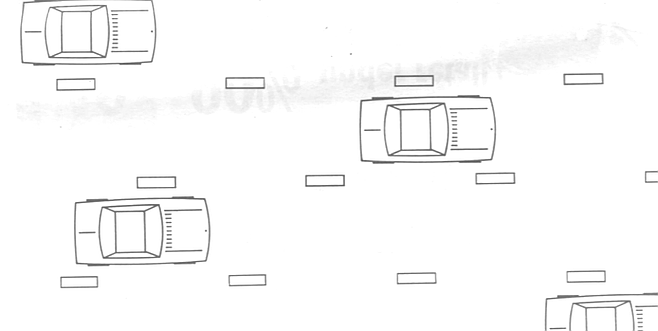 Traffic on San Diego's freeways has increased by more than 50 percent since 1980.

"Sometimes when you see traffic is jammed up, you can't see an accident, but you know something has to be there. You look for maybe the lanes moving unevenly, which would show that there is some debris in the lane." Kym takes another quick look through her binoculars and scrawls a note. “Here we can see a CHP vehicle making a traffic stop.... That’s westbound 8, east of 15. And it’s not causing any problem." 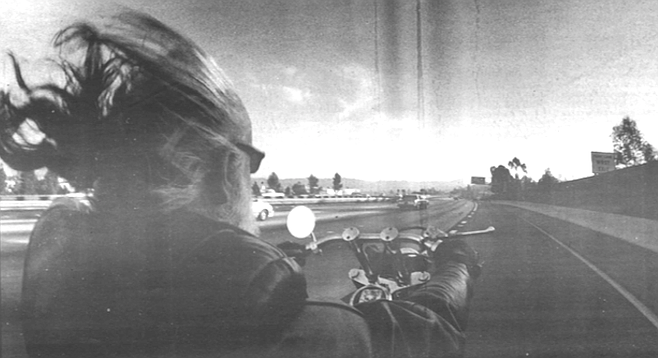 I climbed on Bubba’s scooter. First thing I did was tangle my foot in the “chicken” or “sissy” bar.

Where the Bikes Are

I noticed one guy playing pool using a broom as a cue. He looked as if he might have been an extra in a movie with a title like Chainsaw Rapists on Wheels, but then so did almost everyone else in there. He gave me a cool look and turned back to his game. There were more biceps and steely glances than I felt happy about, and I wondered if my voice would crack as I ordered a beer. 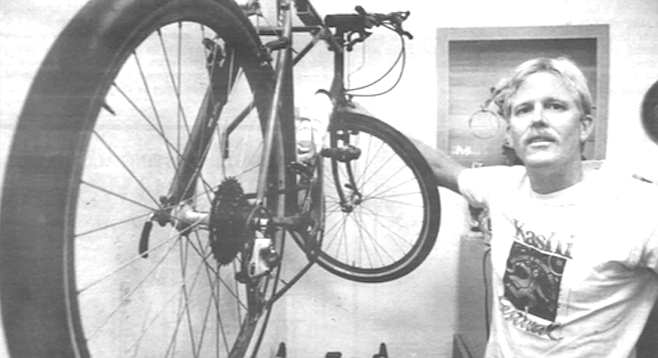 In spite of these gory occurrences Dan Gindling maintains that San Diego is a safe place to ride.

Rebels without an Engine

"Most accidents are kind of freak accidents; very few of them are preventable, from my standpoint, unless you don't go cycling. Some accidents happen when somebody is standing there and another person runs into 'em. You know, they're standing on their bike and a skateboarder crashes into ’em. I've seen all of that stuff. If you ride long enough — just like with a motorcycle - you probably have 100 percent odds of having an injury."

Summer of the Airborne Poodle

Like thousands of other San Diegan youths in the early 1970s, I became addicted to skateboarding. With money earned from my paper route, I purchased a set of Chicago Trucks and Cadillac Wheels, which I promptly bolted onto a crudely shaped, homemade mahogany board. This was my primary mode of transportation, and I spent many afternoons cruising around the streets of Coronado with my friends in search of the ultimate terrain. 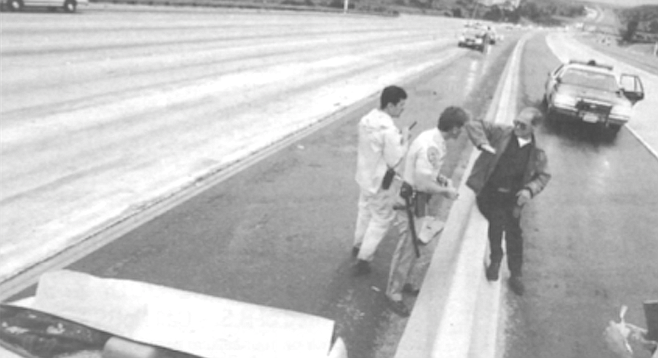 Crash victims. The trunk crusher I saw on 163, near the Balboa Park bridge, was actually two crashes.

The Unnatural Ecology of a Freeway

The decision to build 15 through from Riverside was made back in 1965, a logical extension from one military enclave to another. Larson argues that the root of the interstate highway system can be traced to General Pershing and his fears that we couldn’t move our troops around the country efficiently enough. “[T]here was a mistake, or an oversight, on some of the early legislation, and instead of ending on the I-5, the damn thing ended on I-8.” 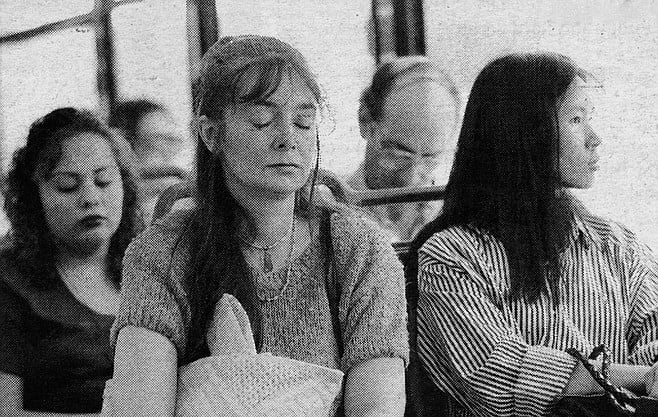 The 901. Driver’s yelling, “San Diego—Coronado Bridge! Last chance for anybody wanting to jump off! We have a two-second stop at the top.”

“Oh, sure, at the beginning of the month a lot of the homeless are drunk. We’re twice as crowded. There are more Number 7s running than any other route. By far. One every six or seven minutes. We have everything here. Tourists going up to the zoo. Schools. City College, San Diego High School, Roosevelt Junior High, and Helix High School. Plus we pass the Blind Center, so we have many blind folks using us.” 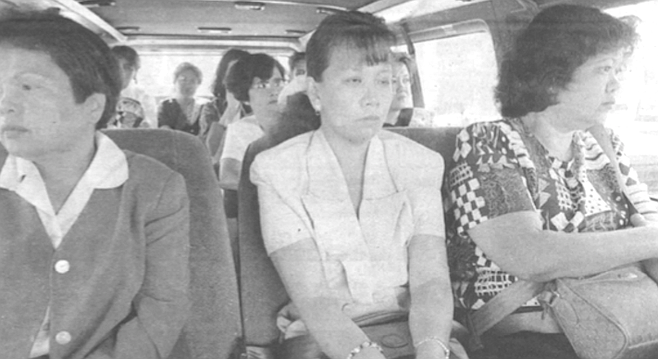 A 15-seater may run $1300 a month, but SANDAG subsidizes the costs, and Dorina tells me that her own share comes to $38 a month for everything.

The Freeway Is Nobody’s Home

If someone tries out a new recipe, she’ll bring extra along for the pool to sample. They trade videos, books, recipes, advice. It’s not uncommon for riders to lament their family difficulties on the morning run or vent about work in the evening, and Dorinna makes it clear that the group applies its collective wisdom. When Helen’s mother was dying of cancer, several riders decided to say rosaries for her on the commute for a few days.

I switched from driving a car to riding a bike few years ago, it feels great protecting the home of local plants and animals of San Diego. I would encourage everyone to consider it :)