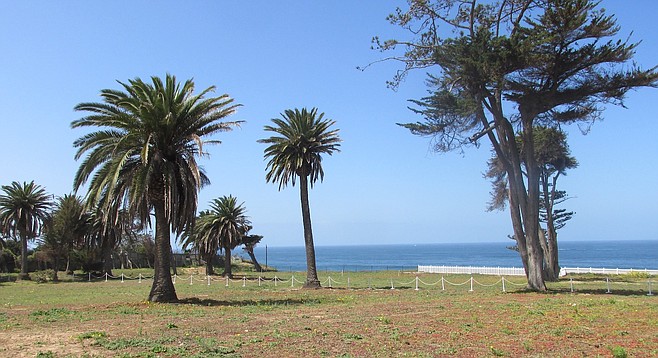 Public allowed behind locked gates to vote on design for housing, landscaping

For the first time in almost 100 years, the public recently got a look at 16 acres of coastal bluff top, probably the largest piece of undeveloped beachfront property in private ownership in San Diego County. 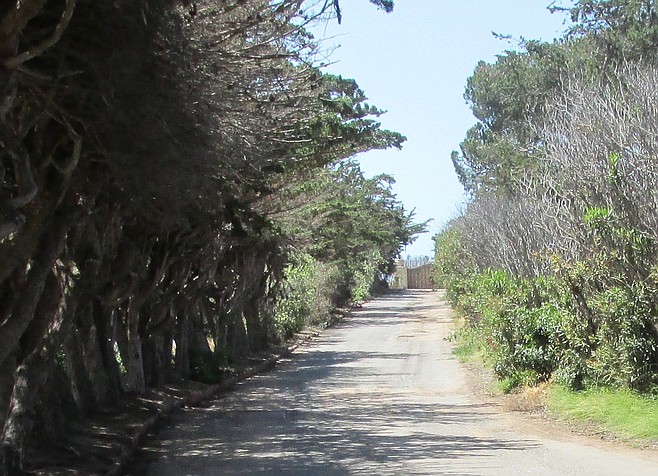 Driveway and security gate. Some of the California Coastal pines trees and palms may be moved.

Two of the three bluff top parcels above Del Mar’s Dog Beach along Coast Highway 101, have sat for decades, hidden behind high, vine-covered fences with large security gates. Separate families privately owned each of the parcels. The visit reminded me of Tom Selleck’s TV show, Magnum P.I., and the Master Robin Estate he lived on in Hawaii. 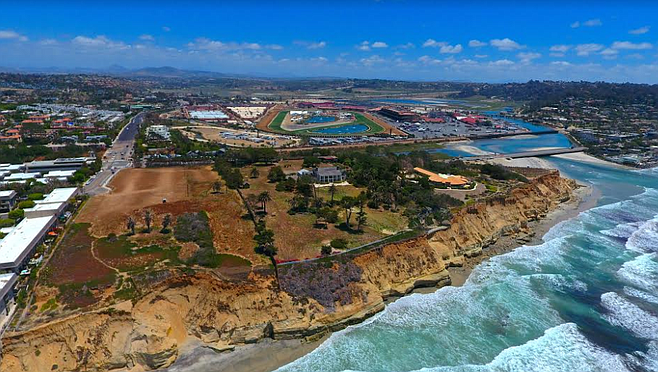 At the height of the real estate market ten years ago, the property was listed for $78 million.

Over two weekends in May, hundreds of residents visited the property. The developers, The Robert Green Company, partnering with Encinitas-based developer Zephyr, asked the public what they’d like to see on the property.

“We haven’t done any design work,” said Robert Green. “We want to understand what the community wants.” The public visited several displays, and could vote on their preferences in housing design, landscaping, beach access, and public amenities.

We’re still about three to five years out,” said Green. The project working title is “Del Mar Beach Resort.” Several folks I talked with were positive on the potential for the project, this from a community that usually pits developers against residents. Most like myself, were just excited to see what was behind those fences and gates.

The once well-manicured middle parcel held the Tibbot Family’s estate home and barn, which were built in the 1920s, according to co-developer Green. When the last Tibbot owner passed away in the 1990s, the land was donated to Scripps Memorial Hospital. Eventually a fire destroyed the large vacant home.

At the height of the real estate market ten years ago, the property was listed for $78 million. In the realtor’s aerial photo, a large hole in the roof could be seen in the home.

While the home and out buildings of the middle estate have since been demolished, the property contains mature California Coastal pines trees and palms. Matt MacLeod of Solana Beach’s Burton Landscape Architecture, said they hope to keep most of the large trees. “We may have to move some of them,” he said.

The southernmost parcel, which contains a large two-story modern home, is currently occupied. The 90-year-old owner finally decided to sell after decades of refusals. There is also a four-acre parcel directly above Dog Beach, of the southwesternmost point of the bluff, which is the Scripps Preserve. It is not part of the project and will be left untouched.

The large vacant northernmost parcel, bordering Via De La Valle, was featured in the October 25, 2007 issue of the Reader as one of the last 16 undeveloped beachfront properties in San Diego County.

So how did Green and his partners score the rights to these three-of-a-kind parcels? The owners had previously rejected realtor offers from around the world, worth millions of dollars. “We’re local, we worked hard, and we had the right timing,” said Green.

The project tentatively will include a luxury hotel and about 100 small, individually owned units. “No time shares,” said Green.