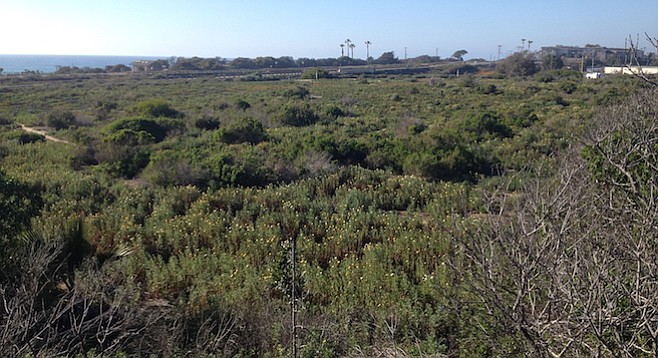 Proposed adjacent development is one more piece of "vision plan"

The small coastal hamlet of Ponto in the area of South Carlsbad may be in its final days. A large townhome project, known as Ponto Beachfront East and Ponto Beachfront West, is slated for 11.3 acres of the ocean-view property on both sides of Ponto Road, bordering Avenida Encinas and Carlsbad Boulevard (Coast Highway).

The project calls for 149 townhomes, of which 73 will be rentals. Most will be four-bedroom, three-bath units. Along the Coast Highway, across from South Carlsbad State Campground, 13,000 square feet of visitor-serving commercial space is planned. According to the city’s general plan, the center should be focused on small restaurants, ocean-view dining, and pedestrian-friendly areas.

As of May 13, according to Gina Ruiz of the city’s planning department, the project has stalled temporarily.

“It’s in the developer’s court now,” she said. “There has not been a hearing. The submitted package is incomplete because there are issues of concern, and possibly some environmental reviews needed.”

The project was proposed in April of 2015 by an Irvine-based company, Shopoff Reality Investments, for the property's owners, a Dallas investment firm, according to the development package submitted to the city.

When the Hilton Carlsbad Oceanfront Resort (now known as Cape Rey) was in development, there was some movement to get rid of the ten aged homes and businesses currently in Ponto, as reported in 2011.

The homes and businesses remain on Ponto Drive, near the proposed development. There has been no indication that the city has changed its position of wanting the enclave gone, as its continued existence prevents full implementation of the South Carlsbad Vision Plan: new ocean- and lagoon-view properties, hotels, restaurants, condos, and visitor-serving commercial.

The death of Ponto started in the late 1970s, when the City of Carlsbad annexed coastal property from Palomar Airport Road south to Batiquitos Lagoon (La Costa Avenue). Into the 1980s, Ponto was occupied by hundreds of acres of flower and tomato fields, clearly visible to I-5 motorists.