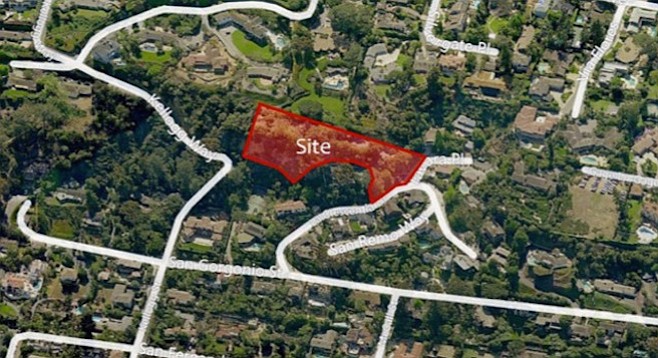 A state appellate court found that San Diego city councilmembers were within their right to rescind approval of a Point Loma development due to environmental concerns.

At issue is the development of Point Loma Summit, a proposal from landowner Carolyn Kutzke to subdivide two large parcels on La Crescentia Drive, formerly known as the Jessop Property, into four lots. Large single family homes would be built on each lot, ranging in size from 2600 to 3880 square feet.

In 2014, despite vehement opposition from a resident's group calling themselves Preserve Point Loma, city planners approved the project. In June of that year San Diego's planning commission followed suit by recommending that council give final approval.

But opposition remained steadfast. By February 2015 more than 900 residents signed a petition requesting that council not grant final approval. Their work paid off and later than month the majority of city councilmembers voted against the project, finding that the project's environmental documents inadequate and did not analyze potential impacts to public safety and other areas. In addition, they concluded the project was inconsistent with local planning doctrine.

Kutzke responded by filing an inverse condemnation suit against the city in April 2015.

On May 23 the appellate court found the city council did not overstep its bounds by denying the project.

Reads the May 23 ruling, "Although [Kutzke] asserts the evidence submitted against the project is markedly less persuasive than the evidence submitted in favor of the project, weighing conflicting evidence is within the city's purview and the city disagreed. Since the owners have not established no reasonable municipality could have reached the same decision as the city, we must uphold the city's decision."

Appellate judges ordered Superior Court judge to enter a new judgement, one in favor of the city.

Shame it took going to the appellate level, but glad that community consensus finally prevailed over pro-developer pressure.

If the appeals are over, then that settles it. But can't she ask for a re-hearing, or go to the state supreme court, or even the federal court? If she can, this could drag on for years.