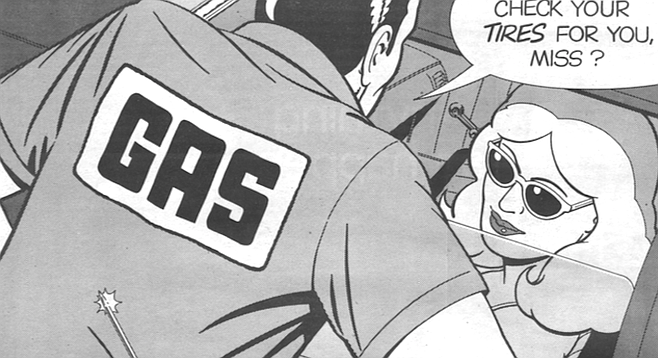 Famous cars of San Diego and their owners

Pop the Hood and Open Your Wallet

Drive in at midday. See the gas attendants, red rags dangling limply from their grease-stained back pockets, leaning against pumps, waiting. But after a Padres or Chargers game and during rush hour, they lift hoods, checking motorists’ oil, twisting off steaming radiator caps. Look around some more. A woman dressed in a beige suit and holding a briefcase has come to pick up her Datsun B210, and she’s looking at her bill, grinding her molars. 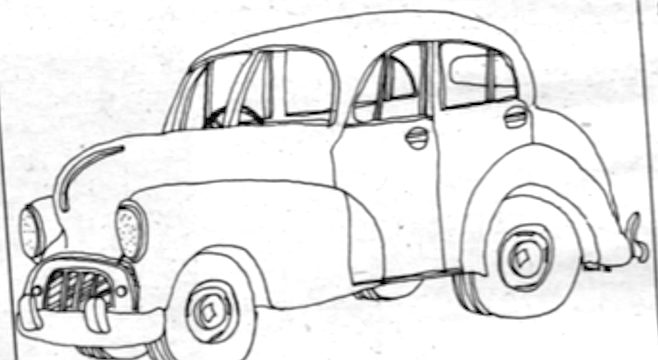 I ignored the suggestion that we give him a Viking funeral in Mission Bay.

After a year of Morris Minor ownership, I knew most of the stationary Morrises in greater San Diego and North County — people keep them in their back yard for the day they are going to fix them up completely. The moving Morris Minors are no problem to find. Every time two pass each other, they honk, wave, or even pull to the side of the road to discuss hubcaps, convertible tops, or electric fuel pumps. 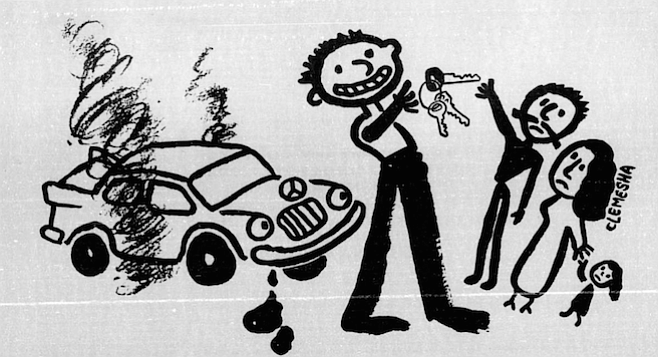 Big, burly man appears. He's an operating engineer, works at the dump, East County, has that pleasant dump look - blue shirt, greased-back hair, oil under his fingernails. Benz doesn't start, he jumps, we drive down to India Street then right and up the considerable hill on Washington. The car is stuck in first gear, engine winds, can feel the oil pressure squeeze-squeeze-squeeze, can feel the pressure on the bearings push-push-push, the hood vibrates viciously. 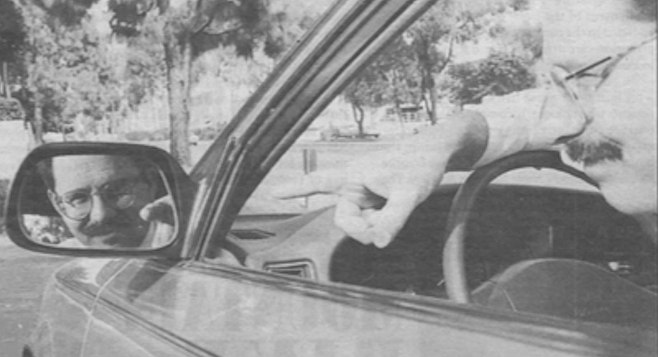 Pat Madrid: "I was falling asleep as I was driving home. I wound up driving down an off ramp of the freeway."

“When I got down to the University of Arizona, in order to make the payments, I had to hold down two jobs. I loaned the car to my roommate. I said, ‘Oh yeah, sure, you can borrow my car, you’re just going to drive around town, right?’ He goes to Guaymas, Mexico, and hits a cow head-on. Jesus, he crashed it. We fixed it up, but it was never the same as driving it off the showroom floor.” 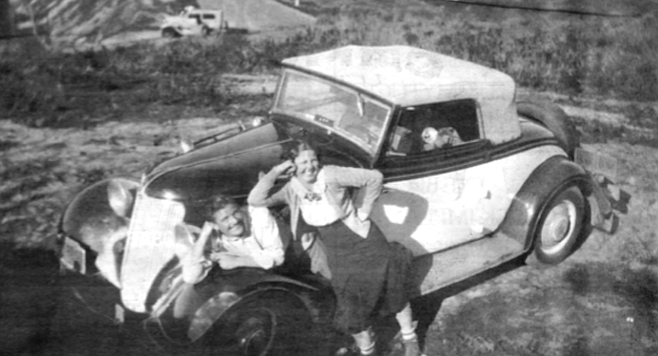 1930s roadster. While engines and the techniques to extract horsepower were easily available even by modern standards, the rest of the car was a small step removed from the horse-and-buggy era.

“We’d have four or five of those races, then we’d all form up and drive up Midway, cross the causeway and over the bridges, up through Crown Point and back down through Mission Beach, cross the old bridge from Mission Beach to Ocean Beach, come back up West Point Loma Boulevard, and head back down the causeway. A couple of the guys would choose up, and off they’d go, racing each other down to Midway.” 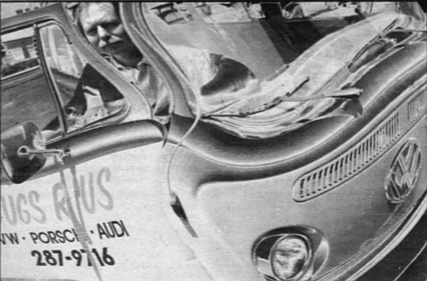 Jack Seuferer: "A lot of high school kids like the old body style."

Do you ever get called…

“I love the side doors. In a ’65 they swing open. I do carpentry work. The newer models have rolling doors, the suspension is a little better, but they have those doors. The amount of effort required to open and close a sliding door; there’s no comparison. I go in and out of the bus so much during the course of the day that my arms would be worn out with sliding doors.” 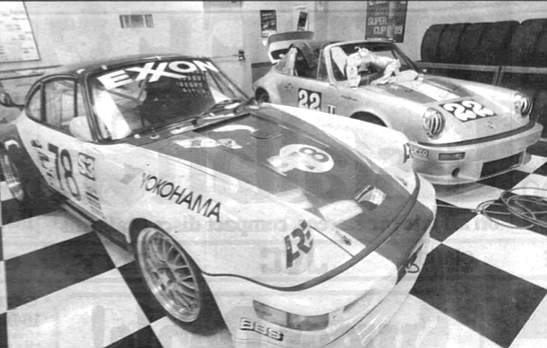 “The guy with the blue car out there, he was a world champion surfer. Drove his Porsche at one of these things at the stadium, and he hasn’t gone surfing since."

“There is no feeling better, other than maybe sex, than to take a curve at that speed, fast, and feel like you’re hanging onto the road. I don’t know how to communicate it other than that, because the only way you get it communicated is through your butt, being in the car and having the sensation of being solidly planted, and Porsche gives you the feeling of being solidly planted, no matter what speed you’re at." 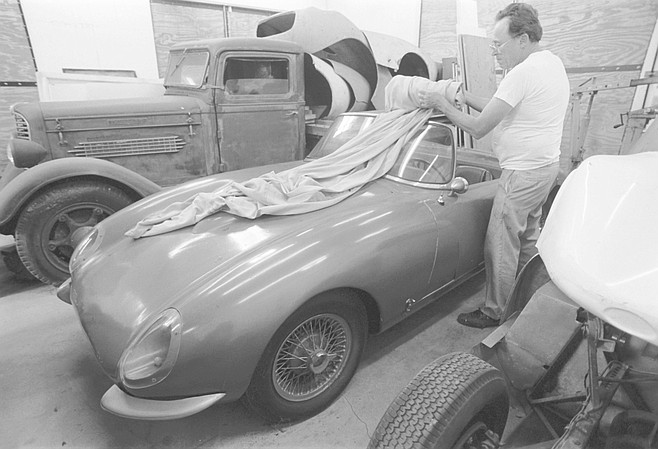 Fred Puhn with a Santee: "At Del Mar they’re coming out on the straightaway, and he pulls out and accelerates to pass, and pop !— the acceleration threw all the oil away from the oil pump and it blew up."

Why Aren’t We Driving Santees Today?

“Everybody at Gyrotor was sort of a car nut, and we were just sitting around talking, and somebody said, 'What America needs is a good cheap sports car. We’ve got the Corvette’ — the vice president had a Corvette, a big fat turkey — ‘and there’s this Austin-Healy Sprite. Why can’t America build an Austin-Healy Sprite?’ That’s what we started out doing, building a cheap, sporty road car that you could race, made for the masses, made in America.” 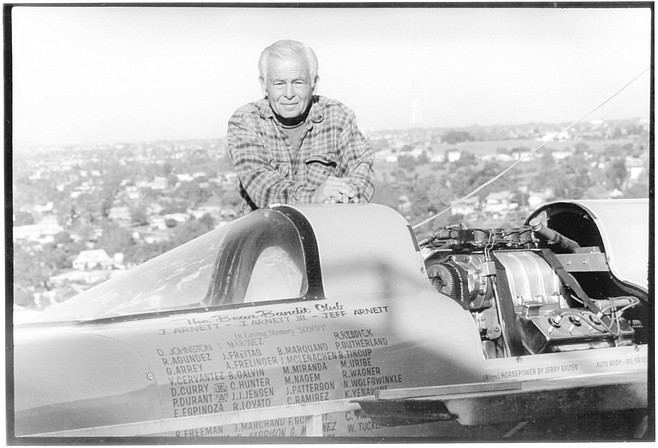 Joaquin Arnett with land cruiser: “Since we were the only Mexican club, we used to laugh and call ourselves the Beaners."

When World War II ended, Joaquin, Carlos, and their friends came back to the old neighborhood. The Road Ramblers and other local clubs had held timing races on Miramar Road before the war. But the highway patrol had put a stop to it, and local speed heads knew they needed a safe, sanctioned place for their meets. Paradise Mesa was an abandoned auxiliary Navy landing strip, a backup in case North Island was bombed.