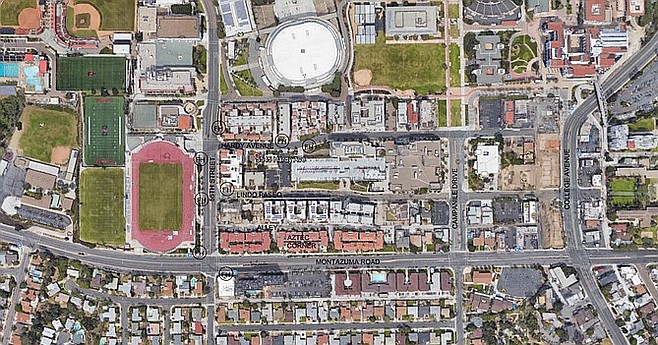 The City of San Diego's efforts to prevent the proliferation of mini-dorms near San Diego State University is under attack, this time from a group calling itself the College Area Students, Tenants, and Landlords Association.

On March 16 the group's attorney, Steven McKinley, filed a lawsuit against the city, claiming the city's mini-dorm ordinance unfairly targets minority groups, low-income students, and others in need of affordable housing.

The lawsuit claims that the City's 2008 decision requires landlords to obtain costly Residential High Occupancy Permits if there are more than five tenants over the age of 18 to occupy a single family residence.

In November of last year the city went a step further and increased fines against property owners who expand normal single family homes into six- to ten-bedroom houses and turn yards into large parking lots.

At the time, as reported by the Union-Tribune, not all councilmembers were on board. District 7 councilmember Scott Sherman expressed his concerns over targeting students and, in effect, reducing the number of affordable housing options.

In 1996 a similar group, College Area Renters and Landlords Association, sued the city for placing a limit on the number of tenants living in a single family home. A trial judge, and later an appellate court, ruled against the city, stating that the ordinance violated statewide standards pertaining to occupancy and affordable housing.

The city will once again appear in court to defend the ordinance.

"Back in the day" when I lived in the college area (3 blocks from campus) my mother rented a room to a college student. Several other residents did too. Most of the students did not have a car. The homes were well built and the area was nice. Now the mini-dorms have created a student slum and the neighborhoods are no longer peaceful or safe. Sad.

It's fascinating the way that developers are trying to co-opt the language of civil rights to cloak their naked greed. Community character, historic preservation, and livable neighborhoods are marched to the guillotine in the name of density, and any homeowner who disagrees with letting them have their way is labeled a heartless greedy racist.

You could almost believe the developers, if they themselves didn't all live in large single-family parcel areas that they jealously and hypocritically protect at all costs from densification.