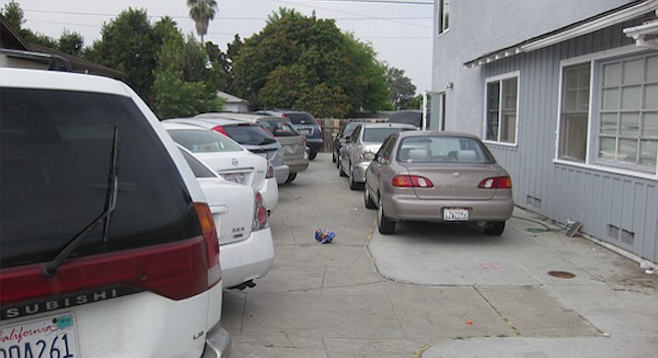 College Area residents are shepherding new rules against mini-dorms toward the city council, rules that would set a limit of five or six bedrooms on lots smaller than 10,000 square feet.

City employees agree with residents' estimate there are more than 800 houses converted to mini dorms within a few miles of San Diego State University.

"We are getting eight, nine, even ten bedrooms in houses — there are so many kids packed into even five bedrooms," said College Area resident Rhea Kuhlman. "There are so many cars parked on front lawns, or they build a massive parking [lot] in back."

The issue even made it to the California Coastal Commission Thursday, August 11, where commissioners were expected to approve San Diego's new rooming-house ordinance. The agenda notes that the ordinance primarily targets the neighborhoods near San Diego State University.

The rooming houses — where every square foot of space except for the kitchen and bathroom has been converted to bedrooms — are prolific in the neighborhoods around SDSU and cause problems for neighbors, starting with blight and parking loss.

The mini dorms consume a lot of extra public resources, generating more trash, more code enforcement, and more calls for police and fire service than their neighbors, city officials say. And the properties are not maintained the way most homeowners take care of their homes. San Diego isn't the only California city dealing with mini dorms.

"Santa Barbara is one of our models," Kuhlman said, noting that residents near UC Riverside and UC Berkeley have also found themselves trying to regulate mini dorms. Area residents have been fighting mini dorms since before 2008, when the San Diego County Apartment Association published a fact sheet.

Ordinances passed in 2008 have helped, but not enough, Kuhlman said.

The College Area planning group is now trying to create a zoning-enforcement area that includes Rolando and Talmadge residences. But a review by the city council's rules committee came back with the recommendation that the zoning overlay is too clumsy, and the planning group should look for an existing overlay it can use in the plan, Kuhlman said.

Tim Taylor, the land-use guy in councilwoman Marti Emerald's office, says the ordinance is still being crafted. "We share the concerns of the community that is suffering impacts from the mini dorms," Taylor said. "There's a tipping point where you may not ever have the community character of a family neighborhood again."

The ordinance is targeting the extra-large mini dorms springing up, where owners have converted every possible inch of space to bedrooms — as many as ten — and then put two students in each bedroom.

"The extra-large mini dorms by necessity have to have a lot of parking, and usually they convert the lot to a parking area where we don't want to have huge lots," he said.

Code enforcement is looking for higher penalties for violations, he noted, because "some violators consider the fine as the cost of doing business."

David Moty, a member of the Kensington-Talmadge planning group, said he sympathized with College Area residents. "What the mini-dorm owners do is make money by grinding these homes down," Moty said. "They're also downgrading the value of neighbors' homes while they're using these homes in a way they were never meant to be used."

Mini dorms are not just a problem in the college area. The problem exist all over the city and the crack city council does nothing about it. When you have mini dorms in areas of the city that are zoned for single family houses and the city does nothing you have a big problem. The city council needs to give the code enforcement people the tools and laws so they can do their jobs. I have called many issues in and nothing ever gets done. All I get from my council member is lip service. The council needs to step up and do their damn job.