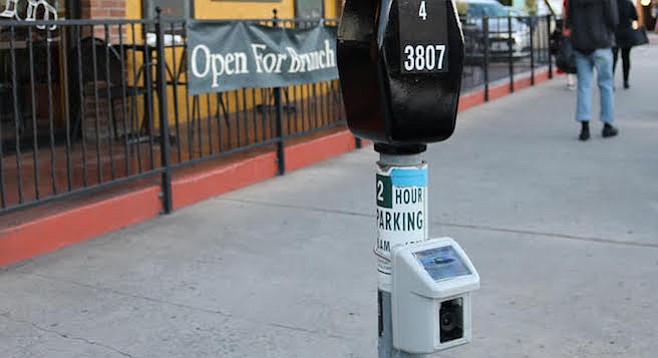 Parking meters with eyes in Hillcrest

Do sensors signal the end of the free or discounted spot?

Donan, 49, from Mission Hills, was referring to the two grayish boxes that appeared to have cameras inside of them mounted on the pole underneath the two parking meters. The meters stand in front of the Village Hat Shop in Hillcrest.

As of 7:00 p.m. on March 23, there were six “mystery boxes” mounted on five parking-meter poles on Fourth Avenue right before it intersects with Robinson Avenue.

“I only noticed them on Fourth Avenue as well,” said Bill Mondigo, 56, from North Park. “I noticed there was one on my meter and the next meter south of me, but not on all the meters.” (There are approximately 20 between University and Robinson avenues.) “So I bent down to check it out and saw what looked like a small Go-Pro-sized camera lens inside the box, mounted at about fender height on the parking-meter pole with a small solar panel on the top.”

Mondigo first saw the boxes on March 21 when he and his daughter went out to dinner. He did not know what to make of them, so he posted a photo on the NextDoor website. One resident immediately responded, “It’s not cameras, it’s a sensor. Let’s say you put money for two hours but only stayed one. When you remove your car, the meter resets to zero; so the next person has to pay in full to park in the spot.”

Addison Parker Stonestreet noticed the two boxes (in front of his store) on March 23. He works at the Artist & Craftsman Supply store on the corner of Fourth and Robinson. “I’m sure that it will make a positive impact if it’s used to create money for our city,” Stonestreet said. “If it’s for the right reasons, I can see why [the City of San Diego] would want to do it.”

Not everyone viewed the new boxes in a positive way.

“I genuinely hope that what is being said on this forum [regarding the assumption that the boxes are sensors] isn’t true [and] that people’s monies are being effectively stolen when someone else could have used the spot with the remainder time,” said Stephanie Cass from North Park.

Gary Lair from Montclair said he does not like the boxes and proposed a solution: “[By] covering the sensor or camera with a piece of duct tape to render it ineffective.”

In 2009, a “High-Tech Single-Space Parking Meter Pilot Project” was announced. A passage toward the end reads, “Later in the project, new parking stall sensors will be tested. The sensors, which are attached to parking stall pavement, detect when a vehicle enters/exits the stall and communicate with the new meter mechanisms.”

"The cameras identified in this inquiry are monitoring and verifying that the vehicle detection sensor inside of the meter heads are working correctly.

"The City is piloting vehicle detection sensors to gather data on the occupancy rate. The occupancy rates tell us how well the meter is utilized by customers. The data received through the cameras is being used to calibrate the sensors and validate the input received.

"These cameras are temporary and are only used for this purpose by the vendor. The monitoring currently in place has been going on for a few months and are only located on these particular meters on 4th Ave."

If the parking space has already been paid for, there's no justifiable reason to charge twice. Someone should sue the City.