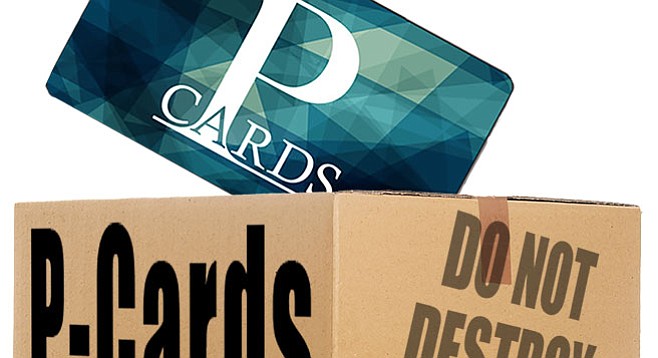 The janitor did it

The P-Cards do not have p-documentation

Disappearing ink on thermal vanishing paper and a clueless janitor have been blamed for missing records at the San Diego Unified School District that a recent audit says could represent only the tip of a massive charge-card debacle. “Due to weaknesses in the systems of internal controls we found that the P-Card program was exposed to a high risk for improper transactions and the potential misuse and abuse of San Diego Unified School District resources,” says the May 17 document.

P-Cards, explains the audit, are used by school district workers “in a manner similar to a commercial or personal credit card. The P-Cardholder, the individual listed on the P-Card, is the only authorized individual to make purchases using that card.” The system is supposed to provide “a method to obtain low cost goods without the intervention of the Strategic Sourcing and Contracts Department’s in the purchasing process.”

However, the report adds, unless proper records are kept, public money can be placed in jeopardy, because the school district bears “responsibility for the payment of the balance for all non-protested charges to the individual P-Cards at the close of the statement period.” According to the auditors, “Our testing identified 22 locations that did not maintain the documentation needed to support 754 P-Card transactions. These totals represent 35 percent of the locations and 28 percent of the transactions selected for testing. Further, we identified 14 locations where 103 monthly P-Card transaction statements were not retained. These missing statements represent $97,910 of the value of the transactions we tested.”

Sounds a lot like the "my dog ate my homework" excuse.

The slobberin' school district can't do much of anything right, or efficiently. They hand out credit cards to various employees, including maintenance technicians, to make the system work smoothly and efficiently, but cannot manage to have any sort of centralized accounting and accountability. So typical of the district for many years, despite reviews, audits, and critical reports.