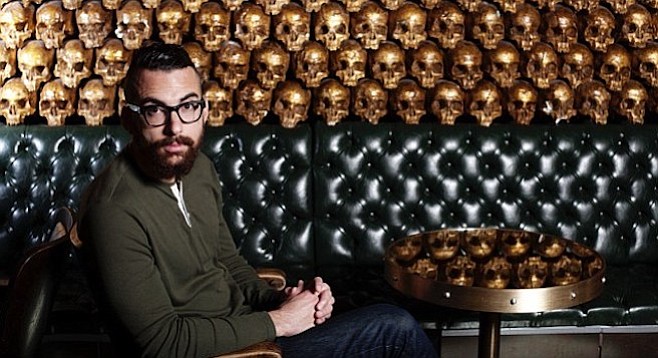 There goes the Neighborhood — past 10-year milestone

"What's worked for us is that we have a good draft system."

East Village gastropub Neighborhood turns ten this week. As the first business opened by the partnership now called Consortium Holdings, it laid the foundation that has become one of San Diego's most recognized hospitality groups, slated to open its 14th establishment this summer.

Today, most Consortium's properties are best known for elaborate interior design and creative cocktail programs. But when Arsalun Tafazoli and Nathan Stanton opened Neighborhood, the focus was beer.

"The impetus behind the whole thing was basically treating craft beer as wine," says Tafazoli, noting that, at that time, beer held little stature among foodies. "I felt the complexity was there," he continues, "but the way big beer had marketed the product for 50 years…[mostly girls in bikinis]… killed the perception of beer in the finer food world."

As with many San Diego beer fans, Tafazoli became enamored with the bold flavors of craft beer after drinking his first IPA. "It was five bucks for a pint, and a pint of Bud Light was four bucks…. For an extra dollar you got this incredible value proposition."

But in those days, every other restaurant didn’t boast endless beer styles on draft. Craft beer fans primarily congregated at dedicated bars such as the newly opened Hamilton's Tavern, the since-closed Liar's Club, and O’Brien's Pub. "They were great places," Tafazoli recalls, "but not necessarily a place you'd go on a date."

Neighborhood opened with 28 taps and a burger-centric menu, at a time when San Diego barely had 20 breweries. Though East Village was beginning to wake up around the still-new Petco Park, business was tough. "The first six months were pretty dismal," Tafazoli remembers. "We were running credit cards to try to make the place work."

But beer fans started to catch on that it was one of the few restaurants downtown offering craft beer in a stylish environment, with good food. "Our sales were pretty even across the board," Tafazoli says, "but we definitely became a beer destination."

Neighborhood received encouragement to keep going, both from beer fans and the owners and brewers of local beer companies that were just about to see business boom, like Stone Brewing, AleSmith, Ballast Point, Pizza Port, and Lost Abbey.

"Toward the end of our first year, the craft-beer culture started really taking off in a really meaningful way," Tafazoli says. "We got fortunate that [Neighborhood was in the] right place, right time."

Tafazolo suggests "the gastropubification of every place that opens" that has made beer much more prevalent in our current restaurant scene has made it less central to Consortium's success — though still a part of it. "What's worked for us is that we have a good draft system. We're cleaning our lines and serving the beer as it should be."

However, ten years on, as the local beer market bends to capture more market share with lighter, more accessible styles, Tafazoli holds on to the idea his restaurants can sway beer drinkers into craft's richer ales.

"I try to push our staff to getting behind bolder flavor profiles," he says. “When you can get someone into something a bit bolder, I think that's more of a win."