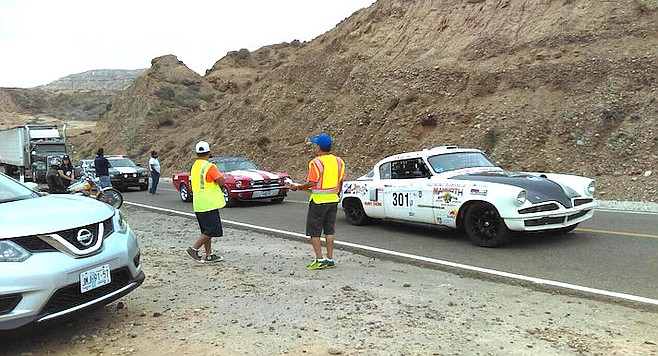 “I always thought that it would be a wonderful road to race on,” said Richard Bailey from Washington, “I mean [look at] the backdrop right now — we are sitting on the highways at [Bahia] Concepcion Bay and the islands — it’s one of the most beautiful places in Baja.” 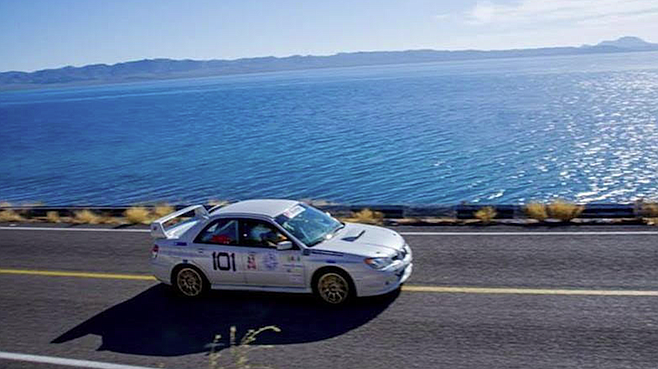 Bailey launched his Subaru Impreza from Ensenada. “It’ll do about 160 mph right now.”

A day before (May 25), Bailey launched his Subaru Impreza from Ensenada. “It’ll do about 160 mph right now,” he said, “[and] it’s holding together pretty good.”

A black and green Honda CRX driven by Martin Caldera, didn’t make it as far. “The car had transmission and clutch problems,” said Pedro Vargas, “it broke down by San Miguel.” 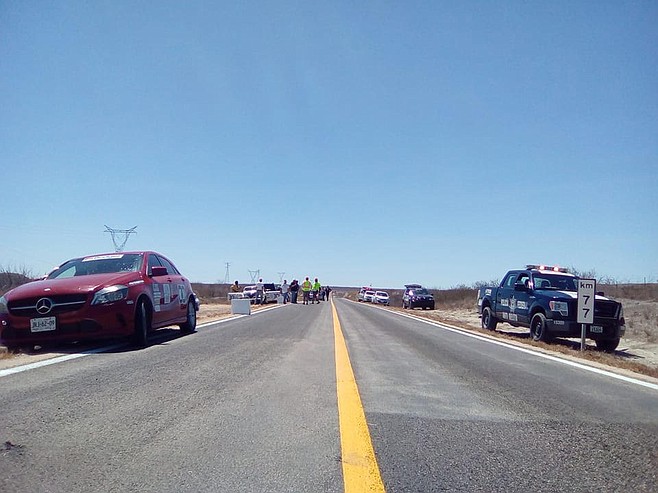 Vargas, 57, founded the Rally Historico Transpeninsular, a 1000-mile road race down the Federal Highway 1 (Carretera Transpeninsular Benito Juarez). The caravan of American- and Mexican-built racecars started at Ensenada (San Nicolas Hotel & Casino) on May 25 and finished down at Cabo San Lucas on May 29. 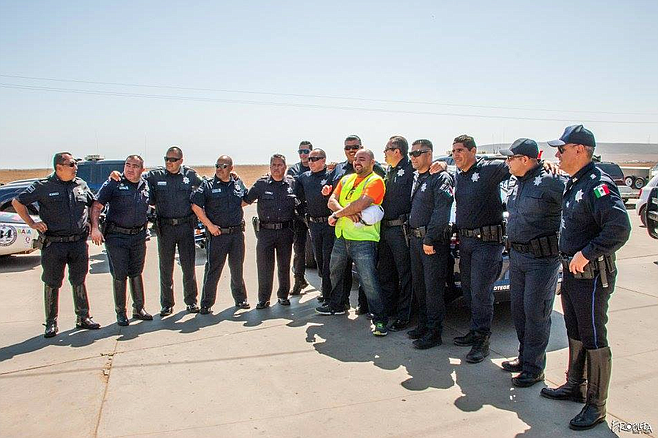 Instead of the racers ducking law enforement at 260 kmh, they were escorted by the Policía Federal de Caminos.

One of the gringos coined Vargas’s annual race the Mexican Cannonball Run, but instead of the racers ducking law enforement at 260 kmh, they were escorted by Mexico’s equivalent of the highway patrol, the Policía Federal de Caminos.

An architect by trade, Vargas was able to inspect the curves and straightaways of Highway 1, mostly a two-way paved road built in the early 1970s. He proposed the gameplan to the federal police. “We had to convince them that we did our homework,” he said. “and we needed to show that we had a $4-million-peso insurance policy.”

Oscar Sanchez, 32, was helping out with the scheduling and safety precautions because some of the cars can accelerate to 160-170 mph speeds. “They need to have an approved race helmet and gear, the cars must pass spec, and [the drivers] pass a simple medical exam,” he said.

In 2015, Vargas and a few buddies did a practice run. A year after four racecars zipped down the Baja California peninsula. Then, almost two weeks ago; seven souped-up classic and modern automobiles crossed the finish line in Cabo San Lucas.

Some couldn’t keep up.

A 1980s Ford Mustang (Fox Body style) raced by Porfirio “Indio” Gutierrez broke down in Camalú, which is about a two-hour drive from his Ensenada hometown. It had rear differential problems.

Chris Eberz’s 1954 Studebaker halted at the last leg from La Paz to Cabo. He still had a winning attitude though, posting “fantastic job … thank you for providing such a great race again.” on his Facebook account. Eberz’s Studebaker was winning the race until his transplanted LS7 Corvette motor “threw a rod and caught on fire.”

The rally had a paramedic vehicle following the caravan. Each racecar had a service-truck chasing behind with a couple mechanics and spare parts. Vargas said that a tow truck and a helicopter were on standby.

The entrance fee was $4000 USD which also included hotel stays and meals for the driver and co-pilot.

On May 29, eight awards were distributed at the Tesoro Los Cabos hotel. After Bailey took the first place award, a fiesta ensued.