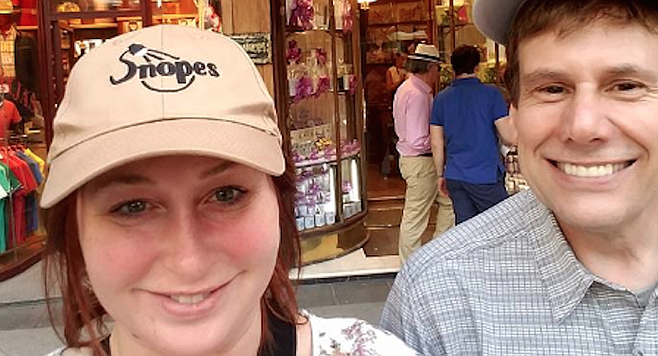 Snopes.com, the fact checking-website with ties to San Diego once commissioned by social media giant Facebook to determine fake from] factual news, is in financial peril. 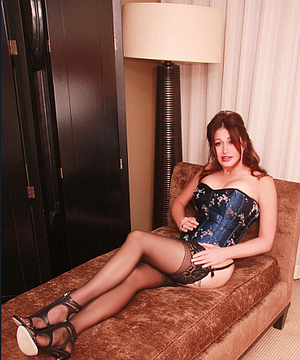 According to Elyssa Young's website, she is "a mature/experienced courtesan."

The website's founder, David MIkkelson, is now soliciting donations to keep the website running after a nasty shareholder dispute has landed in a San Diego County courtroom.

So far, according to Snopes.com GoFundMe.com page Mikkelson has raised at the time of this writing $649,732 in just three days time, money Mikkelson says is needed to keep the website afloat.

Allegations from Mikkelson's divorce paint the website CEO as a money-hungry playboy, who "nickel and dimed" his ex-wife — and former Snopes.com owner — as well as spent nearly a hundred-thousand dollars on prostitutes and trips to exotic places. The suit claims the professional escort and former adult film star, Elyssa Young, whose escort name is Eryn O'Bryn, is Mikkelson's new wife. Young, according to one of the shareholders suing Mikkelson, is now on the company's payroll and accompanies Mikkelson on trips on the company's dime.

According to court documents, Richmond and Schoentrup are using allegations in David Mikkelson and his ex, Barbara Mikkelson's divorce to show that the fact-checking CEO is financially corrupt.

In a deposition, Schoentrup portrays Mikkelson as a conniver looking for a fast paycheck. "David [Mikkelson] disparaged Barbara [Mikkelson] throughout this process, and pettily exploited every opportunity to nickel and dime her. At the same time, [Mikkelson] claimed he was owed large sums of money for his work as CEO, and for purported travel and personal expenses that appeared to have little or nothing to do with Bardav's business. Barbara [Mikkelson] alluded multiple times to various financial or other misconduct by David [Mikkelson]."

Among the misconduct, says Schoentrup, are allegations that Mikkelson and his new wife, who is currently on the payroll, traveled abroad on trips which "appeared to have little to nothing to do with Snopes." At the same time, Mikkelson demanded a substantial pay raise, to the tune of $1.183 million a year to run Bardav, a 355 percent increase, according to Schoentrup.

In May 2017 Mikkelson terminated Snopes' contract with Proper Media. Since, Schoentrup claims Mikkelson of losing control of Snopes.com.

In May of this year Schoentrup and Richmond filed suit against Mikkelson. Mikkelson has since countersued.

Accusations of Mikkelson's mismanagement of money are not new. According to divorce documents and reported by the Daily Mail, Barbara Mikkelson, who served as Bardav's bookkeeper, says during the course of a four-year period David Mikkelson embezzled $98,000 on prostitutes and personal expenses.

According to Mikkelson's wife, Elyssa Young's website, published using the alter-ego, Eryn O'Bryn, she is "a mature/experienced courtesan who understands that while pleasure and passion may be explored in the bedroom, it is hardly the only place." O'Bryn charges $500 an hour and $5,000 for 24 hours.

Richmond and Schoentrup's attorneys are asking that a judge issue a permanent injunction, banning Mikkelson from running Snopes.com and Bardav Inc.

But Mikkelson says the claims are fake, all drummed up to enrich Schoentrup and Richmond.

"I did not 'embezzle' or use any company funds to pay [Young] before we were married and before she was officially hired at Snopes.com," Mikkelson says in an interview. "[She] has long worked on behalf of Snopes.com, first as an unpaid volunteer and then as a full-time employee, and it's only within the last year that she started to receive an actual salary."

In respect to allegations that Mikkelson is mismanaging the website and responsible for a decrease in content, Mikkelson adds, "Last year we saw an extremely contentious presidential election that generated a lot of traffic for us, and traffic in our business typically drops off significantly in the immediately post-election period. Our business always ebbs and flows according to what's going on in the world at the time, whether that be an election, a terrorist attack, or any other major event.

"Using the number of articles published by the site per day is a ridiculous metric for measuring success. It only goes to show how much Schoentrup and Richmond are disconnected from the actual operations of this company. I successfully managed every aspect of this web site on my own for 21 years before Proper Media came along, and now that we've grown to a staff of 16 people, we're more than capable of getting along without them."

And about that 355 percent raise, Mikkelson says that the payment was a package deal. Only a small portion of the $1.118 million was for his salary.

"The claim is a deliberate attempt to obfuscate matters and stir up outrage by confusing salary with compensation. The overall amount I received last year included my salary for running the company, money the company earned before they bought into it, as well as profit distributions to shareholders. And this amount was not some number that I pulled out of the air, but was in fact based on an analysis performed by a leading compensation expert."

Mikkelson says he is surprised by the success of the the GoFundMe campaign.

“I was expecting that maybe in first day we'd raise a couple hundred thousand dollars and then things would slow down greatly and maybe we'd end up with $250,000. The fact that we reached our goal in one day is amazing.

Superior Court judge Judith Hayes will consider Schoentrup and Richmond's motion to issue an injunction barring Mikkelson from managing the website at 10:30am on August 4 in Department C-68.

The more I read about this saga, the more confused I become. Shame there isn't another site like Snopes to fact-check it for me.

But seriously, it is frightening that there are so few other sites on the Internet that specialize in fact-checking clickbait and fake claims in email chains—which is why Snopes is hated by the alt-right. They perform an invaluable service, so I really hope that everyone involved gets this drama behind them quickly and the site can continue with its integrity intact.