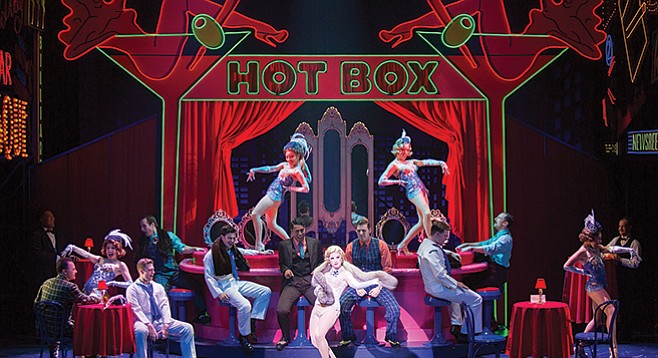 Guys and Dolls — high-brow and low-brow

Old Globe takes over from colleges and high schools

Frank Loesser (1910–1969) grew up in such a refined household, he had to rebel. His family spoke elegant sentences, and his older brother was a classical pianist. So Loesser chose the wilder side. He cultivated a “street mug” banter spiced with four-letter words. Rather than study piano — he learned to play by ear — he worked hard at developing anti-intellectual snobbishness and tough-guy veneer.

He called himself “the evil of two Loessers.” But he never could shake off his sophisticated upbringing. And when he got his hands on Jo Swerling’s libretto for Guys and Dolls, based on stories by Damon Runyon, it was the equivalent of a perfect storm.

Runyon wrote about the “bloodhounds” of Broadway: grifters, tinhorn hustlers, card sharks, the people theatergoers scurried past, noses skyward, on the Great White Way. But Runyon gave them a terse, sculpted speech, with no contractions, as if they majored in rhetoric at some highfalutin institution and their favorite author was Emily Post.

Their words may be affected, but Runyon keeps them on the street, in a dank garage or sewer, hustling for crap games, making bets on everything from Mindy’s strudel vs. cheesecake to the color of a necktie.

In a sense, Guys and Dolls reconciled the great divide of Loesser’s youth: high- versus low-brow. Abe Burrows, who re-wrote Swerling’s threadbare libretto, said the essence of Guys and Dolls “was that these bums act like they were written by Noel Coward.” And they aren’t just pseudo-cultured. Except for hints of off-stage trouble — one would not want to tell Big Jule his dice do not have dots — most come off as vaguely innocent.

We are in “Runyonland,” where things reside somewhere between upside and down, where a crap game’s a modern dance/ballet, and where Adelaide can sing about denying a man her body (“Take Back Your Mink”) while performing a striptease at the Hot Box.

Not only that, Sky Masterson’s real name is Obadiah, which means “servant of the Lord.”

So everything’s spun around. Slick, devilish Sky falls for Miss Sarah Brown, the last woman on Earth he’d choose (come on, even Marian the Librarian might catch his eye quicker than the rigid Salvation Army sergeant). But after a few Bacardi-laced dulce de leches, Sarah flip-flops so much, if she were a salad she’d be “splashing my dressing.”

And Nathan Detroit, as confirmed a bachelor as they come, may abandon his 14-year engagement and marry patience-personified Miss Adelaide. Runyonland, in short, is the Big Apple, 1950, through the looking glass.

The Old Globe’s Guys and Dolls opens with the unexpected. Instead of the traditional, roughly five-minute overture, director/choreographer Josh Rhodes gives us Runyonland in the flesh. With set designer Lee Savage’s flashy neon backdrop (an anatomy of glitzy Broadway marquees), the cast wends and wanders near the Save-a-Soul Mission, at 409 49th Street. As they kaleidoscope around the stage, about half are not what they seem. Surely the sailors on shore leave in dress whites are who they are, and that harried woman (Linda Libby, a hoot) obviously a tourist who sees predators amidst the prey: beneath those two nuns’ habits? Gangsters. And the homeless man asking for food? In cahoots with the woman selling recycled apples.

Rhodes’s intro is a surprise and a delight. But purists, for whom change is anathema, may object to some of the Old Globe/Asolo Repertory Theatre’s choices. The gangsters speak Runyonese but not like parroting robots. Theirs is more ingrained and less affected than the original. They actually talk this way. Brian C. Hemesath’s costumes aren’t brash, cartoony reds and yellows from the Dick Tracy School of Bas Couture. Except for Nathan Detroit’s maroon and red-striped billboard of a suit, most are blends of checkerboard plaids.

Guys and Dolls is one of the great American musicals (number one, many contend). But it’s produced more in colleges than on a big stage (the last one I saw was at a high school, where my niece rocked the boat to heaven as Nicely Nicely). The Old Globe/Asolo rendition not only gives it the size, the voices doing Loesser’s requisite legato, and the spectacle, under Sinai Tabak’s musical direction, it’s got one of the finest pit orchestras I’ve heard in San Diego.

In probably any other production, Veronica J. Kuehn’s Miss Adelaide would steal the show. She’s funny, adroit physically, and she sings “squeak-prano,” spiking songs with high-pitched injections that are in tune. Her “Adelaide’s Lament” is unforgettable.

Kuehn would steal it were Terrence Archie (Sky), Audrey Cardwell (Sarah), J. Bernard Calloway (Nathan Detroit), Todd Buonopane (Nicely-Nicely), Ralph Johnson (Arvide Abernathy), and the others less talented. For that matter, if any of these polished performers were in another version of Guys and Dolls they’d probably steal it, too.

As impressive, with this cast there’s honor among potential thieves. They gladly share the stage and communicate most of all that they’re overjoyed to be a part of this “back to back aces” show.

Playing through August 13, Sunday, Tuesday, and Wednesday at 7:00 p.m. Thursday through Saturday at 8:00 p.m. Matinee Saturday and Sunday at 2:00 p.m. TheOldGlobe.org

Great show! Performances were sterling, the dance numbers dazzled. The full-voiced choral numbers had such a rich sound that I sometimes didn't want the chords to end. Don't miss it!!