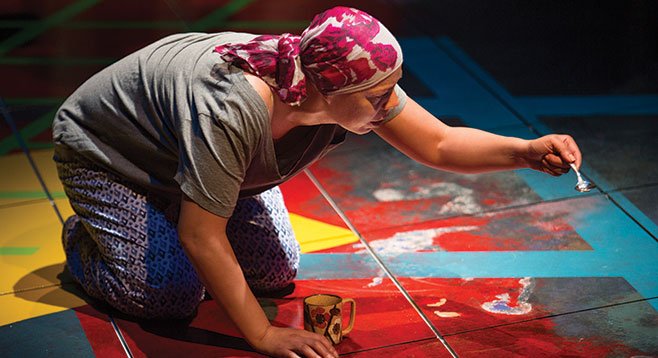 Dance on a minefield

The Old Globe serves Water by the Spoonful.

Water by the Spoonful

Quiara Alegria Hudes’s Water by the Spoonful won the Pulitzer Prize for Drama in 2012, and deserved it. Judging by the Old Globe Theatre’s bland, by-the-numbers opening-night performance, you’d wonder why.

Do you know a crack-head? Know any “rock-heads” addicted to “eight-balls”? Know any “cluckers” in recovery? No? The production doesn’t either.

Hudes writes terse, funny, street-authentic dialogue. Her characters are in such hell, a spoonful of water every five minutes would bless beyond price. Those in recovery talk “real”; they power-bomb each other with tough love and “crack humor.” The latter triggers laughter and torches illusions.

Two of the most important plays of the past few years — Water and Lisa D’Amour’s Detroit — are about addiction. An unpleasant subject to be sure. But the teachers, the healers — nay, the heroes — in both are recovering addicts, half out of hell, determined to help others. In Detroit, where the foreclosed neighborhood resembles a combat zone, they perform a surprising therapy. In Water, the gravest sinner, Haikumom, is a saint, at least to her extended, chat-room family.

Both plays call for radical recovery. And not just from drugs. In Detroit, a jobless couple was “addicted” to a middle-class lifestyle that failed them. They’re so entrenched, only a severe choice can reinvent them — even if it means torching the old ways.

In Water, Elliot Ortiz, a wounded, honorably discharged Marine, had a horrific experience in the Iraq war. Crack users maniacally “chase the ghost” of their first euphoric hit. Elliot’s the opposite: a ghost chases him. Traditional coping mechanisms and piles of pain-killers aren’t cutting it.

When they were children, Elliot’s mother abandoned him and his sister in a time of grave need. It’s 2009. Back from the war with re-entry shock and a damaged leg, Elliot works at Subway; he also does TV commercials and aspires to Hollywood stardom (each of Hudes’s characters has inner extremes: enough baggage for an airport terminal and occasional glimmers of grace). Except for his cousin Yaz, an adjunct music teacher, Elliot has no connections. He’s so addicted to alienation, he wouldn’t march in his “own parade.”

Haikumom — a name dripping with irony, we learn later — home-schools recovering addicts long-distance. A junkie “who dug lower than the dungeon,” she created a chat-room on the internet. She counsels with strict rules, censors foul language. Among her hyperspace connections: Chutes&Ladders (a “non-confrontational” African-American man in San Diego), Orangutan (Japanese-American woman wanting to see the birth parents who abandoned her), and Fountainhead. A rich “newby,” he takes such pride in his condition, his chat-mates try to gouge him a new one.

Fountainhead, who wrecked his Porsche and once headed a large company, doesn’t fit the “crack-head” stereotype. But then none of the characters do. All are articulate and come from various social classes. What they share is what the Globe’s opening night missed: the desperate, hour-by-hour firefight against giving in. They crave, they burn in hell, but the cast rarely conveyed the tangled immensity of that “jones.”

As one character says, “it’s like trying to dance on a minefield.”

Water should tighten like a tourniquet. Too often the cast played the idea of a “chat” room literally. They spoke in narrow, edgeless tones. There was too much “air” — space between deliveries — in the dialogue. The pace lagged throughout. Portrayals lacked nuance.

Marilyn Torres’s Haikumom always conveyed an inner life; a tormented past bubbled below. The others stayed near the surface in varying degrees. Rey Lucas gave Elliot a viable arc but until the end, was two-dimensional, as were Rubio Qian (Orangutan) and Sarah Nina Hayon (Yazmin). As Chutes&ladders, Keith Randolph Smith had a stable presence and many of the best lines, though his measured voice felt mannered. As Fountainhead, Robert Eli was obviously playing against the stereotype. But he was so glib it looked like Fountainhead wanted to cut down on calories, not cut away from the “hard iron” of crack (actor note: play the “jones”).

Along with the need for radical recovery — which, given the economic crisis, myriad foreclosures, and joblessness, could be a metaphor for these times — Water is also about movement and stasis. The characters communicate globally, via the internet, but are immobile. Ralph Funicello’s set nicely portrays cyberspace: a jazzy, multicolored floor and colored wires flashing above, but passes on Hudes’s homey, “cracked” details: “a duct-taped La-Z-Boy, salvaged trash,” and “busted up” chairs, the “worn-in feel of life.”

Water by the Spoonful, by Quiara Alegria Hudes