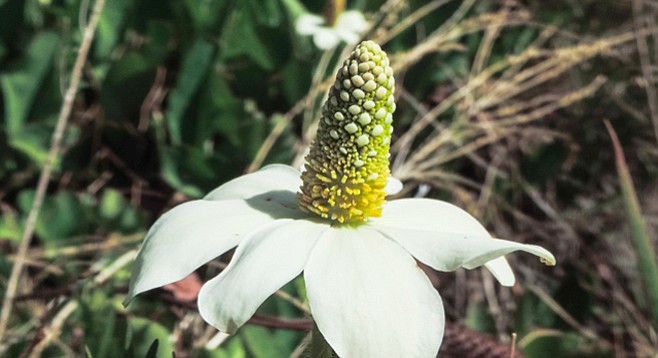 If your route into Anza-Borrego Desert State Park takes you on S-22, sometimes known as Montezuma Grade, and past the hamlet of Ranchita, then you are well aware of the inspiring vistas as you wind your way down to the desert floor. This road was officially opened on June 24, 1964, and was dubbed the “400 Story Glass Elevator” by James Copley, then Chairman of Copley Newspapers. 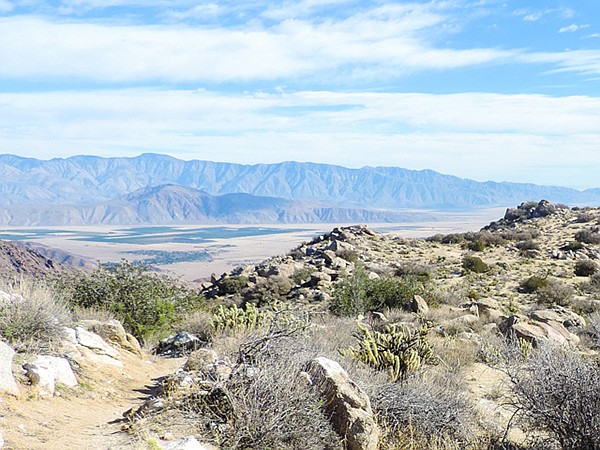 This also means that you have driven past the entrance to Culp Valley Campground on the left with its small and easily missed sign. Tucked into the upper reaches of the San Ysidro Mountains, this is the launching point for a short but extremely scenic hike to one of the few permanent water sources in Culp Valley. 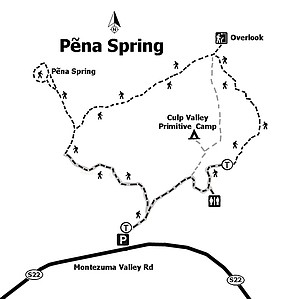 Watch for an area of lush green vegetation to the left side of the trail.

Known as Pena Springs, it is named after Pena Paroli whose family once ran cattle here in the early 20th century. Remnants of the Paroli homestead can still be found one mile further down Montezuma Grade. In addition to early homesteaders, this area was an important water source for the native Cahuilla Indians as they traveled between the warm desert floor to the cooler climes around what is current day Ranchita. At 3,500 feet in elevation, temperatures here can be noticeably cooler than those found in the desert proper and can provide a welcome respite from summer’s heat.

Locate the vault toilets in the campground and from there head north for about 100 yards to find the well-marked start of the trail. The first 0.5 mile of this trail is smooth and wheelchair accessible. At the 0.5 mile mark, the trail stops at the California Riding and Hiking Trail (CRHT), which becomes impassable for wheelchair access.

A turn to the right is a short distance to the Culp Valley Overlook that has a panoramic view into Anza-Borrego, Borrego Springs, and the Santa Rosa Mountains to the east. Retrace your steps to the T-intersection and continue straight ahead. The trail now follows the rim of the south fork of Hellhole Canyon. After approximately 0.5 mile, there is another trail intersection, turn right and follow the trail down toward Hellhole Canyon for around 0.25 mile. Watch for an area of lush green vegetation to the left side of the trail indicating the presence of abundant water either at or close to the surface where red willows, mule-fat and blue elderberry grow. There will be multiple small trails leading off into the vegetation.

Follow the most worn path that will eventually end at the spring. In this case, it is an old galvanized pipe protruding from the ground approximately two feet. In all but the driest years, a trickle of water is found coming from the pipe. While it may look refreshing the water should be treated before drinking. In the spring and early summer the marshy ground around the spring will be covered in what appear to be large, white flowers. These “flowers” are Yerba Mansa and the white flower petals are actually bracts, a form of modified leaf. The true flowers are tiny white dots found on the conical structure above the bracts. Yerba Mansa is known to have both antimicrobial and antibacterial properties and has been used by Native American and western healers to treat a variety of ailments.

Nearby you can find the remains of an old wooden watering trough. While this area was burned in the 2004 Pine Fire, the presence of water in the trough may have prevented it from being burned. This natural artesian spring is now an attraction for many of the local wildlife. If you wait patiently near the spring you may be rewarded with sighting of the Common Yellowthroat bird with its bright yellow chest and striking wide black mask giving it the look of a rakish desperado. This is a shy bird so you are more likely to hear its calls of “witchety-witchety-witchety.”

There may also be a sighting of Gambel’s Quail; tubby birds that would much rather run than fly. They are usually found in large groups, known as coveys that can include dozens of birds. A close relative to our California quail, they can be distinguished by the male having a distinct black belly patch. Typically, the ranges of the two species do not overlap, but here they do, so look carefully for the black belly patch to identify Gambel’s Quail.

To continue the journey, retrace your steps back to the junction of the CRHT and turn right where a there is a short walk to a small parking area. From here take the dirt road back to your car.

Distance from downtown San Diego: About 75 miles (Ranchita). Allow about 1.5 hours driving time. From Ramona, drive east on SR-78 to Santa Ysabel. Turn north on SR-79 and drive to the junction with SR-2/San Felipe Road and turn southeast. At the junction with SR-22, turn east to Ranchita and follow SR-22 for 9 miles to the signed entrance for Culp Valley Camp on the left.

Difficulty: Easy, with about 300 feet of elevation gain/loss. The first half-mile is wheelchair accessible out and back. There are facilities but no water at the trailhead.