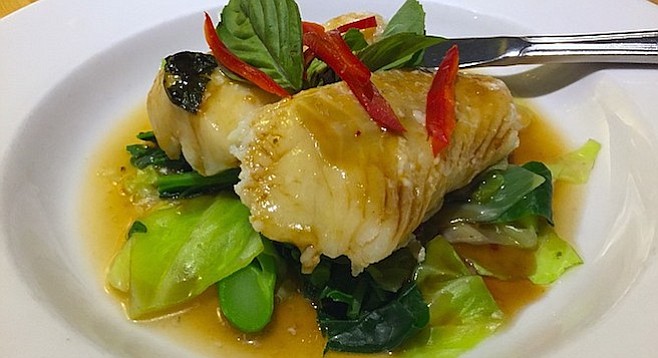 Swayed by the curry

Sometimes sifting through delivery apps is the best way to find a new restaurant. You pick a food genre, browse, and then select something and it arrives, like Netflix for dinner. I discovered Koon Thai Kitchen this way. I sifted through the menu in my iPad, saw some photos, tapped on them, and then tapped the “checkout” icon. 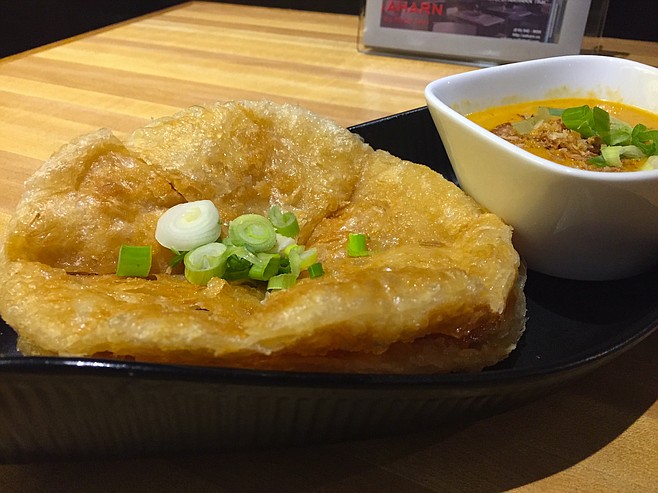 The Roti appetizer, with a spicy curry dip so good that it influenced the choice of entrée

My husband David and I work together from home. At times that can mean being on a deadline, with neither of us wanting to deal with making dinner happen. That’s when the apps come out. When we’re in the middle of an extended work-bubble we’ll order Asian or Mediterranean food, something with traditionally large portions so we know in advance we don’t have to think about meals the following day because the fridge will be filled with leftovers. Koon Thai Kitchen is one of our regular reorders.

It wasn’t until we were driving by on our way to another restaurant one night that I learned Koon Thai’s brick-and-mortar was not only in the middle of Convoy but in the same strip mall we frequent (because of Nijiya, a Japanese market). Once we saw the sign, David and I agreed to forgo our initial plans and see what Koon Thai’s food was like when served on a plate rather than in a Styrofoam container. 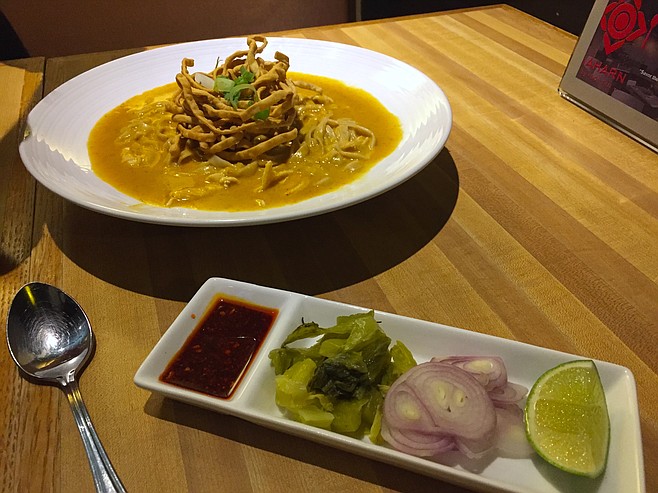 The interior was warm, with black booths along one wall and golden accents to match the golden wood of the floor, chairs, and tables in the center. On one wall was a gold-and-black triptych that tied everything together. The color-scheme highlights the name Koon, which is the Thai name for the cassia fistula, better known as the Golden Shower Tree.

The place was a bit loud, with a handful of couples and a few families with small children making up the crowd on a Sunday night after 8 p.m. We began with an appetizer, fried roti (like a puffy flour tortilla) with a side of curry for dipping. The roti was on the greasy side, but the curry was rich and spicy.

When we order for delivery we get simple classics, such as Pad See Ew or Pineapple Fried Rice. In the restaurant we felt emboldened by the proximity to the kitchen. David ordered the Pla Nueng Ma-Now, which was a steamed fish fillet over bok choy in a spicy lime-garlic broth, garnished with peppers and mint leaves. It was a generous portion of cod, and it was flaky without being dry.

I’d been considering the sweet basil fish (one of my favorites at Saigon on Fifth), but that curry swayed me and I ended up getting the Khao Soi Curry Noodles. The server told us this dish originated and was very popular in her hometown in Northern Thailand. The egg noodles are served in the same spicy curry soup, along with tender pieces of chicken. It came with accompaniments: cabbage, shallots, and chile in oil. The sauce like soup with thick, chewy noodles, was reminiscent of the Japanese curry udon but a tad sweeter.

The only odd thing — and the part I pushed aside, as neither David nor I were interested in it — was the nest of fried egg noodles atop the dish. Those could have worked if they were crispy. Instead, softened by the steam of the dish below, they came across as stale. No matter, as there was plenty there to like, and so much in that big dish that I ended up getting some leftovers after all.