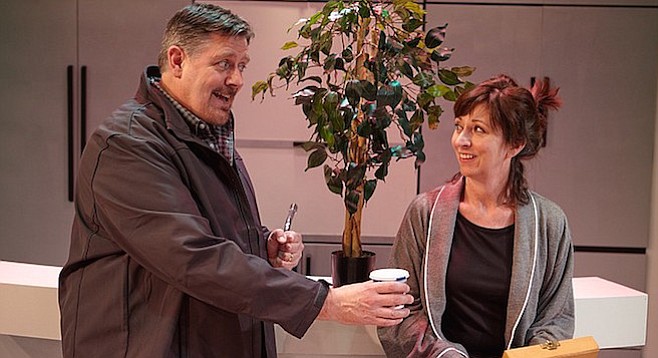 We try to remember…we imperceptibly edit, ruthlessly censor, select, and reshape until memories become more like myths. All of this plays in your mind and takes root during Marjorie Prime, Jordan Harrison’s quietly unsettling drama with bright splashes of humor. Harrison, whose other major works are Kid-Simple and Act a Lady, ranks among the new and exciting writers of our time. In Prime he explores the mysteries of human identity.

The story, which covers a year or two and many lifetimes, is set in the future – probably the mid-21st century. We are in the upscale home of married couple Tess and John. Her 85-year-old mother, Marjorie, lives with them. The future looks much like our present, except tidier and better organized. Set designer Marty Burnett has created the illusion of a futuristic scene without going all Star Wars on us, and it works in a cool, meditative style.

Marjorie’s companion is supposed to be her husband Walter, or rather a facsimile. Presented as a handsome, fit man of 30, he is known as a “prime,” the latest device for helping people whose memories are fading. As Jon says of Walter, “It’s amazing what they can do with a few zillion pixels.”

Since the 19th Century, artificial beings have been common in fiction, as in Mary Shelley’s Frankenstein or Karel Capek’s R.U.R. (Rossum’s Universal Robots)." Harrison refines this technique by portraying these AI entities, “primes” in a normal domestic setting.

Essaying the part of Marjorie, Dee Maaske gives us a delightfully feisty aging mother, who can be introspective and brutally honest if necessary. Maaske cleverly avoids the trap of sentimentality and heightened emotions. Elaine Rivkin plays her daughter, Tess, in an effectively realistic manner. She is the skeptic of the piece and tries to be the voice of reason, but soon runs amok with resentment and bitterness. She never comes across as just bitchy, which is a credit to her characterization.

Gregory North portrays her husband, Jon, the even-tempered, sensible one. He delivers a well-modulated performance. His expert handling of pages of non-stop dialogue helps to move the play along at a comfortable pace. Steve Froehlich, as Walter, handles the difficult role of a “prime” with much skill. Not too much of a robot, nor too human. This works on some basic level.

Director Matthew Wiener has directed this play in a straightforward, ordinary way on the surface and yet has deftly highlighted much important subtext throughout. The lighting and projections of Matt Novotny and the evocative sound design of Melanie Chen do much to enhance the ethereal mood. Written with consummate carefulness, Marjorie Prime succeeds as futuristic speculation, as a riff on technology taken from the headlines. But it also gives us a poignant portrayal of everyday existence. A tale of rather ordinary people, who may be in great danger of losing their individuality.