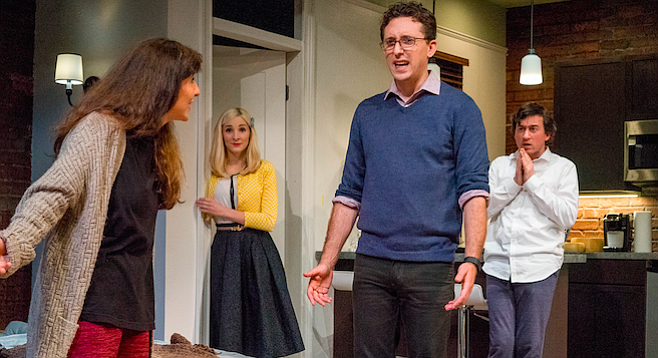 These kids despise each other on a visceral level...

If I were a member of the Feygenbaum/Haber extended family circle that figures so prominently in Joshua Harmon’s Bad Jews, I would dread get-togethers (funereal or otherwise) at least as much as Daphna (Danielle Frimer) and Liam (Josh Odsess-Rubin) abhor the prospect of spending more than half-a-second in the same room. These kids despise each other on a visceral level, transcending the ideological differences that underpin the play’s central conflict over who, if anyone, deserves the cherished chai that the family patriarch carried through the Holocaust and ever after. While the language with which Daphna and Liam go fully Jericho on each other’s personal worlds falls wholly within the realm of the theatrical, the underlying enmity smacks of familial truth. To wit, only relatives could hate each other so.

Barring the rare instances of real-world nemeses, why is it that so many of the bitterest, most poisonous relationships lie between family members? One, easy answer arises from family’s somewhat compulsory nature. Were Daphna and Liam strangers, they could simply ignore each other, and their mutual dislike would remain forever casual and undeveloped. Forced together by inseverable family ties, even for incremental periods, they feed their drama till it blooms into full-fledged feud.

But the bitterness of family relationships runs deeper than mere mutual dislike enhanced by forced proximity. Daphna and Liam’s vitriolic tirades mirror each other in both structure and content. Watching them leaves the impression that each sees the other as a similarly terrifying mirror — one that reflects everything they’d leave behind, if only it weren’t written in their genes and impressed on them since birth. Family members have that eerie power to force self-reflection in all the hardest ways. In family, we see ourselves; and seeing the parts of ourselves that we would rather forget, or bury so deep they never show, can be a painful thing indeed.