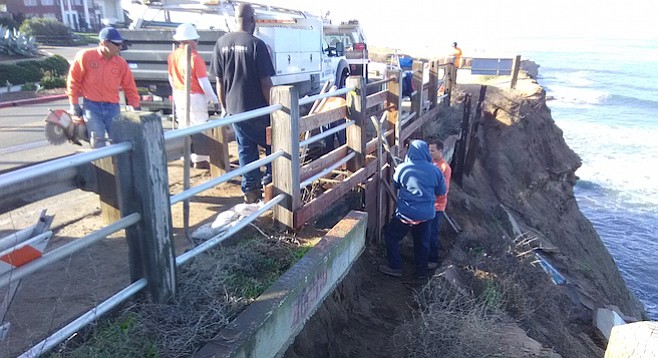 City of San Diego work crews began repairs today (January 17) on a sinkhole in the 1000 block of Sunset Cliffs Boulevard. The hole has been a concern of the neighborhood and the Sunset Cliffs Park Council for about a year. 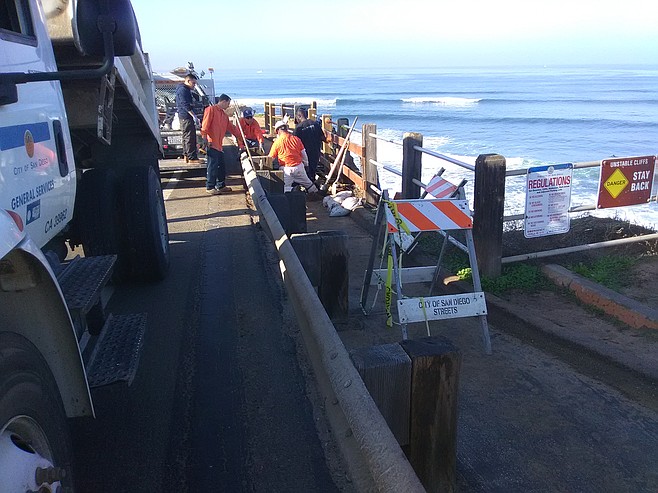 The foot trail was made by moving the guard rail into the street, leaving a narrow strip of asphalt for pedestrians to pass.

First reported by park council member Dede Ridenour to the city's Park and Rec Department, the hole opened up in the foot trail between the street guard rail and the cliff edge. Trail users were forced to jump the guard rail into the street to get around the hole. Concerns about public safety and erosion and bluff loss seemed to fall on deaf ears.

The crew's first action — over a year ago — was to lean some plastic barriers and yellow tape over the hole and place sand bags in front of it to block the runoff. It sat like that for a year. Park users navigated around the band-aid.

The foot trail was originally made by moving the guard rail into the street, leaving a narrow strip of asphalt for pedestrians to pass. The trail is part of the park and under the Park and Rec Department's care; Street Division maintains only the streets. So it was unclear which department had jurisdiction over repairing the hole.

Monica Arrendondo of Street Division, on site with the work crew, stated that the repair will be completed in the next two days before this weeks forecasted 4 inches of rain arrive. 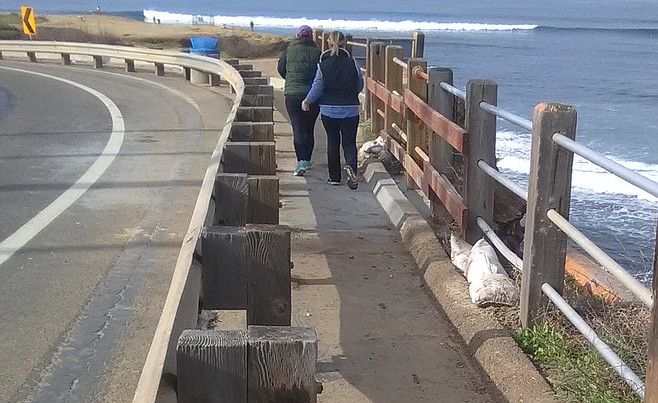 Sounds like typical SD city fumbling; two departments are involved, and they cannot cooperate and take action. This is the sort of thing that needs to be fixed in the city. But it's so much more fun for the council and mayor to fret about the Chargers, the stadium, the convention center and who gets credit for a flashy project.

Repairing this erosion is just a temporary measure. The bluff is eroding away steadily as a result of natural processes. Nature can't be cheated. So, what's the permanent solution? Probably a bridge or bypass.