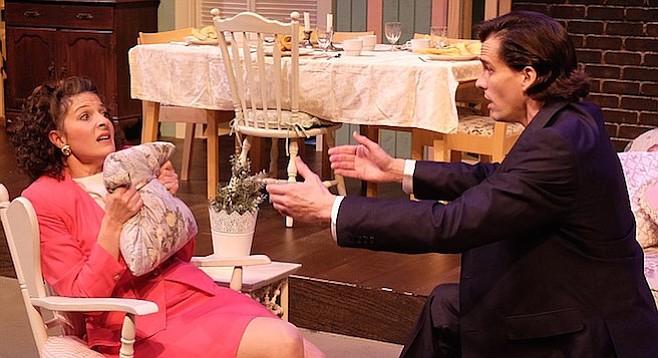 Bob Schroeder is an actor. Have we seen him in a movie? “That depends on where you sit.” Bob has done shows, even Fiddler. Plus, his new part-time job’s a bit like theater. He works for the Heaven Sent Escort Agency.

Last night he took an elderly woman to the opera. Tonight he must play the role of his life. All he knows in advance: dinner with a woman, wear a suit. He learns on the spot that his character is David Steinberg, a Jewish doctor in love with Sarah Goldman. Why? Sarah is in love with Chris, an advertising executive. Her parents want to meet her new man, but Chris is a goy, a non-Jew, which is seriously verboten with Abe and Miriam Goldman.

So Bob — aka David – essays the role of Chris at a family dinner. It could be the actor’s nightmare: Bob’s a non-Jew playing a Jewish doctor with no rehearsals or “sides.” But he’s a quick study, and what he’s gleaned from theater might carry not only the evening but also another man’s bride-to-be.

James Sherman’s comedy has a score of leaden one-liners (“desperation is the mother of invention”; “people are just dying to get into that hospital”), some shaky plot devices (why doesn’t Sarah’s alert therapist-brother Joel, who sees through the ruse, check Bob’s references at once?), and slow spots.

Beau Jest is a theatrical bagatelle; a potentially complex situation given a swift, facile solution. But Lamb’s Players and director Kerry Meads give it the same precise timing and attention to detail they gave Kaufman and Hart’s far superior You Can’t Take It with You.

On opening night, Erika Beth Phillips over-played the role. The neuroses were credible; excessive tics and twitches cartooned them. By contrast, Omari Schein (Joel) has reached the point where he can just enter a room and get a laugh. Okay, he’s wearing a bulbous brown sweater from the Dark Side of Couture, but still…

Jason Heil (Chris) does a solid turn in a role both thankless and tricky. He must appeal enough to capture Sarah’s heart, yet less so when Bob comes along. Nicely done.

Ross Hellwig can add Bob to his long list of successes. In many ways Beau Jest is a comedy of manners. Hellwig must play Bob’s and David’s, and improvise the latter. Hellwig’s not only a hoot, he’s a moment-to-moment marvel.