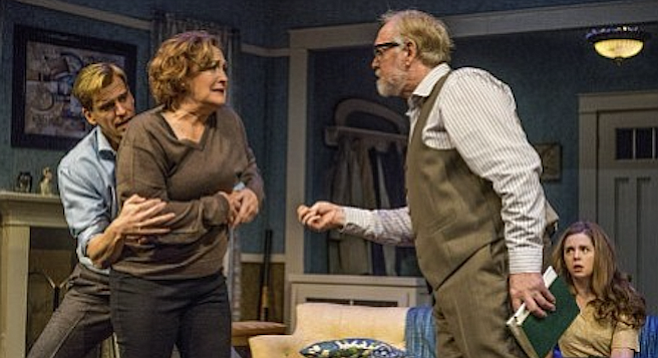 Who's Afraid of Virginia Woolf at Intrepid Theatre Company

Martha: “Truth and illusion, George; you don’t know the difference.” George: “No. but we must carry on as though we did.” Not anymore.

Who's Afraid of Virginia Woolf?

In Edward Albee’s Who’s Afraid of Virginia Woolf?, during an all-night drunkathon that ends in “total war,” George will try to wean Martha from her most cherished illusion.

It’s September, 1962. School begins soon at New Carthage, a small, New England college. It’s a nervous time for new faculty, who must come onboard without tripping on the gangplank. It’s 2:00 a.m. At their home, associate professor George and “braying” wife Martha turn a quiet meet-and-greet into Walpurgisnacht (“witches’ night”). An initiation (call it “breaking in the newbies”?), several confessions, and an exorcism follow.

In Who’s Afraid, it’s as Edward Albee took all the TV sitcoms and traditional family value films of the ’50s, shoved them in a vise, and squeezed out demons. He also pushes the emotional resources of the cast.

The play’s a three-act, atonal opera that frisks, tests, and smashes limits. It may, or may not, pick up the pieces. The results of the exorcism are still pending.

Except for some small, opening-night glitches, Intrepid Theatre Company has done a remarkable job with one of the most demanding plays in the English language. They have also rebalanced the story, too often treated as a star vehicle — “Here’s Martha!”

In most productions, her point of view dominates: George is a wuss, Nick’s a cutie pie, Honey’s a cipher. Instead, Christy Yael-Cox has directed an ensemble show: all points of view matter, with George’s a mite foremost.

Though he says, “You can’t reverse yourself [and] start back up once you’re descending,” George knows it’s time to “clean up the mess.” He fights for an illusion-free marriage. Along with one in history, he must have a doctorate in disillusionment.

Among other things, Robert Smyth’s dour, worldly-wise, excellent George is a crack comedian. Smyth brings an intelligence to George’s observances both credible and funny (for once an actor playing George has read all his references). Beneath the surface, which Martha lambastes with one cutting remark after another, is an often brilliant mind. Smyth’s so convincing that one wonders why George short-circuited his career.

Ross Hellwig and Erin Petersen are much more than the usual straw dogs, Nick and Honey. Hellwig deftly fractures Nick’s, classy, Arrow-shirt ad, all-American veneer and reveals his inner Storm Trooper. And Peterson’s a revelation as fragile Honey. Is she actually drinking all those brandies? She must be; she looks so gravely ill and blind dead drunk she may not finish the show. Only stopwatch comic timing suggests she’ll see it through.

Mike Buckley’s set isn’t the “dump” Martha sees. Illumined by Curtis Mueller’s late-night lamp effects, its modest furnishings (and books on the floor) make it an unlikely, but effective site for the three-ring circus to come.