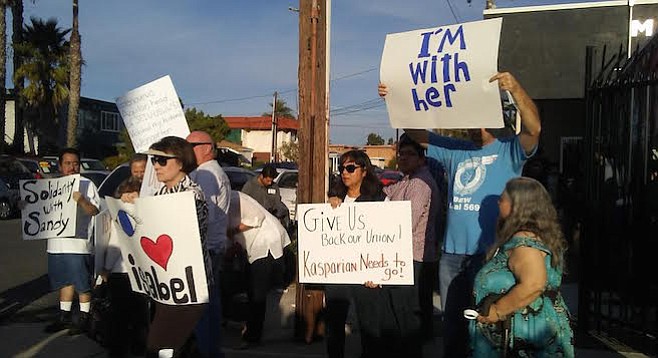 "We're here to show our support for Sandy and Isabel."

It was hard to tell if the local Democrat celebrities outside the Chula Vista Machinists Hall Saturday afternoon (January 7) were taking part in the protest or just there to vote.

About 150 people stood around outside the hall and in the parking lot, some carrying signs showing support for the two former union employees who recently sued United Food and Commercial Workers Local 135 chief Mickey Kasparian for sexual harassment, retaliation, and other boss misconduct.

Inside the hall, 80th Assembly District residents voted to pick delegates to represent the district in the region and at the state party. "We're here to show our support for Sandy and Isabel, " said organizer Brent Beltran. "This is Sandy's day."

One candidate for a delegate's slot, Sandy Naranjo, filed a lawsuit against Kasparian two weeks ago for a litany of workplace malfeasance including retaliation, alleging he fired her because she is married to a member of another union that frequently opposed Kasparian.

Naranjo has been a state Assembly district delegate for more than a decade, according to her candidate statement. (Each Assembly district has 14 elected delegates who attend statewide conventions and conferences where the party's goals, policies, and action plans are set.)

Protester Terence Hunt held a sign that read, "We stand with Sandy and Isabel" and tried to help me count protesters at the cordial, casual, assembly. There was a lot of hugging and catching up between friends and very little conflict despite the protest. Hunt said he knows both women and they are the "best of the best."

Besides Naranjo, Isabel Vasquez sued her former employer two weeks ago, saying she had to have sex with Kasparian to keep her job. Kasparian has vigorously denied allegations made by both women.

Unions are nothing but trouble. They outlived their usefulness decades ago and have become nothing but Communist mouthpieces, looking to enrich themselves.

ANOTHER LOCAL 135 EMPLOYEE FILED COMPLAINT WITH DEPARTMENT OF FAIR EMPLOYMENT AND HOUSING, CLAIMING SHE WAS DEMOTED FOR SUPPORTING VASQUEZ, WHO FILED FOR SEXUAL HARASSMENT IN DECEMBER. Anabel Arauz has worked for local 135 since 2011. Her supervisors have been Richard Barrera and Mickey Kasparian. Kasparian was sued for sexual harassment by Isabel Vasquez in December. Arauz told Barrera that she will be a character witness for Vasquez, a long-time friend. Arauz charges that after she stuck up for Vasquez, she was demoted to a lesser job. This was meant to be a message to other employees, says Arauz. Best, Don Bauder

Pretty sure that's how they still operate DB.