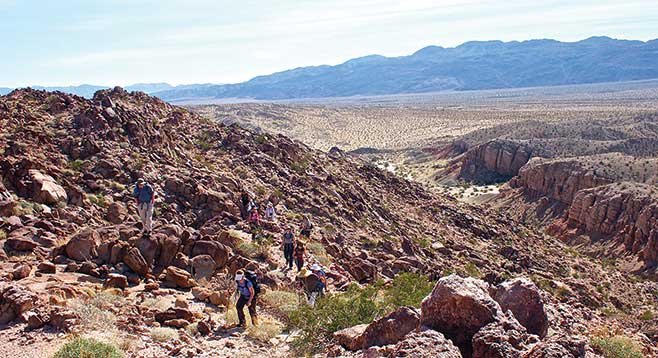 Caffeine found where it shouldn't be — in nature

Use your head and the head at the trailhead

Water scientists say that the discovery of caffeine in creeks and lakes throughout local recreation and open-space areas suggests that people are answering the call of nature without questioning if it's a good idea for their surroundings to be peed on.

In scientific study language: "In watersheds containing little or no development and mostly open space, a fair portion of surface water samples were found to contain caffeine. An association was found between caffeine detection and recreational use," according to a study written by Carey Nagoda, a water resource control engineer with the San Diego Regional Water Quality Control Board.

Nagoda’s findings — that creeks and reservoirs at 14 of 16 recreational sites tested positive for caffeine — were included in the executive director's report in January. Caffeine is not a naturally occurring substance in plants found in Southern California, she said. "In the southeastern states, there's a plant that produces caffeine but it can't survive in our soils.”

Where is it coming from? You only have to be passed on the trail by a hiker clutching an energy drink…or wait in a line of vehicles full of half-awake fishermen sipping coffee while they wait for lake gates to open at dawn to know the answer.

"The fact that we're finding it in streams and watershed that are used for recreation tells you that people are urinating in them," Nagoda said. "People really do need facilities in more places."

Richard Scott Turner — whose first book in the Jerry Schad Afoot and Afield in San Diego series is being released in March — says he isn't surprised.

"My guess is that a lot of hikers and trail users who aren't educated on leave-no-trace are peeing into streams or too close to them," Turner said. "I've never seen anyone who let a mile [to a porta-potty] stand between them and peeing."

The data on which the conclusion is based weren't meant to demonstrate that outdoor enthusiasts don't think before they pee. Water-quality scientists test for caffeine to identify sewage spills and leaky septic tanks because it's an easily identified substance and it's clearly linked only to humans. Caffeine also degrades and breaks down fairly quickly — its half-life is 24 hours — so scientists know if a spill is relatively recent, Nagoda said. Those spills and leaks often end up in lakes, creeks, and other bodies of water.

While the water board's scientists were testing for caffeine to identify sewage spills, they noticed something peculiar — and something that made using caffeine to locate spilled sewage useless.

"We found it in so many places where there aren't sewer and septic tanks, areas we know that humans never developed," Nagoda said. "It didn't make a good tool."

But the data showed, too, that remote sites that are difficult to reach, and water in agriculture areas had no detectable amounts of caffeine, according to the study. "There was a huge distinction between remote sites and heavily used recreational sites," Nagoda said.

Caffeine was found at the Barrett and Moreno reservoirs, at Adobe Falls and Cedar Creek Falls, and in Bluewater Canyon. Among the sites with strong caffeine presence: the San Mateo Wilderness area of the Cleveland National Forest. Turner could immediately picture the hikes:

"There are no bathroom facilities at the trailheads and the trails follow very closely to the creeks," he said. "There aren't any facilities near either the fishermen's creek trail or the Tenaja Falls trail."

Turner said that urine contaminating the creeks that feed the San Mateo River is particularly upsetting because the river has a population of the endangered steelhead trout. "San Mateo is one of the last creeks that isn't channelized or diverted," he said.

That humans are fouling it tells him that people need to be better educated on how to behave in natural settings. "It's important for hikers to understand the ethics of accessing these trails," he said. "Some people may not know it's inappropriate to pee into the creek."

The leave-no-trace philosophy includes not peeing within 200 feet of water, according to the website.

Turner says that the Pacific Crest Trail is increasingly marred by human waste, and he's seen some terrible sights there.

Nagoda, who is also an avid hiker, said that she'd like to see a follow-up study. "Obviously, there needs to be more facilities for people.” And, she said, people should be warned that the creeks have been peed in. "It's kind of crazy it's in areas we think are untouched.”

A person of good breeding would never repeat these: https://duckduckgo.com/html?q=jokes%20about%20pee - except perhaps if you find a really good one for Reader readers...

So the problem is?
A different method of measuring sewage contamination needs to be used? Life of rare species are at risk?

If no life at risk then...? What's the problem?

Looks like there were only little over a dozen places this can be detected. High use areas where some educational signs... with all the other signs that can mitigate the "issue",(if it is not really a problem).

The general public likes toilets, even the vault toilets. They like seeing places like Tenaja Falls. They may not need coffee if parking was not so limited they need to get there at 7am just to get parking on weekends. Oh but it is designated wilderness... Well, cherry stem it so the area leading to the falls is not. There was a drivable road there at one time, some may think it should have never been designated wilderness. Some people that could otherwise see the falls by wheelchair may agree. 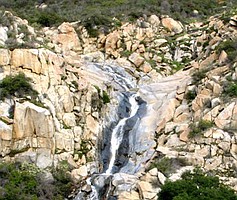 A place everyone should be able to see.