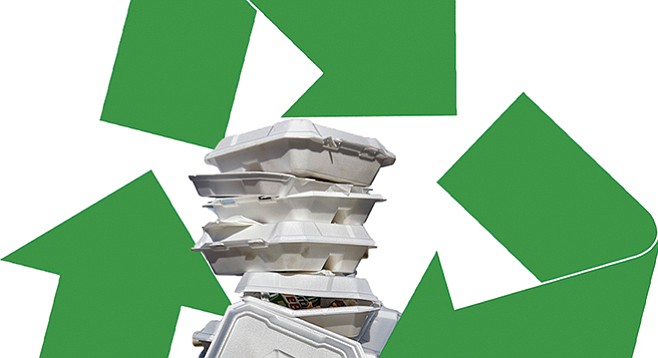 As food containers made of polystyrene continue jamming San Diego’s landfills, a maker of the ubiquitous plastic has been pouring money into the Greater San Diego Chamber of Commerce’s political action committee at a record-setting pace.

A January 25 disclosure filing with the city clerk’s office shows that Dart Container Corp. of Mason, Michigan, kicked in another $20,000 to the PAC on October 25, matching an earlier $20,000 it gave in the first half of 2016. Dart wants recycling considered before San Diego bans the troublesome material, an option the city has resisted. To make its point, the firm has retained the services of lobbyist Clarissa Falcon to “include recycling of polystyrene food containers in the City’s Zero Waste Plan.”

Other special interests kicking in for the chamber PAC include LHR Investment Company, backer of the failed Lilac Hills Ranch ballot measure, with $15,000, on October 28 and Walmart Stores of Bentonville, Arkansas, $10,000 on October 27. Among the expenses listed for the political action committee was a $7500 consulting fee paid to Stephen Puetz, chief of staff to Republican mayor Kevin Faulconer. The candidate drawing the most cash from the group, per the filing, was failed GOP city attorney hopeful Robert Hickey, who lost out to Democrat Mara Elliott.

The GOP Lincoln Club collected a total of $199,185 during the period from October 25 to the end of the year, finishing the 12-month period with a total of $1,097,123 in total contributions and an ending cash balance of $41,338. Among the donations was $5000 received on October 25 from LE Gaming. The operation belongs to Certified Player Corporation of Placentia, which provides so-called third party proposition players, who serve as bankers in cardroom games, including those offered at Chula Vista’s Seven Mile Casino, per its website.

So help me out here; $1,097,123 donated to prevent a ban on Styrofoam food containers? Or is this another of those stories that wanders among many unrelated topics?

It is like Wallmart. People love cheap stuff and don't care about low wages. People want the Styrofoam food container and plastic bag convenience but don't care about the environmental impact. Of course Dart wants to influence the issue as they make the containers. Politicians survive on money so they will jump through whatever hoops they have to to insure the constant inflow of money.