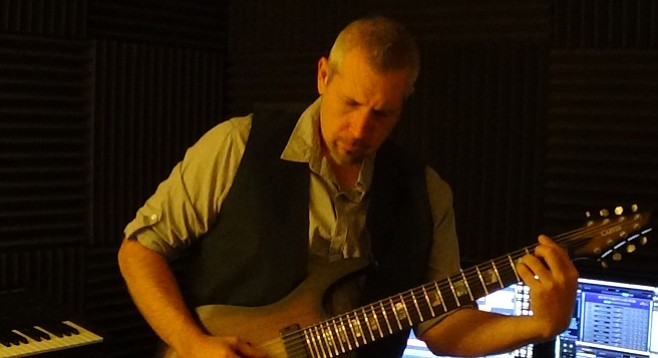 A few seeds of humanity from Matthew Stewart

“The phrase ‘alternative facts’ immediately hit me as being very Orwellian,” says Matthew Stewart, who used the phrase coined by presidential counselor Kellyanne Conway as both title and topic of a new tune currently popping up on the web. “It cuts right to the idea that if facts don’t support your position, you can just make up new ones, and then double down until it becomes the truth to a large segment of the populace.”

“Alternative Facts” was written, recorded, and posted all on the same day, January 22, immediately scoring several hundred plays. “I recorded it at my home studio. The chord progression was something I’d recorded months earlier. It started out as an ambient guitar piece.”

Stewart’s music blends electronics, synths, piano, and rock guitar to create a lush, futuristic sound. His prog-rock tendencies take the forefront on instrumental albums like his 2016 release A World Bathed in Sunlight, a sci-fi concept album he describes as concerning “the destruction of Earth, the escape of a few seeds of humanity, and the discovery of a new world.”

The La Mesa–based musician sees a resurgence, even an explosion, of politically aware protest music. “I think if there’s any time to register your dissent in any form, musical or otherwise, it’s now, when we seem to be on the precipice of a fascist takeover. Of course, it has struck me that this is not ‘safe,’ at a time when one’s every word on social media can be scrutinized by the folks they’re dissenting against.” He reports that “opposition” comments and messages about his song have been extremely vitriolic. “I try not to be hostile in my own comments to people but that isn’t always reciprocated.”

Matthew Stewart appears with the Scratch Acoustic Trio on February 17 at Old Venice in Point Loma.

Another local group, the Resizters, has formed specifically to perform protest music directed at the current Washington administration and its policies - members include Stacey Humphries, Laura Payne, Jeff Musserm, Melanie Peters, and others - http://www.sandiegoreader.com/bands/resizters/