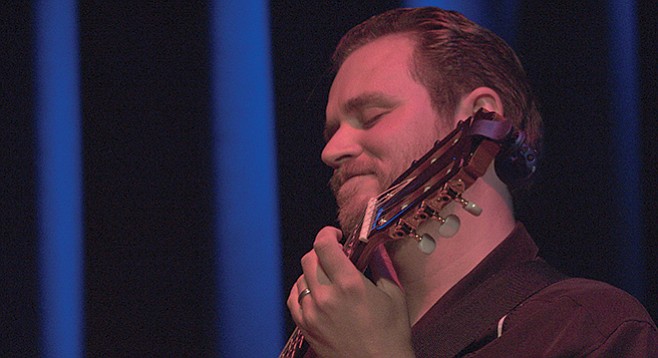 If you’re making art and getting paid for it...

You don't do anything when you're comfortable.

Guitarist William Wilson loves his children too much to suggest they follow in his footsteps. “It’s too hard,” he says flatly. Still, “the other day, I was talking to a banker, and when I told him I was a guitarist, he said, ‘Oh, I’m thinking about going into music. I need to buy a saxophone; I just haven’t gotten to it.’ On the one hand, he’s far better off than I am financially. But at the same time, he’s never going to do anything with music because he’s too comfortable. You don’t do anything when you’re comfortable. If you’re making art and getting paid for it, I think you’re hugely successful.”

The perennially uncomfortable 38-year-old Wilson, who took lessons from Peter Pupping while growing up in Encinitas and studied under Fred Benedetti at San Diego State before settling in Casa de Oro, says that “most of the musicians I know who are ‘making it’ are doing it from multiple revenue streams — even the biggest names in town.” The first, for him, was performing. He landed his first wedding at 13; at 14, his first regular gig at Miracles Café in Cardiff, thanks to an employee who invited him to play one or two songs on a Sunday morning. (“It was a wonderful spot, right next to the train tracks.”) A year later, he became one fourth of the Peter Pupping Quartet and started playing for corporate events.

“Peter had some great connections; big-name banks would fly into San Diego and we would play for them. A lot of cocktail hours — drinking is usually involved with my music. Because I started young, by the time I was in college, I was already making as much as any other job I could have had at that age.”

The banks stopped flying in after the 2008 recession, “so I made a conscious effort to establish myself more online, which has paid off.” Talent is nice, and Wilson thinks he offers a “warm, pleasing tone and a song-like, expressive quality — a shaping to the phrases.” But there’s lots of talent in the world. “I’m always thinking, How are people going to find me?” For starters, “There are a lot of event sites, places like GigSalad and WeddingWire. You post your photo and your sound samples, and you get reviews from past clients.” Today, “Ninety five percent of my performance work comes because people Google and find me on one of those sites. I do about 25 gigs a year, mostly weddings. It’s not my main source of income, but it’s a big part.”

Besides performing, “almost everybody teaches at some level. I teach three days a week for about 15 hours; half kids, half adults. I get students mostly by word-of-mouth,” thanks in part to his role as co-founder (with Pupping) of the Encinitas Guitar Orchestra.

“We have 35 to 40 players, ranging from professionals who act as coaches to people still struggling to read music.” Participants pay a fee and commit to 12 rehearsals, with a public concert at the end. “It’s a wonderful educational tool. The students get to perform without being the sole focus; they learn from the players around them; and they learn to play in time. And it supports the teaching, because if you’ve got to play a concert for your friends in three weeks, you’re going to practice.”

But 15 years ago, before the orchestra, he used to post flyers. “My office is still up in Encinitas, and I dropped a stack in a laundromat situated right next to Rancho Santa Fe.” A retired financial man picked one up, “became my student, and went on to become my patron. Through the lessons and experiencing my music, he became a believer in what I had to offer. He saw what I was doing with the orchestra and with my solo playing as promoting the guitar in San Diego — a direct application of his money to the arts. He helped the orchestra record an album; he bought me a concert-level guitar; he paid for my [garage] studio and a lot of my recording equipment.” All told, “in the neighborhood of $15,000.”

The studio and equipment allowed for further sponsorship from other believers in what Wilson had to offer. He has made his last two albums with funding from Kickstarter; the first, a series of Spanish dances by the Spanish composer and violinist Pablo de Sarasate that Wilson arranged for guitar and performed ($2750); the second, a collection of original flamenco pieces for guitar and ukulele entitled Flamencolele ($2503). In both cases, the goal was to create “something remarkable that pushes things forward and advances the art. People are interested in what’s new. Everything I’ve ever done that’s been even marginally successful has had that quality to it.” The Sarasate dances had never been played on a guitar. “And there are a handful of people who have recorded classical Spanish guitar on a ukulele, but not flamenco. I thought, Let’s take this and see if there’s interest in having this type of music done on what is right now a very popular and fun instrument.”

The inspiration came from a ukulele-loving student whose mom wanted him to learn guitar, but it fit with Wilson’s tendency to cycle through styles. He cites B.B. King as an influence and still has the cassette tapes Pupping used to make for his students — “all different guys, all different types of guitar. I listened to them endlessly.”

“People used to say, ‘Oh, I love your music; I put it on when I go to sleep.’ At first, I was insulted: ‘Thanks a lot. My music puts you to sleep.’ Then I thought, Why fight it? I went on Google and I typed in ‘music for’ and looked at the auto-suggestions. Right after ‘music for cats’ was ‘music for sleep.’”

His subsequent album Classical Guitar Music for Sleep and Relaxation is approaching a million paid streams on Spotify, “which frees me up to spend more time recording” — perhaps music for cats.