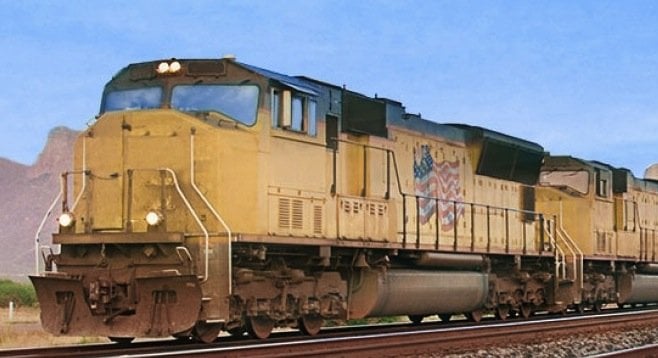 Big things are happening on the binational railroad — unfortunately, they are transpiring in courtrooms and not on the 108 miles of track that stretches from Tijuana up through the border at Campo and into Imperial County.

In the past month, Pacific Imperial Railroad — which leases the publicly owned 70-mile stretch of track in the U.S. from Metropolitan Transit System — filed for bankruptcy and is now in bankruptcy hearings.

More recently, on January 31, a group of the company's shareholders filed a lawsuit against the current president and former president for making deals behind their backs in order to push them out. The latest lawsuit is one of many the company is fighting.

Meanwhile, officials from the Metropolitan Transit System continue to remain onboard with the company, despite the lawsuits and its failure to meet numerous milestones put in place to ensure the company is not using the railroad as a vehicle for fraud.

On January 31, a group of shareholders associated with three Nevada-based companies sued Pacific Imperial Railroad president Arturo Alemany and former president and attorney Donald Stoecklein, alleging the two hatched a plan to seize control of the company from them.

In the complaint, majority shareholders Dwight Jory and Charles McHaffie (themselves no stranger to controversy) say the hostile takeover began shortly after Alemany was hired to help broker a joint-venture agreement with Mexican nationals who operate Baja Rail and the 38-mile track south of the border. Jory and McHaffie say Alemany had been working with Mexican railroad executives all along in an effort to transfer the Desert Line's lease to the Mexican company.

As Alemany was allegedly negotiating with Baja Rail officials behind closed doors, former attorney and ex-Pacific Imperial Railroad president Donald Stoecklein was busy creating two shell companies formed for the purpose of wresting control of the company and its assets from McHaffie, Jory, and other shareholders.

That plan unfolded in June 2015 when Alemany and Stoecklein announced wealthy New York investor Charles Fletcher agreed to purchase 130 million shares of the railroad’s stock at a cost of $116 million — the agreement fell through.

Meanwhile, the two companies created by Stoecklein — Inter-Zone and Conatus Capital — were formed, according to the complaint, "for the sole purpose of buying majority interest control from [McHaffie and Jory] and taking advantage of the huge upside potential in value Alemany expected to realize from his secret investment contract with Baja Rail."

Instead of Fletcher purchasing majority shares, it was Alemany and Stoecklein's newly created company, Conatus Capital (which, after some controversy, changed its name to Pacific Transportation Investments) agreed to buy the majority of shares. But claims that Conatus was tied to wealthy New York investors appeared to be false, says the lawsuit. "In fact, neither Alemany nor Conatus had such operating history, financial backing or relationships. Conatus was just a storefront corporation formed weeks before in Nevada."

In May 2016, Alemany announced an agreement with Baja Rail that provided that the Mexican company pay $3.85 million to sublet the Desert Line from Pacific Imperial Railroad.

Shortly after filing for Chapter 11 last year, Alemany and officials at the Metropolitan Transit System announced that Baja Rail intended to purchase the lease from Pacific Imperial Railroad. The proposal is now being considered by a bankruptcy court judge.

The allegations set forth in the recent lawsuit were first mentioned in an opposition filed by Mark Maasch, an attorney representing Pacific Imperial Railroad as well as McHaffie and Jory.

In a statement, Maasch claimed that there was no reason to file for bankruptcy because at no time did a creditor threaten the company with litigation. It's then that Alemany's new attorney, Alan Vanderhoff, informed Maasch that the bankruptcy was needed in order for Baja Rail to purchase the company.

"Mr. Alemany’s decision to sell PIR’s assets to Baja Rail based on a liquidation value is a breach of the trust people reposed in him to shepherd [Pacific Imperial Railroad] for their mutual benefit."

Since entering into a 99-year-lease with Pacific Imperial Railroad in 2011, Metropolitan Transit System officials have defended the company and continued to collect the $1 million annual lease payment, despite its poor track record and dozens of lawsuits between aggrieved investors and infighting among the company ranks.

At a January bankruptcy hearing, an attorney for Metropolitan Transit System told judge Laura Taylor that the transit system supported the proposal from Baja Rail to buy Pacific Imperial Railroad. The attorney admitted that, as of now, Pacific Imperial Railroad has failed to meet any of the milestones set in the lease and has not submitted plans to repair bridges and tracks.

MTS responded to a request for comment but not in time to be included this article; a follow-up story about MTS and the binational railroad will be published today.

MTS is entrusted with the U.S. stretch as a public asset and therefore compelled to maximize its use to and returns for the public. But instead, they've let Alemany and the Forty Thieves break the lease by skipping every performance-based test, and let the railway continue to disintegrate, just so long as they got the $1M annual payment. So far, one could defend this as simple incompetence.

But now MTS is letting this broken lease be claimed as a private asset, and the entire $1M a year/99 year deal bought out at bankruptcy rates of pennies on the dollar, with the difference pocketed by the swindlers, as a reward for literally doing nothing for over three years?

At this point, one can only assume that there have been kickbacks to high MTS officials, as reaching this height of absurdity requires a criminal intelligence that garden-variety stupid can't explain.