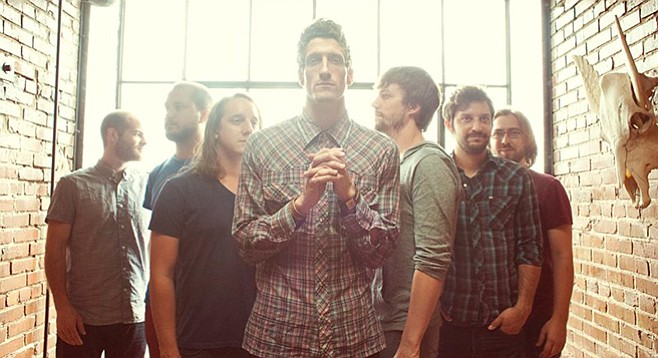 Indie rockers who have discovered soul and R&B and, in their own DIY way, have revitalized that music

The Revivalists (no, they don’t live up to their name, but we’ll get to that later) are among the crop of indie rockers who have discovered soul and R&B and in their own DIY way, have revitalized that music without being perfunctory or in the least bit historical. The Revivalists are a seven-piece touring and recording unit with sax, pedal steel, piano, and the usual guitar-bass-drums that is bursting at the seams with various musical ideas, from reggae beats to Al Green funk to anthemic U2–like stuff. That musical mix-up is what draws them a following. This is a band that sold close to 20,000 copies of their last CD, a number that is puny by the music-industry standards of old but in today’s world is considered borderline phenomenal.

The band’s creation mythology begins in New Orleans with a chance meeting between guitarist Zack Feinberg and singer/guitarist David Shaw. Feinberg, as the story goes, took a wrong turn on his bicycle. He rolled past Shaw, who was strumming guitar and singing on his front porch. A conversation ensued. Jamming followed, and then came a drummer named Andrew Campanelli, and then there were gigs as a trio. The next year, a self-release earned them positive industry attention, better gigs, and in short order, four new members. But revivalists? Not so much.

When you put the words Revivalists and New Orleans in the same sentence, all sorts of ideas come to mind, about Dixieland or second-line jazz or the bluesy music of the French Quarter, none of which this band even comes close to. The name suggests some kind of bygone orientation, but in reality, this is a roots-oriented groove-based jam band — sort of. Rolling Stone magazine decided that the Revivalists were among the “Ten Bands You Need to Know” last year. I agree. This is music that can move a crowd.